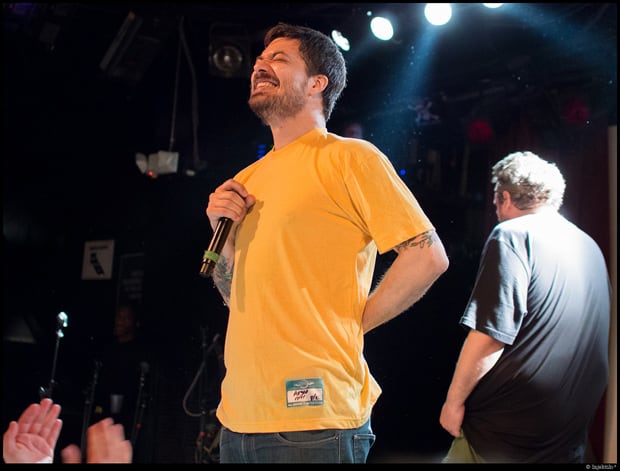 If someone tells you that Aesop Rock’s July performance in Portland was hot, they could just as easily be talking about the Wonder Ballroom itself rather than the performance. As rare thunderstorms encroached in the Oregon skies, an unusual stickiness coated the city in something like a shellac coating. The venue itself, normally cool with its high ceiling and exposed wood beams, churned like a pressure cooker. Not only was the heat undeniable but the crush of the crowd, loyal to Aes despite a five-year gap without a new record (unless you include last year’s Hail Mary Mallon collaboration with Rob Sonic and DJ Big Wiz), came out in droves, packing nearly every usable inch of the club.

Aesop Rock has returned with the excellent new record Skelethon and came ready to perform his most recent compositions. Fans hoping for a bevy of chestnuts from Float, Labor Days and None Shall Pass came away disappointed (I heard at least one dude bitching about the setlist on my way out), but for those ready for Aesop Rock circa 2012 rather than a greatest hits tour could easily see that Ian Bavitz hasn’t rusted during his hiatus.

Rob Sonic and DJ Big Wiz joined Aes as he ripped through a set heavy on Skelethon and Hail Mary Mallon. Beginning with “Leisureforce,” Aes took the stage with a massive dose of energy and it wouldn’t take long before his orange T-shirt became completely soaked through with sweat. Heat aside (and Aes did complain a few times about how fucking hot it was that night), the threesome gave a firecracker performance. New songs “Crows 2” and “Homemade Mummy” already made enough of an impact to incite a crowd sing-along. During “Racing Stripes,” the crew brought a volunteer up on stage and shaved his head (well, cut out sections with a clipper), the whole time reassuring him, “It grows back.”

“Smock” wouldn’t be the only Hail Mary Mallon song the trio performed that evening. The ominous “Grubstake” leant itself well to the club’s claustrophobic conditions and “Meter Feeder” showed up as a late set surprise.

As a performer, Aes can quickly change from smiles to sinister, suitably matching the songs of the same caliber. Unfortunately, it took him about half the set to realize the on-stage camera was projecting not much more than his ass onto the screen behind him, a snafu he played off with comical sangfroid.

So is putting fans through a set full of new songs, one mainly devoid of hits (they did play “Daylight” at the end), an unwise move? It’s not really up to us what an artist decides to perform. I would rather see a set of new music where the musician is excited rather than a paint-by-numbers night of favorites. Aesop Rock is a musician who does things on his own terms. Skelethon is home to a few future classics. It made me appreciate seeing them in their earliest live form, still full of excitement and not yet marred by the attrition of nightly use.