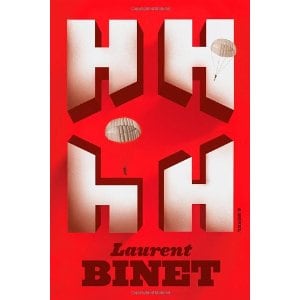 [xrr rating=4.5/5]Laurent Binet’s historical novel HHhH engages in the sort of haphazard postmodernism that has by now become a gimmick and a dead giveaway for authorial laziness. Binet uses his reflexivity as so many others do: to absolve himself of stilted writing choices by acknowledging their hackneyed cliché. As if one could avoid a vehicular manslaughter charge for admitting after running someone over that such a thing is very bad indeed. However, the author takes this overdone trick one step further, having his metatextual fun but also critiquing both his main narrative and his distractions. Writing about World War II, perhaps the most written-about event in human history, Binet routinely points out the legions of errors, liberties and shortcuts that riddle like-minded books, but he does so in the sincere quest to honor the heroism, sacrifice and stranger-than-fiction truth of his chosen story.

Binet’s subject concerns the assassination of Reinhard Heydrich, not the Nazi who immediately comes to mind when one typically thinks of a high-ranking subordinate of Hitler’s and yet perhaps the most dangerous of them all, maybe even above Der Führer himself. Heydrich was the true architect of the Holocaust—the title is short for “Himmers Hirn heißt Heydrich” or “Himmler’s brain is called Heydrich”—but also a man who operated with such meticulous banality that he does not stand out among the freak show that is the Nazi upper echelon. Because his name does not appear as often in various overviews of the war, Heydrich’s rise and his fall at the hands of two Czechoslovak operatives offers the chance to tell a relatively unknown, yet crucial, turning point in the war.

To get to the details of that assassination, however, the reader must first wade through Binet’s rambling thoughts on everything from his conjecture (and critique of same) of imagined conversations and inner moods to his regular reminders of how much he loves and has researched Jozef Gabčík and Jan Kubiš’ story and how he deeply desires to do their mission justice. Even when Binet gets down to the true plot, he routinely digresses to argue with his process, fuss over details and simply insert a quick anecdote that has little, if anything, to do with the narrative but is too good not to mention. Such stories range from a dog following around one of the operatives to the truly arresting account of a Czechoslovak team who refused to lose an exhibition match to their Nazi occupiers and were mostly executed for their impudence.

Taylor’s translation retains so much of the informal, scattershot nature of Binet’s writing—as well as the almost Czech sense of humor with which the Czechoslovakophile Frenchman brings to the novel—that I did not realize how tightly HHhH had gripped me until suddenly even the dissonant, self-referential breaks worked to elevate the tension. When Binet at last gets to the assassination attempt, his asides rise to a fever pitch, to the point that he repeatedly writes variations of, “The big moment’s coming right up!” This should completely spoil the suspense, but instead it only compounds the sense of anxiety, dread and desperate hope that someone, anyone, can take out the monster brought to light in the preceding pages.

Thus, the deconstructive, piss-take variant of the WWII novel emerges one of that genre’s finest examples in ages. The marriage of an overdone style with an overdone subject should be a colossal failure, but somehow the author has revitalized both, even if he does so with such idiosyncrasy that no one could possibly follow him. The question of whether Binet will be able to pull off his goofball jumble of earnestness and peevishness makes for as many thrills as the true story it laboriously reports. His division of the writing into micro-chapters and his instinct for audience manipulation result in great dramatic chapter stops every other page. But if Binet gives his readers so many easy places to take a break on each page, he also makes it impossible to put his book down.