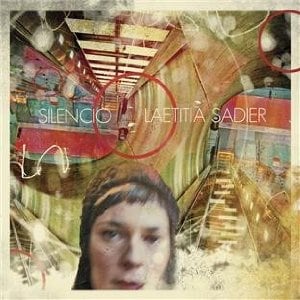 [xrr rating=3.75/5]Hot on the heels of another Stereolab alum’s release, Joe Watson aka Junior Electronics’ Musostics, back in April, Stereolab vocalist Laetitia Sadier has released the unexpectedly titled Silencio. But whereas the former release resembled their parent bands’ only insofar as the instrumentation did, keys and synth deconstructed, wrenched from sonic holism and stood up on their own, Sadier’s is very nearly a neat extension of Stereolab’s output. In relentless motorik rhythm, savory lounge swagger and tropicana, Silencio refreshes the thread binding Sadier’s first solo record, The Trip, and the final effort of the band (on hiatus since 2009), 2008’s Chemical Chords.

This should come across as hardly a revelation. Sadier’s dynamic creative presence has colored the music of Stereolab as much as Beth Gibbons does Portishead’s. Her highly charged lyrics and unique tonalities have lent Stereolab’s sound its strongest character, anchoring it along the way, from Mars Audiac Quintet apex “Transporte Sans Bouger” to the ceaseless highs of 1996’s Emperor Tomato Ketchup and even later standouts such as Margerine Eclipse’s “Vonal Declosion.”

In keeping with this pattern, her second solo outing is more expansion than departure creatively, despite slower tempos sprinkled throughout. “The Rule of the Game” fits in as an opener as common as any late-coming, patiently turning breezer in Stereolab’s discography. Making “paving the way to fascism” sound pleasant, as idyllic as a quiet, leafy suburban street in a 1960s newsreel, the song speeds to a locomotive finish in time to hand the reins to “Find Me the Pulse of the Universe.” The latter’s off-kilter charm, shakers and streaks of bossa nova filling in the gaps between guitar and piano lines, unfolds like the rocket-fueled successor to 1994 Stereolab track “Des Etoiles Electroniques.”

Lyrically on Silencio, Sadier mines much the same political territory as elsewhere in her career. The scathingly populist “Auscultation to the Nation,” slanted pop slide and punk verses drowned in a throwback soup, sounds like the kaleidoscopic, deconstructive adaptation of something far grittier. “What do we care about these self-proclaimed authorities?/ Rating agencies, financial markets and the G20s/ Were not elected by the people/ In the name of what are we letting them govern our lives?” runs the refrain that anyone with a passing interest in any form of protest music would find familiar.

“There is a Price to Pay for Freedom (And it isn’t Security)” follows less political lines in content if not in title, but features some of the album’s most dynamic arrangements. Shimmering, textural intro an eerie ’80s doppelganger, its open-handed guitar work fits in snugly with 21st century dream pop while synth rises out of waves of bowed reverb and chords bent out to infinity. Follow-up “Moi Sans Zach” strikes at the Gilberto Gil vibe evoked earlier on the album. Ringing out in personal chords wistful in tone but bubbling in cheery accompaniments, Sadier’s signature, ever-present wordy playfulness skips on the percussion’s taut surfaces.

One of several tonal and tempo shifts on Silencio comes with the living, breathing “Fragment pour le future de l’homme.” Its relentless pulse brings hints of Afrobeat, and South Africa through the lens of David Byrne, to the foreground, Sadier’s vocals counterpoised against a baritone mirror. Having hit peak intensity, the casual downhill motion of Silencio’s last quarter (hints of Yo La Tengo evoked in the tight pop of “Next Time You See Me”) runs smack into the stunning “Invitation au silence,” Sadier’s spoken word vocals, translated in real time and a cappella, reverberating somber and rich off interior church walls. It’s exactly the sort of understatedly surprising material that has long been associated with the Stereolab brand, and which Sadier has clearly taken careful pains to ensure Silencio is awash in.