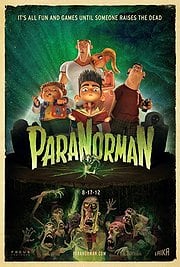 [xrr rating=4.0/5]Laika has some high expectations to deal with. Their stunning debut feature film, Coraline (2009) won over critics around the world and was a surprise box office smash, raking in over double its budget. But three years later, the Portland-based studio has lost director Henry Selick and sophomore efforts can be an iffy proposition. So how is ParaNorman, their follow up feature? Is it as amazing as Coraline? Are the stop motion effects as distinct? Is it as weird and frightening and funny?

In short, the answers are: pretty great, not quite, definitely and almost. As for the story, ParaNorman is clearly written by horror movie lover, for horror movie lovers. There’s a plethora of jokes, both subtle and brash, for the horror aficionado, most hilariously when a cell phone plays a certain famous movie theme. It even cold opens with a quick bait and switch, a zombie flick (with amusing cheap effects within the vivid stop motion animation) that turns out to be a movie within the movie being watched by the titular Norman (Kodi Smit-McPhee) and his grandmother. Here’s the thing, though: Grandma (Elaine Stritch) is dead and he’s chit chatting with her ghost. Norman can see and talk with ghosts (which apparently are everywhere and pretty friendly), but that doesn’t go over well with his parents (Leslie Mann and Jeff Garlin). Or anyone else, really. Norman’s an outcast in a town obsessed with a three hundred year old witch trial, his chief bully being the dim-witted Alvin (Christopher Mintz-Plasse) and his only friend being the preternaturally cheerful and rotund Neil (Tucker Albrizzi). Norman seems resigned to his fate, living in a solitary world of horror films and cheerful ghosts.

But his crazy uncle (John Goodman) has other ideas. Apparently the witch trial which every single business in town has named itself after (resulting in a blur of punnery) was a historical event with some freaky consequences. Specifically, every year on the anniversary of the witch’s death, a single person has to keep her dying curse from coming true, and Norman’s the new carrier of duty. That curse? It brings back her seven killers from the grave, as zombies, naturally.

ParaNorman manages to produce quite a few moments of both horror and humor from the combination of zombies and witchery, and interestingly, some genuine tragedy. There are a few twists that are best not to spoil, so suffice it to say: anyone can become a bully and both zombies and humans are easily confused. ParaNorman mines much the same territory as its big sister, but manages to have a distinct tone of its own. This is in part due to the source material; Coraline was adapted from a Neil Gaiman story, while ParaNorman was originally pitched as a Disney movie from a story by Arianne Sutner and Stephen Stone. Accordingly, much of the same atmosphere of slowly building creepiness surrounds ParaNorman, but is heavily laced with a joking, slapstick mentality. Often it works; sometimes it falls flat. At times, it feels like directors Sam Fell and Chris Butler are not sure whether the movie should be comedy that veers into horror, or a horror movie with self-affirmation messages leavened with jokes. In particular, they have a strong tendency to punctuate any dramatic moment with a brief joke, which tends to deflate the tension. But combined with beautiful visuals and moments of genuine terror and emotion, it comes out ahead, if slightly schizophrenic.