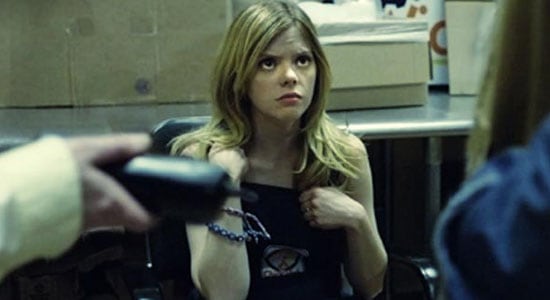 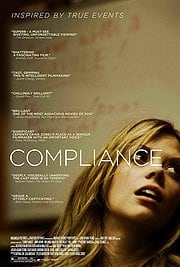 In Compliance, writer-director Craig Zobel puts both his characters and his audience through 90 minutes of squirmy hell. A prank call to an Ohio fast food restaurant (Chick-Wich standing in for McDonald’s) leads to the degradation of a teenage cashier, and Zobel forces us to watch every painstaking minute of it. While his main focus is to force us to ask ourselves what we would do in a similar situation, one where a presumed authority figure is commanding us to do things unsavory, Zobel makes one really bad decision early on that takes the teeth away from Compliance.

Fast food restaurants are already a loaded trope in movies, places of mediocrity where we knowingly eat shit and don’t care. As Compliance begins, we meet Sandra (Ann Dowd), the middle-aged manager of the Chick-Wich, as she is beginning reprimanded by her supplier. Someone had left a freezer open the night before, spoiling thousands of dollars of food and rendering the restaurant short on bacon and out of pickles just before a major dinner rush. Sandra is the queen of her domain. She hates having her authority questioned and is rattled by this haranguing. Soon, she receives a telephone call from someone claiming that he is a police officer. He informs Sandra that one of her cashiers, Becky (Dreama Walker), has stolen money from a customer and that she must detain her until he can show up and take over the situation. Sandra dutifully takes Becky into the back of the restaurant and then the terror really begins.

Zobel plays his hand too early, revealing that the so-called Officer Daniels (Pat Healy) is actually a deranged prank caller who capitalizes on our inherent inability to question authority, whether real or perceived, and simply comply. As the film wears on, the caller’s demands get more outlandish and soon enough Becky is naked and humiliated.

Compliance is not easy to watch and as Becky’s degradation worsens, Zobel does not allow us the luxury to look away. While Sandra obediently follows the caller’s sickening instructions, he is also condemning us for watching as Becky bares her breasts or bends over so Sandra’s boyfriend can examine inside her body cavity. However, unlike the characters in the film, we know that the caller isn’t a policeman, a decision that completely undermines the impact of the movie. Yes, a big reveal at the end may have been melodramatic, but our own judgments are hijacked early on. It’s easy to call Sandra and the others “stupid,” but that’s because Zobel blesses us with the omnipotent sight that they do not possess.

As Compliance begins a title placard informs us that it is inspired by true events. After some research, I found that Zobel has more or less re-written the true sequence of events (which are caught on security tape) down to the minutiae (changing names and places), except the real life story is even more gripping. There is even an exciting capture, trial and acquittal of the perpetrator, but Zobel opts to leave most of that out of his film. Why? By couching the story further in truth, Zobel could have teased out the story’s nuances more.

As the movie progresses more and more people are duped by the faux Officer Daniels. It makes you wonder when a person with some common sense will finally step up. When the prank caller asks one man to describe Becky’s nipples, the blame transcends simple compliance. Zobel may demonstrate that the invisible rank and file that keeps our society in line can be easily exploited, but next time maybe he shouldn’t choose such an unpleasant vehicle to drive his point home with.