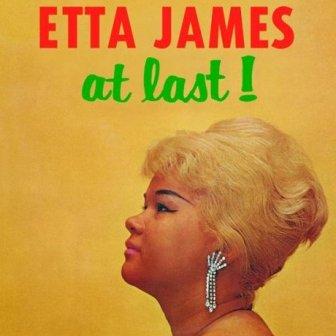 In the few years prior to her death, Etta James had largely been reduced to the occasional news story that documented her declining health at the hands of both Alzheimer’s and leukemia while paying lip service to her musical impact. And when she died in January 2012, something very predictable happened: she got popular, as the mainstream press and fellow musicians showered her with a level of recognition she hadn’t received in decades. Eulogies were written and memorials poured in from around the world, file sharing sites were flooded with James’ concerts and her funeral was attended by several generations of performers who, one hopes, were there to pay respects to James and not for the free publicity.

If there’s anything good that comes out of these posthumous career resurrections, it’s that they sometimes lead to serious reappraisals and a renewed appreciation of an artist’s work. For Etta James that should begin with the covers collection At Last!, her debut solo effort released in 1961 after a short stint with the Peaches that most notably included R&B hit “Dance with Me, Henry.” It’s all too tempting to see the influence of James’ rough childhood – born to a 14-year old mother and a father who’s never been identified – in the songs featured here, even though it feels a bit too much like armchair psychology. Whatever the reasons for the songs chosen, what’s most striking today is how easily the singer fits into the moods of these tunes, able to sound young or old, troubled or satisfied depending on the subject matter.

At Last! is essentially an exploration of love and the various emotions that follow, and James sounds wiser than her years throughout. It is an album that showcases James’ raw talent; on songs like “My Dearest Darling” and “Girl of My Dreams” her voice is too intense for the sonic limitations of the period as it becomes distorted at times. Her vocal range is astounding: after opening with the bluesy lament of “Anything to Say You’re Mine,” she takes a playful, controlled vocal approach to “Trust in Me” and then embodies all the pain and misery of rejection in the classic doo-wop wedding drama of “All I Could Do Was Cry” and the exceptionally depressive “Stormy Weather.” James reverses gender roles in Willie Dixon’s “I Just Want to Make Love to You,” also clearly having fun with the song’s double entendres; she later does the same with the far more traditionally romantic sentiment of “Girl of My Dreams,” here sung as “boy of my dreams.”

The album also contains two of James’ most famous performances, the whimsical jazz standard “A Sunday Kind of Love” and the breezy and joyful “At Last,” the album’s namesake and one that took on a more somber meaning once it was sung at her funeral. Still, the orchestral arrangements that litter the album do sound generic, and almost like they were thrown in because, well, there had to be some type of accompaniment. The backing vocals that punctuate certain songs are similarly distracting, and at their worst, detract from James’ singing. This is most apparent on “All I Could Do Was Cry,” a solitary song of grieving whose impact is deadened by its too-prevalent background vocals, and on the up-tempo, and somewhat silly, “Tough Mary.”

James left behind a lengthy and impressive body of work; sadly, while she was alive, her tumultuous personal life and problems with drug addictions invited the wrong kind of media attention. Only time will tell if her death will lead to an increased interest in Etta James’ catalog; like other artists who recorded a lot of material and lived to an old age, to some extent they’re taken for granted as the years roll by, with commentary on them usually cursory and focused on the fact that they were “influential.” This tends to depersonalize the artist, reducing them to little more than another flashpoint in the history of music. Even though the album consists of songs James didn’t pen, At Last! marked the first significant glimpse into the singer’s views on life and love, views which she’d further explore and refine throughout her career.