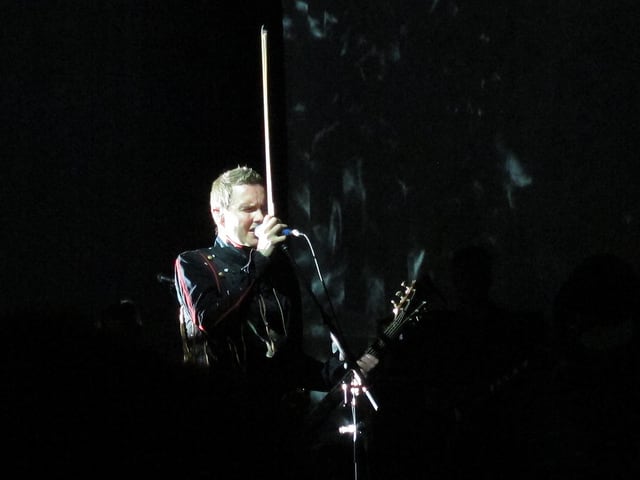 A Sigur Rós concert in 2012 is a very different affair than one from 10 years ago. Although the band’s sound has remained more or less constant, the mysterious aspect that once clung close to the group like an Icelandic ice floe has been whittled away via song licensing to soundtracks and the inevitable exposure that comes with such a level of fame. Things that were once novel (They sing in a made up language! He strums his guitar with a violin bow!) are expected constants at concerts. With that mystery stripped away, Sigur Rós may not have the same rapturous allure that drifted in with Ágætis byrjun 12 years ago, but they still put on a damned fine show.

Opening on the West Coast portion of tour was Julia Holter, a rising artist who deals in the mystery that Sigur Rós peddled more than a decade ago. Supporting her fine new record Ekstasis, Holter put on a brief but memorable opening set. Her music borders on the ascetic, finely wrought songs of introversion that may have felt out of place at an open air show on a fine summer night. The 6:30pm start time, Pacific sun still blazing away, didn’t do too much to add ambiance, especially for music best suited for a dark rock club.

The garish light didn’t appear to faze Holter who played a 30 minute set with her keyboard and drummer in tow. Decked out in a shimmering dress, Holter played a handful of Ekstasis songs that felt cracked-open, much freer than the sometimes claustrophobic conditions of the record. During “Marienbad,” for example, Holter began singing in sharp staccato notes, her affected vocals reminiscent of Nico. But unlike the version on the LP, the song opened wide before ending with drummer Corey Fogel’s quiet clatter of symbols.

Holter finished her set with “Moni Mon Amie” and “Goddess Eyes II.” The piano felt more invited on “Moni Mon Amie” than the version on Ekstasis, as if Holter has stepped out of the insular world she has created and offered us a glimpse inside. The slow-burning “Goddess” was the perfect transition for Sigur Rós, lingering for the 30 minute break between sets.

Sigur Rós hasn’t toured the United States for nearly four years but have returned to promote new record Valtari. With keyboardist Kjarri Sveinsson sitting out this tour, three quarters of the original band, backed by a slew of musicians and six-piece string ensemble, put on a dynamic two hour show, playing favorites that concentrated most heavily on Ágætis byrjun and Takk… With Valtari receiving mixed reviews, Sigur Rós debuted only two new songs, beginning the show with the quiet “Ekki Múkk,” so demure that it barely registered. But when the familiar sound of “Svefn-g-englar” chimed, the crowd roared and Sigur Rós began to prove just why they can easily sell out large venues.

I have seen Sigur Rós in dark theaters and at 1:30am at festivals, but during the daylight it all seemed out of sync with their sound. The first half of the set concentrated on gentler songs such as “Olsen Olsen” and “Andvari” and at times I found myself more interested in watching the blissed-out woman on the side of the crowd during yoga poses. But when the band exploded into the darker territory of “Í Gær,” my attention returned front and center.

Lead singer Jónsi Birgisson seems more extroverted these days, as if his solo album and tour has pushed out into the world. He wore a deep maroon shirt with tassels and although he rarely addressed us, he rocked harder with his mouth wide open, shouting during the heaviest moments.

The sun finally began to go down around the time the band played “Vaka,” the gloaming adding an appropriate funereal effect to the show. Then we could see the smoke and the lights and only then did it truly feel like a Sigur Rós show. Among the standouts in the main included “Sæglópur,” a rousing version of “Festival” and the gorgeous new song “Varúð” which featured haunting backing vocals from the female ensemble at the rear of the stage. The band ended the first section of the show with “Hafsól” and took a brief break.

Sigur Rós saved the best for last, however, closing the show with “Popplagið,” the slow-burning closer from (). As the song built to its pounding climax, some people gasped around me in disbelief. It is songs like “Popplagið” that make a Sigur Rós concert such a memorable experience. Julia Holter may have filled in the missing bits of mystery, but Sigur Rós can still put on an amazing show, even in the sunlight.