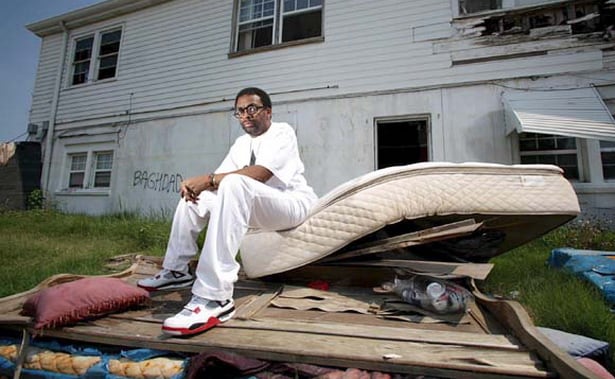 In many ways, Spike Lee’s 2006 documentary When the Levees Broke: A Requiem in Four Acts stands as the ultimate summary of the filmmaker’s career. At the very least, it serves as the nonfiction foil to Do the Right Thing. Both films show Lee at the respective peaks of his fictive and documentarian forms, his style and narrative focus honed to maximum visceral effect. Both are documents of a turbulent, ambiguous present rather than a completed past that offers easier analysis and judgment. Most crucially, both sublimate the director’s key theme of racial tension in America into an all-consuming rage and despair. True, When the Levees Broke might present a few clear targets for blame where Do the Right Thing exists in a maelstrom of universal hate, but these two films best capture Lee’s sense of racism and class conflict as insoluble, hopelessly ingrained facets of our society that occasionally surface in the most repugnant fashion possible.

Lee broaches this subject as it relates to the response to Hurricane Katrina with uncharacteristic patience. He treats the encroaching hurricane like a narrative force, his assembly of talking heads recalling the sense of foreboding as news reports offer updates on the storm’s gathering power and its redirection toward the Gulf of Mexico’s most vulnerable spot, the below-sea-level New Orleans. Now seven years removed from the event, these clips of cautioning weather programs and the vivid recollections of those watching the impending destruction retain their sense of urgency and dread. Indeed, were the film merely a recounting of the hurricane’s approach and landfall, When the Levees Broke would be a gripping, if standard, documentary. 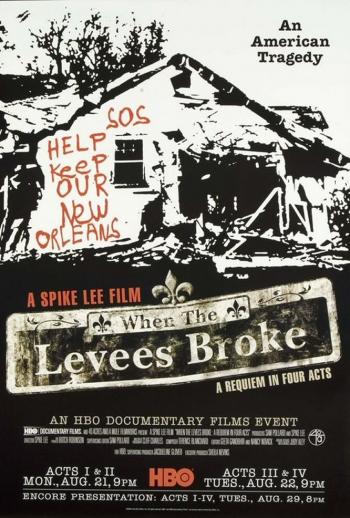 Yet as the requiem moves through its acts, the bewilderment and fear that greeted the sheer force of the storm gives way to outrage and bafflement over the infamously heinous response of the government, and those on the ground are whipped into a frenzy. Kathleen Blanco, then-governor of Louisiana, holds a press conference in which she laments that large-scale tragedies tend to bring out the best in people, but Katrina elicited the worst. Lee carefully contextualizes her clucking disapproval of the street crime with the mood of those left behind on New Orleans’ flooded streets. With no help arriving for those stranded, with the president himself complimenting the pathetic work of the flunky he let run FEMA, what could “the rules” possibly mean to anyone anymore? Further hammering home the sense of disconnect for the predominantly black population of the city displaced by the storm is their labeling as “refugees” by the mainstream press. One interviewee sums up the fury felt by so many when he asks if the storm blew away his citizenship with his home.

As Lee faithfully reports such disgust and ire, he also interviews such a broad range of subjects that he does not allow the anger to consume the picture. He even interviews Blanco and New Orleans Mayor Ray Nagin, both of whom receive blame or absolution depending on whom is speaking about them. And as the film helps explain why crime might be a logical result of these trying times without endorsing it, so too does it give vital background to the conspiracy theory of the levees being intentionally blown without lending it serious credence. By interviewing people from different races, classes and relevance to the disaster, Lee accomplishes the difficult feat of capturing the unvarnished agony and loathing of those who faced the storm and its aftermath while still offering a mature, carefully researched analysis of that enraging response.

Among the dozens of interviewees, a few voices emerge as show-stealers. One man speaks in a flat, dead voice of watching helplessly as his mother died in front of him finally able to give her the “ceremony” of a blanket draped over her already rotting corpse. As the soul of the city, many musicians weigh in, but none stands out more than Lee’s own regular composer Terence Blanchard, a native of the city struck dumb by the sight of his obliterated neighborhood. Blanchard wrote the music for this film as well, and as he shuffles among the fetid streets blowing a mournful tune in his trumpet or taking his devastated mother back to her wrecked home, the audience is granted a horrible glimpse into his musical inspiration. The true star, however, is unquestionably one Phyllis Montana LeBlanc, a spitfire who offers honest, profane and hilarious thoughts on everything from FEMA’s absurd bureaucracy to Barbara Bush’s unbelievably crass, on-the-record statement that many poor residents actually benefited from being sent to other states to live in arenas. (“Give her my phone number!” she shouts at Lee, giving out her own so the former First Lady might dare to say that directly to her.) Phyllis is so quick with her rants that she could fit comfortably in a number of Lee’s fictive films, not merely this documentary.

Like any jazz eulogy, the anguish that runs through When the Levees Broke is ultimately overcome by a sense of perseverance and defiance of death and hardship. Though many interviewed cannot bear the thought of returning to a home that now seems literally and figuratively poisoned to them, just as many will not let Bush or God Himself sweep away their town. This mixture of hopelessness and righteous optimism fits well within Lee’s broader canon, most visible in the acceptance of responsibility at the end of 25th Hour or the thin but vital possibility of reconciliation and forgiveness in Do the Right Thing. When the Levees Broke’s ending note of conviction outshines them both, and it is almost amusing that this, Lee’s most giving and expansive film, should feel like the clearest auteur statement for a director so commonly labeled myopic and divisive.