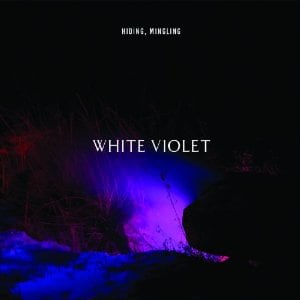 [xrr rating=2.0/5]It’s difficult not to hear almost every conceivable ilk of mediocre folksinger/songwriter all over Hiding, Mingling. Sometimes it’s even less than that. A cut-rate Conor Oberst most immediately springs to mind, and one suspects this isn’t purely by coincidence: album co-producer Andy LeMaster has both produced and performed with Oberst, while White Violet front man and fellow Athens, GA native Nate Nelson has in turn toured with LeMaster. It therefore comes as no surprise that the wounded quiver of a voice and ruminations on heartbreaking personal shit that have become Bright Eyes trademarks surface frequently on Hiding, Mingling.

What makes the album all the more frustrating is that, at times, Nelson and members Vaughan Lamb, Brad Elliott and Josh McCauley offer a blend of indie pop/folk that is absolutely brilliant. The album strongly opens with the somber “White Wash,” its mentions of lost friends, Southern towns covered in snow and “true love’s cost” made all the more poignant by the band’s hushed backing vocals. The slightly more up-tempo “Lays Around Lazy” and “Second Wind” reveal the band’s ability to craft clean, bright melodies and starkly contrast them with the songs’ gloomy subject matter; both songs, like much of the album, obsess over loneliness and mortality.

The rest of Hiding, Mingling is severely underwhelming and numbingly repetitive. As a singer, Nelson succumbs to self-indulgent affections that quickly become grating; his vocals excessively waiver and break for maximum tearjerker impact on songs like “4 AM,” “A Book” and “Station,” making these tracks – and the emotions behind them – sound contrived. The preciousness of Nelson’s writing is likewise tough to stomach. “Blame” is a weepy, saccharine ballad built on the age-old conceit that the impersonal world at large is at fault for the narrator’s self-misery (in this case, a cold moon is the culprit). In much the same way, the hack-poet-titled closing song “Ghost, Teacher, Girl, and I” starts with a clichéd reference to a bird singing in the key of D for a girl whose name the singer has forgotten. A coy mother of all dirty words is also dropped in the song to no effect.

So says White Violet’s website about Hiding, Mingling: “If you’ve never been resigned into the necessity of isolation, struggled to make sense, or tried like hell to hold onto hope against all reasonable odds, then you might not get it.” This of course suggests that anyone who isn’t moved by the album is essentially a heartless asshole, but it takes more than an “it’s not me, it’s you” argument to make an album resonate with an audience. Hiding, Mingling is, simply, a well-below average pop/folk record by a band that collectively comes across as comically fragile and delicate. If this album is any indication, a good rainstorm or small snowfall could be enough to send the band members, or at least their lyricist, into prolonged bouts of existential pondering.