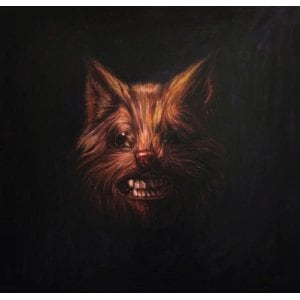 [xrr rating=4.25/5]When a mandatory part of a band’s biography is that audience members have supposedly puked due to the volume and intensity of its live performances, said band’s reputation has pretty much been established for life. The band that can boast of that achievement is Swans. The New York noise-rock ensemble has had a revolving lineup of musicians since it began in 1982, but its one constant has been Michael Gira: gifted lyricist and instrumentalist, deranged howler, demented ringmaster of a cacophonous circus and one of music’s truly underappreciated frontmen. Since reforming Swans in 1997, Gira has been nothing short of brilliant, with albums such as My Father Will Guide Me Up a Rope to the Sky stacking up favorably with the group’s best 1980s work.

The much shorter titled – and much longer running – The Seer is no exception. It stretches to nearly two hours and could prove an imposing listen for even the most hardened of Swans fans; the results, however, are astounding. The album is one of sustained tension occasionally mixed with bursts of release, whether it’s in the trancelike vocals on opening track “Lunacy,” the agitated breathing and contrasting later calmness of “Mother of the World,” or the title song, a 32-minute epic complete with droning vocals, crazy-loud guitars, and violent percussion. “93 Ave. B Blues” is five minutes of squall and squeals, its demonic chanting utterly unnerving and making it all too easy to imagine all sorts of bad shit going down. The album’s final two tracks – “A Piece of the Sky” and “The Apostate” – span more than 40 minutes and are likewise fraught with aggression and anxiety, with Gira croaking out lyrics about the sun fucking the dawn or, as the album closes, maniacally wailing as if trying to fight his way out of some nightmarish underworld.

Repetition is a key aspect of The Seer, most noticeably in Gira’s vocals. The singer’s voice has over time been worn down to a guttural groan, but it suits the music well. In this way Gira latches onto specific phrases that define each song’s narrative. This is clearly by design: Gira says the word “lunacy” so many times in the song of the same name that it eventually sounds like a mantra for the mentally tweaked, while both “The Seer Returns” and “Avatar” take on darkly possessive tones in repeated lines like, “My life pours out of my mouth/ My life pours into your mouth/ Your life pours into my mouth” and “Your life is in my hand.” By contrast, “Song for a Warrior” sticks out like a sore thumb (though, in Gira’s case, that digit is probably bloody as hell and about to be severed). Primarily sung by Karen O from Yeah Yeah Yeahs, the song is a slow, sad ballad framed by acoustic guitar, steel guitar and piano, and unarguably the album’s most vulnerable, and immediately accessible, moment.

Few albums can legitimately be described as sounding unlike anything else, but The Seer is that rare example. Contributions from Alan Sparhawk and Mimi Parker of Low, members of Akron/Family, Grasshopper of Mercury Rev and former Swans member Jarboe are seamlessly incorporated and neither detract from nor overshadow the band. Like most of Swans’ work, the record is not a comfortable listen, and not just because of its run time: its arrangements can be jarring one minute and soothing the next, and the listener never knows if Gira is going to passively speak his vocals or scream his head off. The Seer does not show the band at its most raucous and it will not find wide commercial success – which wasn’t ever in the equation anyway – but with its primal instincts and exposed nerve endings revealed at every turn, it makes for one helluva disconcerting, and perversely mesmerizing, listen.