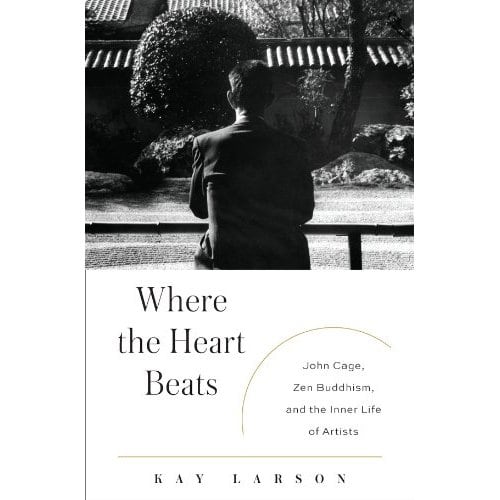 [xrr rating=4.0/5]For the uninitiated, the first listen of 4’33″, arguably the most well known of John Cage’s compositions, can be a baffling, maddening, calming and, at a minimum, thought provoking experience in a sort of “what the fuck?” kind of way. That’s a lot considering it’s simply a measured length of silence but Cage composed it to challenge notions of exactly what sound and silence are, a task that it certainly accomplishes. In Where the Heart Beats, Kay Larson’s excellent biography of Cage’s life, the journey he undertook to arrive at a musical philosophy that produced works such as 4’33’’ is explored in exhaustive detail, capturing his transition from a confused and frustrated young artist to a Zen philosopher of sound and composition.

The young Cage, raised in southern California in the 1920s, was a youth possessed of a burning curiosity and a great deal of inner turmoil that manifested itself in myriad ways. Coming to terms with his sexuality (Cage was bisexual with a heavy lean towards the male end of the spectrum) and his philosophy towards his art defined his life as the young composer traveled from California, through Europe and back to Seattle before finally settling in New York in the early forties. Larson does a remarkable job juxtaposing his inner confusion with his outward brilliance during those years when he was finding his feet. While in Seattle, Cage would meet the man who would become his life partner, Merce Cunningham. Unknown at the time, he would come to be a legend of his own as a renown choreographer. Initially collaborators and later lovers, Larson captures a stunning portrait of the many conflicts a gay couple in the forties and fifties faced. And while Cage and Cunningham were never exactly closeted, they were certainly never open in the way we’ve come to understand it now.

It was a conflict that Cage had an increasing difficult time with while he ingratiated himself into the New York City arts scene during the early fifties. It was an intensely formative and frustrating time for Cage, still trying to find his way as a composer baffled by the rules of composition. The list of artists, composers and benefactors that swirl around Cage’s life in this period is dizzying. Willem de Kooning, Jasper Johns, Peggy Guggenheim, Robert Rauschenberg and Jackson Pollack all make cameos, and all influenced his life in small and large ways. Nestled among the luminaries though sits a largely unknown man, D.T. Suzuki, the biggest influence on Cage during the New York years, and indeed in Cage’s life, second only to Cunningham. Cage’s attendance at Suzuki’s lectures on Zen Buddhism at Columbia University would utterly transform him, having already been exposed to small doses of eastern philosophy, they would make a lifetime convert. His conversion to Buddhism would square the circle for Cage in so many ways, helping him come to terms with his sexuality and relationship with Cunningham inwardly and outwardly, while helping him to define his unique approach to composition. All he wanted was for himself to be himself, and for sounds, however created, to be the essence of themselves. Buddhism gave Cage the tools to express that in way he couldn’t prior to his conversion. The proverbial artist banging his head against the wall in an effort to express his vision, it freed him from the self doubt that plagued him from the earliest points of his career and led him down the road to his most seminal works.

Larson does a wonderful job capturing the unadulterated wonderment that Cage had as he came alive following his Buddhist awakening. In perhaps the book’s most powerful moment, Cage visits the anechoic chamber at Harvard University, a room that is said to absorb 99.8% of the sound in the room. In a room meant to convey the absence of sound, Cage heard everything; the roaring blood rushing through his head, the neurons in his brain firing off. In that magical moment, the Zen thoughts that had come to color his worldview and his desire to express each sound as unique unto itself fused. It would inform all of his work going forward, with 4’33” being its most logical end. “In the quietest place on earth he hears himself…the ceaseless buzz of being. There is no such thing as silence”

Where the Heart Beats does have a few faults, chiefly that it doesn’t bring the reader anywhere near understanding the inner dynamic of Cage and Cunningham’s relationship. A surface level peak is all you get and while you know they are lovers and you understand that they collaborate, the inner machinations of their relationship are left untold. I don’t think Larson is entirely to blame for this either. By all accounts they were intensely guarded about the manner in which their relationship was presented (even Cage’s New York Times obituary scarcely address this, noting only that they lived together following Cage’s divorce from his first wife in the final sentence). If there were an account or interview that would have shed some light onto their partnership Larson would have surely found it, such is the extent of the research she obviously put into the book. Still, you’re left wanting to understand a little more about how two men who were obviously deeply in love, not to mention seminal figures in their respective fields, interacted.

If you were to run down the line from modern composers like Steve Reich to Philip Glass and connect it to the proto-jazz noise of Medeski, Martin and Wood or the ecstatic rock freak-outs of Akron/Family, you would find a little bit of Cage in all of them, most likely without knowing it as I suspect many are uninitiated to his works at this point. Understanding how to connect those dots to Cage and following him through his philosophical evolution is perhaps the greatest gift of Where the Heart Beats. At the very least Cage completes will revel in its detail and maybe a few more newbies will be turned onto to works like 4’33” and spend a great deal of time thinking, “What exactly does all this silence mean?”