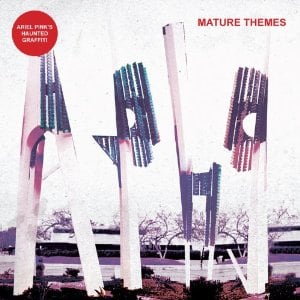 [xrr rating=2.0/5]For much of his career, Ariel Pink’s music has been walking a fine line between winking satire and tedious homage, an aesthetic choice that culminated in his very well-received 2010 record Before Today. It’s an album that boasted intentionally lo-fi production and a synth-heavy approach to mixing that deliberately linked his art to ‘80s pop music. It also established Pink as an artist who has little time for arguments of authenticity, instead reveling in giddy cultural appropriation. That ironic appropriation struck a chord with many critics and listeners, and now, in 2012, Pink has upped the ante to an outlandish degree. Mature Themes is the byproduct of that “ironic” indie culture, an insufferable, self-indulgent mess of a record. It’s Zappa without the wit, Bowie without the swagger and the Monkees minus the hooks.

On album opener “Kinski Assassin” Pink crafts a hook around a dreamy Casio line, his manipulated, robotic voice taking great satisfaction in the meaningless repetition of “Who sunk my battleship I sink my battleship.” Still, it’s the most endearing, or at least the most bearable, track on the record, as each song afterwards barrels down a hole of self-satisfaction that shows little regard for coherence or meaning. “Symphony of the Nymph”, which actually tells a vague tale of a nympho, is a hazy, sluggish piece of ‘80s dream pop, with weirdly dissonant backing vocals and the occasional sample of horses making, you know, horse noises. “Is This the Best Spot?” employs whirring 8-bit samples, fuzzed-out guitar and distorted horns while Pink rambles on about time travel and G-spots. There’s certainly a long history of strange, goofy music that’s elevated itself above simple novelty, but Pink fails to capture the essence of such music on this record – he lacks the moralistic qualities of Zappa or the whacked-out disillusion of Beefheart. Instead of using non-sequiturs and cheesy synth lines as satire, homage, or as a deconstruction of how the perception of musical trends change over time, Pink settles for sonic masturbation, refusing to acknowledge the presence of other people (listeners) in the room. At every turn there’s an eccentric sample or a strange turn of phrase, but there’s no lines connecting the dots. What’s left is a meaningless, indulgent smattering of ideas.

The pinnacle of this indulgence comes in the form of the intolerable “Schnitzel Boogie,” a fuzzy, pseudo-psych cut that constructs a coda (and a chorus) out of the endless repetition of the word “schnitzel.” In fact, the word is repeated 67 times over four-and-a-half minutes – yes, I counted. “Schnitzel Boogie” is not only the most grating of the 13 cuts and 50 minutes that make up Mature Themes, but it’s also indicative of the kind of album that this is as a whole; one that’s perfectly happy delivering cultural nostalgia with faux wit. As critics and listeners, we should always force ourselves to dig deeper into challenging, unfamiliar music and try to understand where the art lies. With Mature Themes, there’s nothing deeper, even though the production is a significant step up from Pink’s previous records – the smallest glimmer of hope throughout this record. Maybe I’ve missed the point and Pink is actually commenting on the vacuousness of modern culture; on the paradoxical lack of context and increasing fragmentation in a world where connectivity is everything and a vast well of information lies at many peoples’ fingertips. That would be grasping at straws though; there’s no evidence on this record to support such a hypothesis. Instead, Ariel Pink’s Haunted Graffiti has crafted vacuousness, with a smug, grating, lifeless record that misguidedly boasts “Aren’t we clever?” – and there’s nothing less compelling or artful than self-satisfied emptiness masked as meaningful, insightful commentary and charm.