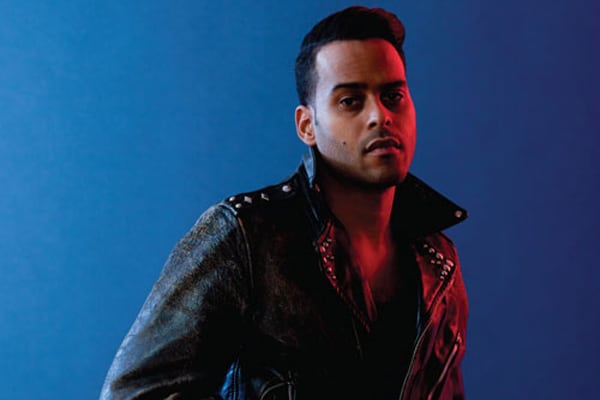 Twin Shadow’s George Lewis, Jr., isn’t one of those musicians who wears the ratty old T-shirt he’s had on all day during a concert. Just one look at the cover of his latest record, Confess, should dispel that notion. Lewis hunches forward in a crisp leather jacket, its collars turned up, his hair perfectly coiffed. Yeah, he looks great, but this devotion to fashion almost derailed a cracker of a show at Portland’s Doug Fir.

First, let me add that I have never seen the club crackle with this much energy in a long time. For many indie rock shows, male fans drag out girlfriends who sip at drinks and watch with faint interest. Yes, I am generalizing, but sometimes that is necessary to make a point. Here’s why: not only was the audience heavily composed of female fans, but many of them actually screamed as Lewis ripped through an 80 minute set full of songs about seduction and heartbreak, his big ol’ Rickenbacker guitar strung across his chest.

So back to fashion. Lewis’ hair was immaculate but the dude also wore a see-through mesh sweater and pulled it off. No one hooted or whistled in that way you would think ironic hipsters would do when the band took stage and tore into new songs “Golden Light” and “Five Seconds” (an instant challenge issued by Twin Shadow, playing a hot single early in the set). Instead, people danced along to the ‘80s-leaning music, as smoke billowed from the stage, bathing Lewis and his band in a heavenly halo of light and color.

Lewis played into the Portland stereotypes, making jokes about “Portlandia” and telling us that he heard crowds in our city are usually very “polite and stoned.” Beyond that short repartee and apologizing for a poor performance a few years ago, Lewis stuck to the music, playing songs from both Confess and his 2010 debut Forget such as “Tyrant Destroyed” and “Castles in the Snow.”

New track “Run My Heart” was a slow-burning highlight, its introduction more deliberately paced in its live form while ghostly noise filled the club before “Castles.” By the time the band reached the set-closing “’Forget,’” everyone around me was grooving along with the infectiousness of Lewis’ songs. An encore was inevitable, but welcome.

After some raucous applause, Lewis and friends returned and played “When We’re Dancing.” But here is where that gauzy sweater almost ruined the evening. Rather than let his body do the talking, Lewis called attention to the garment, openly wondering why no one commented on it. People whistled and shouted. Lewis smiled. Then for the final song, he played a stripped down version of the emotional “I Don’t Care.” During the pregnant pauses, crevices in the sound meant for reflection, people hooted and catcalled. Some asshole yelled, “I love your nipples!” One comment was enough to turn the audience completely around. Maybe he doesn’t care, but it would have been better if he danced us around the room without saying anything superfluous.