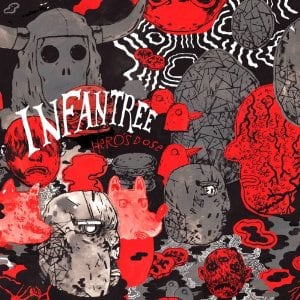 [xrr rating=1.75/5]California band Infantree recently scored an opening slot on businessman Neil Young’s fall concert tour. The old curmudgeon is also thanked in the credits on the band’s latest album, Hero’s Dose; “you” also get some love there, so it’s not that exclusive of a club I guess. It’s a high-profile opportunity for the foursome of Alex Vojandi, Donald Fisher, Matt Kronish and Jordan Avesar, assuming the landed gentry that attend Young’s shows show up on time and pay attention. And hopefully Infantree’s live show is far superior to what the group manages on Dose, because the album is a big, fat, ahem, dose of uninspired and repetitive indie rock.

On paper the album should succeed: the band members each expertly play an arsenal of instruments, three of them contribute vocals and the record is a fan-friendly and approachable 40 minutes in length. The execution of Hero’s Dose, however, proves otherwise. “What You Wanna Do” provides an inauspicious start to the album, its hard-edged percussion overwhelmed by pointlessly hazy vocals and an awkward groove. To prove it’s no fluke, the band essentially repeats this pattern time and again, adding minor wrinkles that don’t account for much. “Original Sin” relies on the group harmonies that are splattered all over the record, and “Skinny Bones Jones” and “Here Goes Nothing” are sung in a sugary-sweet voice that unintentionally sounds like a pastiche of Nashville Skyline-era Dylan or My Morning Jacket’s Jim James. Taken together, the latter two tracks seem interminably longer than their combined eight minutes.

The band returns to its annoying tendency to sing every third or fourth word in three-part harmony on the bucolic “Bag Of Tricks.” It’s almost as inevitable as death and taxes: this approach resurfaces on “Should” and “Lull,” where the band’s attempts at vocal intricacies instead come across as tedious. When the band does branch out, the results are only slightly more promising; the acoustic guitar work on the very-CSNY-like “Forgive Me First” is pretty nice, but even then the song amounts to little more than a soppy apology and a dainty foray into folk-rock. Add in Infantree’s penchant for reeling off trite aphorisms as if they’re pearls of wisdom – “Everybody wants to turn back time” is actually one of the album’s more profound lines – and the finished product is less than impressive.

Maybe the worst thing that an album can be is boring, but Hero’s Dose is that, and it’s got that going on in spades. Perhaps Infantree operates better in a live setting, but in studio the group portrays itself as a band that lives on borrowed sounds and recycled ideas that are then formulaically adhered to without fail or even the faintest hint of deviation. “Day after day seems the same,” according to “What You Wanna Do.” I know the feeling, brother.