Given their respective release dates, you’d think the two most prominent film adaptations of H.G. Wells’ 1898 apocalyptic masterpiece The War of the Worlds would reflect the justified paranoia that trailed in the wakes of both World War II and 9/11. After all, the 1938 Orson Welles-narrated radio broadcast infamously induced widespread panic in an era before nuclear warfare or hijacked jumbo jets. Given our species’ rise to the top of the food chain and humanity’s subsequent marauding history against its own, invasion paranoia may simply be an evolutionary adaptation. Prosperity carries with it the inherent risk of being snatched away by outside forces that look upon us with “envious eyes.” When you’re the king of the hill, you’ve got to watch your back. 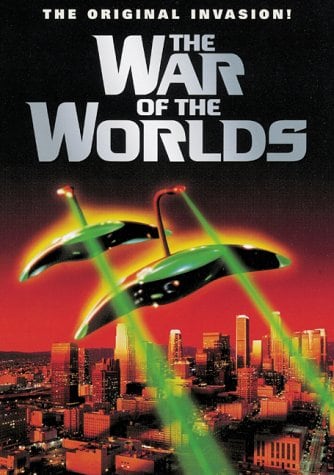 While both films contain whiffs of their era-specific paranoia, they also refreshingly sidestep blatant contemporary parallels in favor of focusing on the universal condition of Homo sapiens. Sure, Byron Haskin’s 1953 film makes a point to highlight that, much like the Ruskies, the Martian invaders originate from a Red motherland, and in Steven Spielberg’s interpretation (and remember, the guy loves aliens enough to force them into the Indiana Jones narrative) the insidiously embedded alien threat prompts the line “Is it terrorists?” Otherwise, both of these film adaptations stick to the more universal terror of helplessly witnessing a seemingly unstoppable invasion by malevolent forces from beyond the Moon.

The 1953 War focuses almost solely on futile military strategy (and it even opens with newsreel footage of the two World Wars) while tacking on an obligatory romantic angle and wooden acting in general. But the cutting edge (for its time) special effects of The War of the Worlds continues to hold up nearly 60 years later and is the only reason this is a landmark film. The prelude to the emergence of the alien vessels may be drawn out (even for a sub-90 minute picture) but that’s more a testament to the prerequisites of a ‘50s era audience than a storytelling deficit. All the one-dimensional characters are extraneous to the focus on the world’s greatest military getting their vaporized asses handed to them. The cheese ball dialogue (“Four minutes to bomb time,” etc.) and stiff postures of the actors show the film’s age far more than any of the effects. The slowly roving yet unrelenting alien crafts that realistically spray flame and spit green plasma, not to mention the spindly-armed and obliquely-viewed extraterrestrials themselves, remain unsettling to this day. The special effects are more deliciously vintage than outmoded.

On the other hand, Spielberg’s version seamlessly blends traditional special effects with impressive-for-2005 CGI, repackaging the story into a thrill-a-minute format that engages today’s action-oriented moviegoers. As Tim Robbins’ hackneyed survivalist character points out: it’s not a war, it’s an extermination. The downed airliner wreckage and the flaming train (an image that’s echoed in 2011’s Spielberg-produced creature feature Super 8) add poignancy to an otherwise formulaic approach to the (almost) end of days. The otherworldly flashes of light, blasts of unnerving sound and churning of uncanny storm clouds induce goose bumps as the extraterrestrials ride down on lightning bolts. But, unfortunately, the design of the alien walkers that rise from the earth (while fiercely loyal to the creative-for-the-time tripods of Wells’ original vision) prove unwieldy and unrealistic. Would an infinitely advanced alien species that had been planning an invasion for a million years really rely on such imposingly large yet easily toppled tripod vessels? 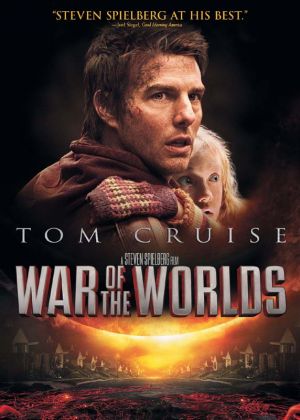 But Spielberg, in characteristic fashion, adds the schmaltzy heart that was lacking from the 1953 version. As I’ve mentioned, the characters in both films are superfluous to the flashy carnage, but both films differ greatly in their storytelling (and, for that matter, from the original Wells novel). The 1953 War takes a more planetary approach as we see images of landmarks such as the Eiffel Tower crumbling, while in the 2005 version we witness the devastation strictly through the eyes of Ray Ferrier (Tom Cruise). He’s a neglectful dad who rekindles a connection with his two children (Justin Chatwin and a saucer-eyed Dakota Fanning) by effectively preventing them all from getting zapped to dust by aliens. The word “Mars” is never specifically uttered in a picture filmed in the modern age when rovers have proven that the Red Planet’s actual landscape looks a lot more like the most boring parts of New Mexico than the homeland of a technologically advanced threat. The family drama is contrived, but it works enough to add an individual focus amidst worldwide chaos.

Unfortunately, the heavy-handed deus ex machina at the end of both films (bacteria put on Earth by God “in his wisdom” are the aliens’ undoing) comes far too abruptly. After brutally establishing that the invasion is unstoppable, the machines in both films simply crumple over without warning and a dying alien’s hand melodramatically stretches out the escape hatch. Spielberg toned down some of Haskin’s excesses (there’s no final exterior shot of a church or a choir singing the word “Amen”), but the message is the same: humanity is no match for aliens, but we can still rely on a power greater than ourselves to save the day. An unsatisfying climax any way you slice it, but the modern film is at least devoid of overt proselytizing. It does, however, highlight the inconsistencies of an alien race that has schemed for a million years to attack Earth and can control the weather yet somehow didn’t do its homework about our atmosphere. As the dust clears, it’s obvious that neither film can ultimately be saved from its flaws. The 1953 War is dated in all but its ominous tone and dazzling special effects, and the 2005 War is a frightening onslaught that simply has too many illogical premises to hold together. But by tapping into the deep-seated invasion paranoia within us all, both adaptations march Wells’ original doomsday vision relentlessly forward.