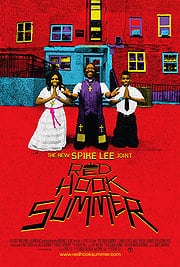 [xrr rating=3.25/5]Informal and pleasantly ambling, Red Hook Summer vividly captures the feel of a summer vacation like the one that sets its plot in motion. Bookended by two car rides, twin journeys of transition as thirteen-year-old Flik (Jules Brown) travels from and then back to the airport where he arrives from Atlanta to spend the summer with his grandfather Enoch (Clarke Peters) in the Red Hook area of Brooklyn, Spike Lee’s film remains tethered to this clearly demarcated structure as a way to allow Lee to depart and intuitively explore the film’s eponymous neighborhood. Along with Crooklyn and certain stretches of Clockers and He Got Game, Red Hook Summer captures Lee at his most freeform, drifting throughout Red Hook in a manner that ever so slightly gives viewers a hint of what Lee might produce if he attempted to do something similar to what Terrence Malick successfully achieved with The Tree of Life. Lee is always held back from fully distancing himself from conventional narrative, perhaps precisely because, while he is a brilliant, energetic and nimble stylist, his instinct is always towards the socially significant, which ties him to grand themes and well-defined narratives. Nonetheless, there is always something fascinating in watching him work, and Red Hook Summer, while flawed, is worthwhile on a number of levels.

The comparison with Malick is an interesting one because it highlights the relative freedom of a director like Malick, a filmmaker who essentially made a feature-length experimental film funded by studio money and lauded by even the most middlebrow critics, compared to the persistent sense one gets with Lee that he is never fully able to escape the need to speak profoundly about his recurring themes: race, class and American history. On the other hand, it doesn’t seem like a director such as Malick could have produced a film like Do the Right Thing, Lee’s towering and unquestionable masterpiece, so tied as it is, in the most powerful ways, to specific places and communities. Lee’s work perennially functions as a synthesis of the personal and the communal, each enriching the other while, in some cases, constricting the other as well.

One can see this tension play out most literally in Red Hook Summer, which initially begins as a story centered around Flik, a distinctly individualistic young teenager, before shifting gears quite suddenly by introducing an abrupt narrative twist. From then on, the film’s true subject emerges: by pitting the idiosyncratic young Flik against his preacher grandfather, Lee is interested in exploring tensions within the black community, simultaneously enriched and hindered by its own conservatism. Our own relationship to this conservatism modulates as the film goes on, and Lee initially elicits our sympathy towards it by having Enoch repeatedly attempt to make Flik embrace Christianity, which doubles as an attempt to reach Flik on a personal level as well. It is not just conversion Enoch is after, we feel, but also the redemption of an isolated family. The repetition of these attempts sets us up to expect that Flik might eventually participate in church and let his guard down as his grandfather wants. In many ways, we are also led to want this to happen. The eventual revelation about Enoch tarnishes his reputation and shakes us out of our lull, turning us sharply against him and the hypocrisy of his pious attitude. In doing this, Lee illustrates the intertwined nature of the political and the personal and the way black conservatism is so tied up in personal and social identity and historical memory.

It must be said, however, that this narrative twist comes across as somewhat awkward, even though it is rendered in powerfully dramatic fashion. The climactic scene in Red Hook Summer, in which Enoch’s past is exposed, arrives too long after the audience has become accustomed to thinking of this as Flik’s movie, especially as it explores his growing relationship with Chazz (Toni Lysaith). The reveal is too obvious, while at the same time coming out of nowhere. And yet, there is tremendous dramatic energy in this scene, and there’s a certain admirable courage in Lee’s willingness to tackle subjects that no other directors are interested in. Even more plainly laudable is a later scene between Enoch and Chazz’s mother, Sharon (Heather Simms), in which they discuss how things have changed in their lives and in their community. Simms’ performance here is particularly strong, a reminder that Lee is often capable of getting the best from his actors. It is because he always brings tremendous creativity to all his projects that, throughout his career, Lee has perhaps never made an outright failure, always imbuing even his most misguided works with interesting elements.

That Lee’s failures trouble his fans and supporters so much suggests how tied he is to a perceived obligation to speak for others. Red Hook Summer feels very much like an official pronouncement on the black church, and this is disappointing because everything of interest occurs when characters act against type, functioning as individuals rather than serving as analogs to qualities and behaviors within the black community. It is for this reason that, years from now, Red Hook Summer might be most remembered for the performances of Brown and Lysaith, two young and promising actors that bring an eccentric, at times off-kilter energy to the film. Neither has appeared in any films prior to Red Hook Summer, but it would be surprising if they don’t both go on to greater success after this. Their youthfulness and candor serve Lee well, suggesting that there is hope for their generation to move past the hypocrisy of someone like Enoch by simply being curious about a way of life different from the one their parents or grandparents might expect from them.