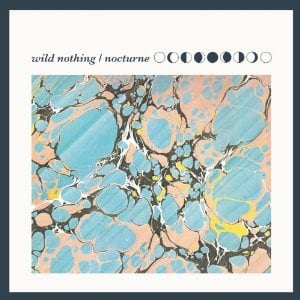 [xrr rating=4.0/5]On “The Swish,” a standout track from The Hold Steady’s debut record Almost Killed Me, frontman Craig Finn intones, “I survived the ‘80s one time already/ And I don’t recall it all that fondly.” Indeed, there’s plenty to hate about the decade that preached the gospel of snare drums reverberated to the point of unrecognizability, maudlin melodies, sugary synthetic strings and other sonic atrocities. Nevertheless, Jack Tatum, under the moniker Wild Nothing, came on the scene in the summer of 2010 with his brand of ‘80s-centric, chilled out dream-pop. On debut record Gemini, he combined the most beloved musical elements of the much-maligned decade with a modern bedroom recording aesthetic and a heavy dose of emotional realism. Lead single “Summer Holiday” showed that washed-out vocals and thin-toned guitars can add up to fun, vivacious indie pop. Now comes the second LP, the one that could prove a proverbial sophomore slump after a triumphant debut. Happily, Nocturne is an even richer, more accessible effort than Gemini. Its many pleasures are immediately apparent upon a first listen, yet they only grow deeper with time.

Tatum originates from Blacksburg, Virginia, but he’s been spending quite a bit of time in Brooklyn. Given that the record was a product of big-city sessions rather than bedroom recording techniques, it’s not surprising that Nocturne sounds brighter and fuller than Gemini. To his credit, Tatum mostly avoids falling into the trap of overindulgence that often plagues rising artists who find themselves with enhanced resources. The studio flourishes—the live strings on “Shadow,” the marimba on “The Blue Dress,” the tight, bright drum kit throughout—become integral parts of well-constructed songs, not merely expendable add-ons.

The record’s high fidelity comes to the fore on opener “Shadow,” a piece of addictive pop perfection that surpasses even the beloved “Summer Holiday” in catchiness and song craft. The unpretentious lead guitar riff, doubled by the aforementioned “real” strings, is melodically forceful enough to get lodged into the listener’s head for hours. The punchy kick drum, right out of Fleetwood Mac’s “Dreams,” is aligned precisely with the tunefully soulful bass. Over the top of this vibrant rhythm section, we get Tatum singing emotionally direct lyrics (“I could with you if you asked me to/ Though it wouldn’t get too far/ Two strangers in the dark”) in a hushed tone reminiscent of Billy Corgan at his most delightfully vulnerable (think “Tonight, Tonight”).

“Shadow” is such a singular achievement that it would seem doubtful whether the rest of Nocturne could soar over the high bar Tatum sets. From the noir-ish vibe of the title track, one that invokes a melancholy feeling similar to Chromatics, to the blissful, perpetual energy of “Only Heather,” to the punchy guitar-marimba lead of “The Blue Dress,” the record has no shortage of pop pleasures. The lyrics that accompany these attractive sounds strike a balance between personal specificity and universal pathos. Songs like “Only Heather” and “Rheya” mention girls by name, whereas “This Chain Won’t Break” instead speaks of a general scenario that could have any number of meanings for different listeners. Tatum sings, “{I don’t know just what I got myself into/ All I know is that I can’t let go}.”

More often than not, Wild Nothing wallows in the most treasured aspects of the ‘80s, the adolescent romanticism of the Cure, for example. Nocturne occasionally takes a misstep when Tatum allows his love of the decade to overpower his abilities to create timeless pop songs. “Through the Glass” sounds particularly anachronistic, like a Discovery Channel documentary soundtrack scored by Phil Collins. The faux-exotic acoustic guitars and polyrhythmic grooves are overdone, standing in contrast to the record’s disciplined overall sound. The long ambient section of “Paradise” likewise kills the momentum of an otherwise jovial, intoxicating tune. These imperfections are noticeable primarily because the rest of the album is so committed to pop excellence. Tatum hasn’t made a perfect record yet, but with Nocturne he has proven that the future for Wild Nothing is bright indeed.