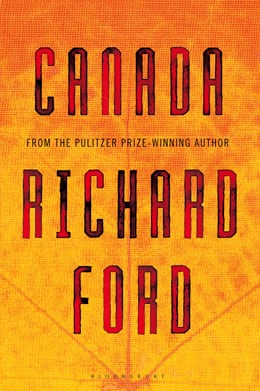 [xrr rating=4.5/5]Richard Ford’s first novel in six years reveals its two most significant events within its opening lines. “First, I’ll tell about the robbery our parents committed. Then about the murders, which happened later.” In those few short words and, without fail, in the many thereafter, Ford never relents from the heartbreakingly sincere narrative voice of Dell Parsons, a 15 year old boy who, along with his twin sister Berner, has his life torn asunder in 1960 by his enigmatic parents’ harebrained bank robbery scheme — a Hail Mary ploy to get out from under the specter of disgruntled beef poachers’ nominal threats. In fact, nearly every major twist and turn is foretold well in advance, a bewitching narrative strategy that would fail miserably if not enacted by the skilled hands of one of America’s literary masters.

Despite its title, half of Canada takes place in America, in the dusty “town, not a city” of Great Falls, Montana. We learn from Dell (who is actually narrating about his tumultuous adolescence from the wiser perspective of a retired school teacher in the present day) about how extraordinary events can rise up from ordinary circumstances and how one could peer through a picture window and watch a normal family eating dinner or putting together a jigsaw puzzle and not for a moment realize that the next day the parents would cross state lines to hold up a bank at gunpoint.

Dell’s mother is the daughter of immigrants and has resisted adapting to life as a military wife by discouraging her children from assimilating to any particular locale. In contrast, his dishonorably discharged father approaches every given situation expecting the best possible result. This leads Dell to cultivate an intensely introverted existence, in which he’s developed an interest in beekeeping and chess. He harbors an all-consuming desire to attend high school and to not “be left behind,” but his introversion also prevents him from acknowledging when he’s facing imminent peril.

In 1960, the social net allowed for vulnerable children to more easily slip through the cracks. After their parents’ arrest, Dell and Berner are left to their own devices. While his more impulsive twin sister opts to run away to San Francisco, Dell continues to adhere to the belief that if he follows his misguided parents’ direction then everything will end up all right. Afraid he’d be stuck in an oppressive orphanage, Dell’s mother arranges for a family friend to drive him across the Canadian border and into Saskatchewan to enter into what amounts to indentured servitude to a wildly eccentric, and ultimately violent, hotel owner. Dell is housed in an overflow shack in a nearby prairieland ghost town that is literally crumbling into dust. He bikes four miles into a slightly less barren town where he swamps hotel rooms and, eventually, begins assisting in guided goose hunting tours. Cast adrift, Dell heartrendingly spends his time trying to be noticed, to piece together some semblance of book knowledge and simply to reach out and make a connection. It’s here where he again is impacted by a senseless crime and where he ultimately begins to realize that we humans spend most of our lives in our own heads, and that losing your mind is probably never how you’d expect.

Despite its mundane title, its matter-of-fact narrator and the predestination of its major crimes, Canada is a furious page-turner with short chapters that urge the reader onward. In a recent interview with PBS, Ford related that much like the old adage that every boat is looking for an opportunity to sink, the typical reader seeks out the first chance to close the book. Aware of this, Ford has mastered the art of making us want just one more hit. It’s addicting.

With such an introspective narrator, Ford goes to great lengths to illustrate that tragedy and malevolence are, like anything else, intertwined with the ordinary. Dell spends the entire novel ruminating on the life he had and the family that he lost back in Great Falls, and also how coloring within the lines eventually led him to be the child of bank robbers and an accessory to murder in a cold, unfeeling wasteland. But Dell engages in little moralizing and instead accepts life as it comes. After all, life is rarely predictable, just as a book that gave away its key plot points on the first page turned out to be the best novel I’ve read all year.