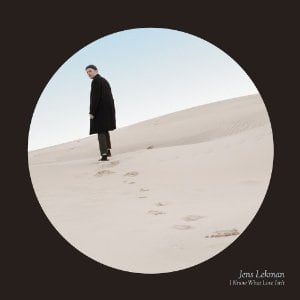 [xrr rating=3.75/5]“You don’t get over a broken heart/ You just learn to carry it gracefully.”

According to Jens Lekman, this is the takeaway line from his new album, I Know What Love Isn’t. It’s true that this is perhaps the pithiest summation of what Lekman describes as his the breakup album. For a more instructive window into the reality behind his third record, consider this passage from closing track “Every Little Hair Knows Your Name,” “I wrote some songs when we broke up/ But nothing came out so I stopped.” I Know What Love Isn’t is not really a breakup album, it’s a post-breakup album, written not with the bile of rejection but with maturity of distance.

Breakup albums usually consist of dark, brooding music filled with bitter, dark-night-of-the-soul moments and utter emotional desolation. Lekman doesn’t give us any of that on I Know What Love Isn’t, not because his heartbreak wasn’t as deep and his life wasn’t thrown into the same tumult as musicians who have brought you more histrionic records, but because it isn’t in his nature. From the information we can glean from interviews, Lekman was dating a woman while living in the States until their sudden breakup. The loss sent him reeling and spurred a sudden move to Melbourne, Australia as well as serious consideration of an ill-advised green card marriage to a friend. Rather than turn this potentially daytime TV-worthy series of events into musical melodrama, Lekman decided to wait and let his passions cool before hitting the studio. It’s clear when listening to these songs that they were written only after he’d already gained a good deal of perspective on the situation. As the line from “Every Little Hair Knows Your Name” indicates, he wasn’t writing with a freshly-broken heart, but rather with one that he knew to be still-wounded but also creakily intact.

Like the music of the Mountain Goats’ John Darnielle, Lekman’s songs are inevitably bound up in the geographic location where they occur. Copies of I Know What Love Isn’t might as well come with an Indiana Jones-style trace-along map where listeners can track his travels. Starting with his long-distance breakup leaving him stranded in the States (“Erica America”), we then see him flee to Australia where he faces extreme heat (“The World Moves On”), extreme loneliness (“I Want a Pair of Cowboy Boots”) and, eventually back home to Sweden, where he comes up with the harebrained marriage scheme (“I Know What Love Isn’t”). Just as in previous albums, the familiarity of Gothenburg helped ground the songs and provide a reassuring setting; the endless American summer and oppressive Australian heat and foreignness underline and reinforce Lekman’s inner vertigo and sense of dislocation.

Lekman has said that he feels that this is his first proper album (as opposed to “collections of recordings”) in that the songs were written more or less in a batch and are sequenced in a narrative arc. However, this still sounds very much like any other batch of Jens Lekman recordings with lush, playful instrumentation including various horns, strings, ukuleles, glockenspiels, pianos and some flutes and saxes popping up throughout. Sure there’s plenty of post-relationship obsession and sadness, but it’s all of the tempered, resigned variety. Nowhere is this point more clearly underlined than in the back-to-back combo of “The World Moves On” and “The End of the World Is Bigger Than Love”. The former shows Lekman stranded in Melbourne, desperately hooking up with a girl in hopes of some sort of solace but instead just finding himself alone, in a strange bed, watching the sun rise. The latter provides a litany of events that might put one man’s heartbreak into cosmic context, promising that “a broken heart is not the end of the world.” These aren’t the thoughts of a man reeling from a breakup, but rather one in the picking up the pieces stage. Lekman is able to quarantine his pain and transform it into a dull ache lurking at the base of the heart rather than an eviscerating despair of the early breakup that threatens to make normal functioning impossible.

On I Know What Love Isn’t, Lekman’s charmingly Swedish in his insistence on well thought-out, sober realizations about everyday life and long-term relationships, with just a dash of his old capital-R Romantic whimsy thrown in. The boy who remembered every kiss has had some scales removed from his eyes and now he’s being forced to mature and develop some emotional armor. For him the great catharsis is being able to tone down his emotions enough to allow him to rejoin the workaday slog of getting back to life. Fortunately for the listener, only Lekman can make resignation sound this good. Maybe maturity isn’t so bad after all.