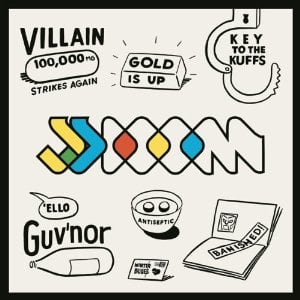 [xrr rating=2.75/5]Doom is back. No longer “MF” (or “Zev Love X” or any of the other pseudonyms he’s used over his prolific two decades on the mic), the artist whose real name is Daniel Dumile has returned for his first full length project since 2009’s Born Like This. This time, the MC/beatsmith is only handling rhyme duties as production is exclusively conducted by Jneiro Jarel. Together they form JJ Doom and bring us an album that calls to mind Doom’s greatest strengths as well as shortcomings. This is Keys to the Kuffs.

On one hand, I’m happy to report that the Doom whose spine-tingling adventures we initially subscribed to has indeed returned. Gone are the overly-cartoony and weirdly heavy-handed morality plays of DangerDoom, and the “stunt-Dooms” that the man sends in place of himself to perform live are nowhere to be found on the record. Instead, we mostly get the essence of what made Doom such a compelling character to begin with. His mask wasn’t always a gimmick to sell lunchboxes, but at one point was to “hide his scars.” It’s this bleak Operation Doomsday-era Fondle ‘Em supervillain who has returned, this time armed with the innovative focused flows and intricate wordplay that made his MadVillain work so acclaimed. For someone largely accused of plateauing and alleged laziness, key performances on Keys to the Kuffs should lay to rest all rumors that Doom doesn’t have it any more.

This resurgence fits with the album’s subtle Doom-retrospective theme. On “Borin’ Convo,” he revisits the “keep it on the humble” rhyme scheme from Operation Doomsday’s “?” and elongates it to an incredibly satisfying expansion. Elsewhere, Doom’s multi-syllable rhyme stacking is as sharp as ever. Album highlight “GMO” deals with chemically-enhanced “frankenfoods” as “breeds of a needless variety/ In the name of greed we get a seedless society.” Even his earlier more tragic side shines on “Retarded Fren.” The guest spots also do the Doom aura justice, especially Goodie Mob member and Jarel’s Willie Isz partner Khujo Goodie who shows up on “Still Kaps” as well as a relatively unexpected cameo elsewhere from Portishead’s Beth Gibbons.

But while everything should seem in place to make for an ideal Doom venture, what’s made Keys to the Kuffs so polarizing is Jarel’s production. One one had, Jarel strayed from his signature sound and seemed to go out of his way to capture what made the most beloved Doom records such classics. The samples sound ripped from the most sordid gutters of pop culture, and the disjointed rhythms allow Doom to showcase a lot of fresh new styles. Yet, as welcome as those elements are, the Keys to the Kuffs’ drums resemble weak clicks and the bass lines are soft to the point of non-existence. It’s frustrating how many moments on JJ Doom should absolutely knock, but are marred by a weak foundation. It’s often not enough to support Doom’s vocals, making them sound overbearing. It’s the same problem as the drum-less orchestral tracks on Nas’ Life is Good. I’m all for thinking outside the box and experimenting with what one can do with rap production, but at some point you have to maintain the foundations of what makes a dope beat resonate. As great as it is to hear Doom rejuvenated as well as a producer going to such lengths to capture a sound, it would be much easier to recommend this album had it not been so marred by the mix.