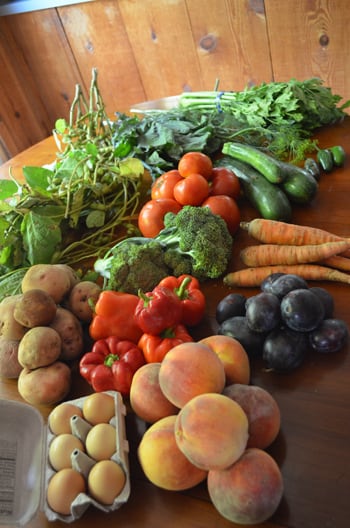 Without question, the number one response we get when we tell our friends about the CSA program we are part of is “Sounds great, but what do you do with all that stuff.” Actually, I think it’s the only response we’ve gotten to date. With good reason, as the amount of vegetables and, in our case, eggs and fruit we get from a weekly share is daunting. Couple that with the fact that you’re at the mercy of whatever the farm has ready that week and it’s easy to become overwhelmed. Subscribing to a CSA can be as much about a mindset as it is about supporting local agriculture. The second thing most people say to us is “ugghh, sounds great but I don’t know if I could do that.” It’s a valid thought, but my reply to it is that there is nothing more liberating than to give yourself over to the wisdom of our local farmer by improvising meals for the week thanks to their hard work.

Besides that admittedly esoteric reason stands other more practical ones, like the fact that we could all use more vegetables in our diets, it’s important to support our local businesses and produce that’s picked at the height of its season tastes better than the stuff that’s sat in a refrigerated truck for a week before making its way to the supermarket shelves. You’ll also learn things about the nature of vegetables that you never would from buying them in supermarkets. Edamame is delivered fresh still attached to their long stalks; who knew what they looked like outside of their frozen bags? Potatoes that, when raw, slice as if filled with butter rather than the stiff starch of their supermarket companions. Cooking with local produce can lead to remarkable new discoveries with produce that you’ve cooked with countless times before.

And still, just because something is civic-minded and potentially delicious to do doesn’t always mean it’s easy. Here was our share for last week, courtesy of the Garden of Eve organic farm in Aquebougue, NY: a half dozen eggs, 11 plums, 7 peaches, 1 bunch of carrots, 5 bell peppers, 2 heads of broccoli, 6 beefsteak tomatoes, 3 zucchini, 1 bunch of celery, a stalk of edamame, 10 red potatoes, a bunch of swiss chard and some basil. Good variety, eh? Some of those items were easy to deal with. The plums, well, we’re going to eat those. Simple as that, although grilling them until they are caramelized and topping with vanilla ice cream makes for an excellent desert (that still might happen, we have a few left). The eggs fall into the easy category too, as they’ve already been scrambled for this past Sunday’s breakfast.

The edamame are admittedly a curveball, but still easy to cope with. Simply steamed and salted, they could have made for an excellent snack, but where would the fun be in that? Instead I took the ingredient you usually only see in Japanese restaurants on an Italian route, mixing the steamed and shelled edamame with mint, shaved pecorino and lemon juice. That’s where the easy ends with this weeks share.

The two biggest obstacles I run into with cooking based on a CSA model are: knowing what to cook first based on what keeps the longest and dealing with the quantity you get from each share. I’ve learned to use whatever leafy greens you get first since those seem to keep the shortest amount of time, and to leave the root vegetables for later in the week. This week, we used the Swiss chard in potato hash, the wilting leaves providing a nice contrast to the crispy potatoes. Broccoli is at least part leafy green and also seems to spoil fairly quickly, so that was also cooked early on in the week, sautéed with tomatoes, onions and garlic for a simple summer pasta sauce.

Another thing I’ve learned is when in doubt, pickle. We’ve been running at a peach surplus the past few weeks, which the addition of this week’s seven did nothing to help. It’s a good problem to have, but, faced with a whole mess of spoiling peaches, some preservation techniques were called for. Pickling is a great way to prolong the life of produce, just take care to follow proper canning practices. We also had some beets and carrots left over from last week’s share, so I made a big batch of pickling liquid and canned the peaches and vegetables separately. Pickles are endlessly versatile: try a pickled peach and cheddar sandwich or mix some pickled beets into an arugula salad and use some of the pickling liquid instead of a vinaigrette.

The final rule I try to follow is that roasted vegetables plus whole grains equal a healthy lunch. I try to take some of the leftover produce I know we wont get to in a given week and repurpose it into lunch to take with me to work. This week it was grilled tomatoes, carrots, and bell peppers mixed with farro.

That covers most of the share for this past week. We still have some leftover potatoes to get to. Oh, and the celery was quickly snapped up by my wife for her lunches. Included below are some selected recipes that grew out of this weeks haul.

Combine the water, vinegar, sugar and salt in a large saucepan, bring to a boil and then turn off the heat. While this is happening, place the fennel and mustard seeds into a large canning jar and then pack the jar with the peach slices (divide appropriately if you are using smaller jars). Ladle the pickling liquid to the top of the jar, leaving a 1/4 inch or so of space at the top. Process in boiling water for 10 minutes. The peaches will be good to go in four days.

Steam the edamame for 20-25 minutes, until they are tender and squeezed easily from their shells. Divide the shelled edamame among four plates and divide the cheese, lemon juice and mint equally among the plates. Season to taste with salt and pepper, drizzle with olive oil and serve immediately.