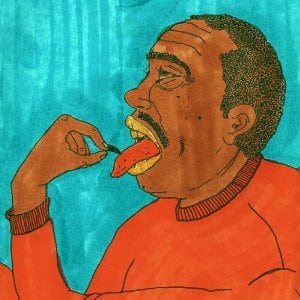 [xrr rating=3.0/5]Sometimes a record is just weird; blissfully, defiantly, extraordinarily, lusciously, thrillingly, grandly, piercingly, stunningly, tartly, stridently weird. The record celebrates weirdness, practically courting it. It figures out how close it can get to conventional songcraft while still hinting at swirling, goofy undercurrents before bounding back to the wild, warped safety of its warmly cultivated bizarreness. That doesn’t necessarily mean the record is trying to pummel viewers with an aggressive challenge to embrace its jagged edges, although that certainly comes up a lot in this scenario. It can still be charming and approachable and even sort of sweet. And so we come to the sophomore full-length release by Fergus & Geronimo, Funky Was the State of Affairs.

The best ever band to willingly try on every style of music (except maybe death metal) out of Denton, Texas, Fergus & Geronimo is the brainchild of Jason Kelly and Andrew Savage. The duo started recording together in 2008, eventually releasing a few singles before coming with their proper debut, Unlearn, in 2011. The album was greeted with praise that was effusive, even if occasionally somewhat perplexed. It seemed less a case of the critical community have a collective fear of stepping up and yelling about how the emperor has no chords and more a happy, if distant, respect for the intertwined artistry and audacity they brought to their efforts. Entertaining as they were, no one could accuse them of fishing for a hit.

Funky Was the State of Affairs drives in the same lane, even if it swerves a little more. It seems to be a quasi-concept album, theoretically about conspiratorial space aliens and romance. Maybe? Besides the mostly brisk songs that pop around stylistically, from the post-punk of “Roman Tick” to the loopy garage funk of “Spies” to the helium-voiced sideways jazz of “Earthling Women,” there are all sorts of interstitial bits. Sometimes they’re skits that carry some of the ragged disregard of the jokey flotsam that fills space on many hip-hop record (to be fair, I liked the gag about the guy who can’t use his phone anymore because aliens broke into his house and replaced the digits on the dial with Roman numerals, and he never learned those), and sometimes they’re mostly identifiable by the pile-up on almost unlistenable noise and distortion (“The Uncanny Valley” is something like having Lou Reed’s Metal Machine Music reduced to its syrupy essence).

As I listened, I kept trying to find comparisons, noting how the pronounced (and very fake) English accent on “No Parties” sounds a little like Ian Dury or how I could imagine “Off the Map” cropping up on an early Pere Ubu album, but I realized I was just grasping at other acts that are, in way or another, utterly unique (I do still think that several different songs have unmistakable echoes of Devo when pop radio stopped paying attention, and they reacting by incorporating ever more experimental sounds). Good or bad, or even both simultaneously, Funky Was the State of Affairs is entirely its own mad concoction. And it’s abundantly clear that it could have only come from Fergus & Geronimo.