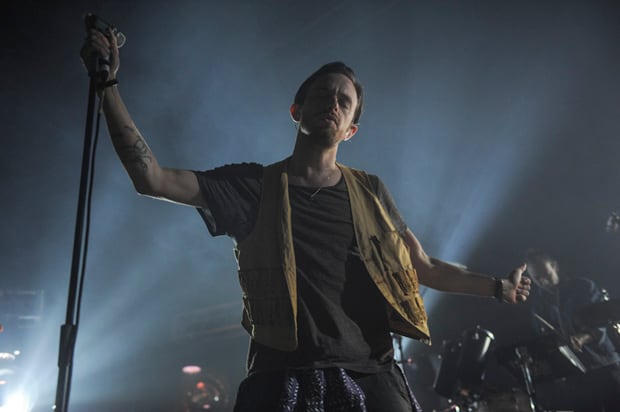 All grown up and with three proper LPs now tucked under their collective belt, Brooklyn’s psychedelic poppers Yeasayer stopped in to Portland’s Crystal Ballroom for one of the final stops of their tour in support of latest record Fragrant World. While the album that brought them out that evening is more a hit or miss affair, tracks like “Reagan’s Skeleton” and “Henrietta” standing out more prominently than others, the band leaned appropriately in favor of samples pulled from all corners of their career. The resultant set twisted through the highly varied stylistic backflips commonplace for the group, yet remained pleasantly cohesive in spite of it.

Even with a mostly predictable setlist, though, the energized foursome – Ira Wolf Tuton on bass, Jason Trammell behind the drum kit, vocal duties split evenly between guitarist Anand Wilder and Chris Keating on keys – semi-frequently surprised. Fragrant World’s “Blue Paper” was lent unexpected punch and breadth by atmospheric, resonating percussion, echo and tremolo. The aforementioned “Henrietta,” upon the first hopscotching bass strokes (with Wilder providing the song’s signature riff high up on his fret board), set whole swaths of the floor to dancing as soon as the audience had worked out what song it was. Offered plaintive and raw, bridge deconstructed and high points brought to the fore in energetic pushes, the track felt cracked open, a scuzzy rhythm left to leak out, even while its refrain became a rallying call for the crowd.

Among the poppier efforts, the results were roughly the same. Shimmering “Longevity” played out to an effect expected in its full electronic embrace, funky synth line and seedy, sweaty rhythm lazily teased out. “O.N.E.” was lent a highly sliced-up, 8-bit foundation, instrumentation tinkling behind Wilder’s soulful vocals as barrages of Tronish polygons and geometric lines were lit up on the stage’s backdrop. Keating on vocals, “2080” saw Wilder, with pseudo-African coloratura, providing musical stairs for the tune to tumble down, the song’s excitable thread severed before every chorus but righted again by swells of harmonies. And, for all its sounding sort of like a cast-off Feels-era Animal Collective tune (but with less screaming), “Madder Red” was the most well received cut up to that point in the evening.

But the real heavy hitters were reserved for the set’s tail, disco rhythms and cymbal splashes of the newer “Demon Road” and intensely shifting sands of “Wait for the Summer” leading a late return to dancier material. The blazing “Reagan’s Skeleton” prime among them, live standard “Ambling Alp” closed the official set with the group’s biggest energy of the night, the elements of both falling neatly into place before the encore. Featuring “Fingers Never Bleed,” “Devil and the Deed” (rendered in a crystalline, music box quality) and the only proper shredding of the evening on Wilder’s part, the encore’s highlight was an expansive, nearly breathing “Tightrope.” In relaxed riffing, resonant chords, squeezebox siren and an ‘80s Caribbean feel, it kicked off the show’s slow burning outro.

In decent form that night, the band provided a thorough portrait of the complex admixture of rhythmic backbone, vocal highs and instrumental lows that comprise the heart and pulse of most Yeasayer cuts. Although in concert the same concerns familiar to listeners sprung up – an enthusiasm for mashing up styles that can sometimes produce muddled offspring, a tonal looseness that lends some tracks a shambling character, as if the flesh of a song might suddenly slide off its bones – the result was an enjoyable, if at times uneven, performance. But the night’s danceworthiness? Simply top shelf.