March 04, 2021
Home Music Dignan Porch: Nothing Bad Will Ever Happen 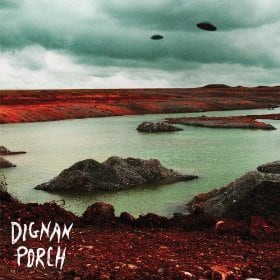 [xrr rating=2.0/5]Nothing Bad Will Ever Happen, the second LP from the UK’s Dignan Porch, might just be the final gasp for air from lo-fi chillwave before it dies. You could argue that the vacant, utterly soulless wanderings of Washed Out’s Within and Without makes a better case for the mercy killing of chillwave, but the empty aesthetic choices and frustrating amount of fuzz and tape hiss on this record have brought the genre to new lows. With their sophomore record, Dignan Porch aspire to the heights of Real Estate’s wonderful record Days, yet fail to comprehend that in order for lo-fi leaning productions to truly work, there must be a confident songwriting structure at the album’s core.

Nothing Bad sputters to life with opening track “Picking Up Dust”, a hazy concoction of sunny guitar leads and simplistic, driving percussion. It’s immediately clear that Dignan Porch are drawing from a handful of ‘60s psych acts and ‘90s indie rock, yet playing it safe by grinding down all the sharp spikes into tidy, safe, round edges. “Darkness” builds off of a sloppy lead guitar line while dissonant electric power chords swirl into a haze of reverb and messy overtones. Meanwhile, “Pink Oil” slowly layers multiple lead riffs overtop of soft synths, but the build up never leads to any meaningful catharsis. Instead, the track pulls out a B-grade slapdash guitar solo, shooting for Pavement but coming up well short. “Never” continues in the same vain, boasting an insufferable appropriation of slacker rock, wandering endlessly, a lazy bass line clashing against an unremarkable lead guitar riff with garbled vocals placed unusually far back in the mix.

While the production on Nothing Bad is admittedly more sophisticated and shiny than that of the band’s debut LP – when Dignan Porch was merely the one-man bedroom production of main man Joe Walsh – the lack of hooks or memorable melodies are a disservice to the upgrade in sound quality. “Cancelled TV Shows” is one of the few tracks to show any sense of urgency, especially when compared to its slowed-down counterpart, “TV Shows.” Even then, the overdriven power chord progression, which has the potential to be a manic piece of blues-y songwriting, feels languid and cliché in the hands of Dignan Porch. “Sleep with the Dead” is as lifeless as its titular characters, the arrangement failing to decide on whether it wants to ramp up into a garage rock jam or mellow itself out into haze of reverb-laden tones.

Nothing Bad Will Ever Happen – and Dignan Porch for that matter – suffers from a crippling identity crisis. There are clear influences throughout this record – Yo La Tengo being one of the more obvious ones – but there’s little here to suggest that Dignan Porch’s creative visions are more than a collection of misguided, hackneyed appropriations. There’s nary a memorable hook to be found, and Walsh’s exploration of well-trodden lyrical themes – girls, summer and hopelessness, obviously – would feel all the more contrived if the vocals weren’t often lost in the mix. Nothing Bad is content to just lay there, comatose, bloodless and toothless. It’s an appropriate metaphor for the lifeless carcass of chillwave it represents.