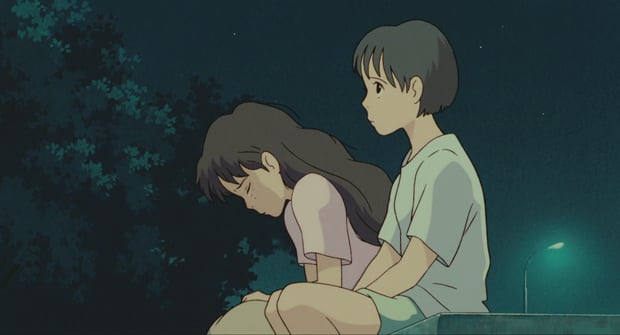 In 1995, Studio Ghibli released Whisper of the Heart, the first and only feature film directed by animator Yoshifumi Kondō. Three years later, Kondō passed away suddenly at the relatively young age of 47, depriving the world of a promising, hardworking artist—Kondō had a hand in a number of major Ghibli productions before directing a feature. Studio Ghibli is today most associated with its co-founder Hayao Miyazaki, perhaps the greatest director of animated films of his time. Miyazaki’s presence is felt throughout Studio Ghibli’s work, and in fact, he drew storyboards and wrote the screenplay for Whisper of the Heart, adapted from the manga of the same name by Aoi Hiiragi. Despite this, the film seems clearly the work of a different artist, markedly different from Miyazaki’s work, and it is this fact that amplifies the tragedy of Kondō’s early death. All we can do is speculate from the work we do have, but even within Ghibli’s tremendous body of work, Whisper of the Heart is a special film, one that perfectly captures the emotional life of a young, introverted girl. Experiencing the film, it’s hard not to believe that Kondō would have gone on to have a long, great career as a director.

One of the reasons Whisper of the Heart feels so much like Kondō’s work, despite Miyazaki’s significant involvement in the film, is that, unlike the work of Miyazaki, there is no supernatural element in the film whatsoever. This is a firmly realistic film, and the closest we come to Miyazaki’s trademark supernaturalism is in a sequence clearly demarcated as being part of the protagonist’s imagination. What Kondō does instead is zoom in on one element of Studio Ghibli’s work and amplify it, pushing everything else to the side in order to eliminate any distractions: Miyazaki’s work has always been attentive to the state of mind of young people, especially young girls—his earlier films My Neighbor Totoro and Kiki’s Delivery Service being masterful examples of that—but very often, our attention is pulled in so many other directions within magical, otherworldly settings. In retrospect, it is the magnificent, unforgettable Totoro that we remember most about My Neighbor Totoro, not the two sisters. And in Kiki’s Delivery Service, a film which shares many of the concerns of Whisper of the Heart, what we remember about Kiki is her ability to fly through the air.

This is not to criticize Miyazaki’s films but to suggest that his ambition and distinct brand of genius precluded him from paring his stories down to the spare beauty of Whisper of the Heart. The difference between the two is readily apparent when we examine how they construct their worlds. In Miyazaki’s films, each image seems positively alive, tempting us to linger over them like paintings. We may notice the meticulously detailed movement of clothing or the independence with which the natural world moves apart from the concerns of humans. By contrast, Kondō’s world is one of crystalline stillness, each movement resounding with sharp clarity. Kondō brings his world to life aurally rather than merely visually: throughout Whisper of the Heart, ambient and environmental sounds rise to the foreground and vividly conjure up distinct locations. Outside, we hear insects and birds or the distant but soft noise of human voices and traffic. In one scene, during a rainstorm, Kondō delights in using the rain’s patter as the moody backdrop for a particularly emotional conversation between the protagonist Shizuku (Yōko Honna) and her love interest Seiji (Issei Takahashi). Kondō also amplifies sounds like the creaking of doors or chairs, making each resound clearly and precisely, and when Seiji accompanies Shizuku home one night, the soundtrack’s twinkling music competes with the gently rhythmic sound of the rotating wheels of Seiji’s bicycle as he walks it alongside Shizuku. 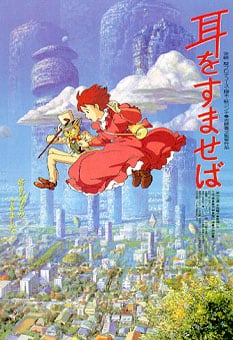 These sounds echo throughout our attention, like triggers of suddenly resurgent memories. In this way, Kondō generates a tender, alert mindfulness in the viewer, putting us in a meditative state and making us more receptive to his story. Whisper of the Heart is grounded in these kinds of details in order to place us intimately inside the world of its protagonist Shizuku, uniting us with her consciousness such that our enjoyment of the film is largely dependent upon our receptivity to the contours of her experience. Whisper of the Heart is an unabashed melodrama, raising up the emotional turmoil of a young girl to dizzying heights. For this reason, some may initially resist it, but it’s this quality that makes it so exceptional: by taking the inner workings of the melodrama genre seriously, Whisper of the Heart ennobles the experience of its heroine as she searches for a sense of identity and a place in her world.

Early on, the film involves itself in the teenage drama of liking boys (who may not return the affection), but it transforms into something more. In one of the first scenes, Shizuku has a conversation with her best friend Yuko (Maiko Kayama), who pines for one boy while being pursued by another. Meanwhile, Shizuku has noticed that all the books she has checked out of the library had previously been checked out by someone named Seiji Amasawa, about whom she begins to fantasize. She also becomes annoyed when an unknown boy teases her after finding some lyrics she had been writing (a re-write of John Denver’s “Take Me Home, Country Roads”). The adjacency of these early plots sets Whisper of the Heart up as a relatively conventional tale of young girls navigating their relationships to boys, but Kondō uses this convention to lure us in and then drive another story forward. Shizuku finally meets Seiji, led to his grandfather’s antique shop by a strange cat (a slight nod to Miyazaki’s tendency to give animals enormous personality), only to discover that he is the same annoying boy from earlier. Before realizing this, however, they fall in love while performing the aforementioned Denver song, accompanied by Seiji’s grandfather and his friends in a beautiful sequence that retains all of Miyazaki’s sense of magic in a scene that is completely naturalistic.

Although Kondō’s film is driven by Shizuku’s romance with Seiji, it is not primarily a film about a woman defined by the man she loves. After they come to know each other better, Shizuku feels ashamed by the fact that Seiji, who aspires to make violins for a living, seemingly has his life and identity well thought-out. From here, Whisper of the Heart transforms into a film about a young girl discovering herself, using her love for Seiji as her motivation for asserting her own independence, hoping to one day become every bit his equal in her own field, which she hopes to discover. Her admiration for Seiji spurs her on to attempt to write a story to prove herself worthy of Seiji’s love, encouraged by her own lyric-writing and love of reading. Seiji leaves for a few months on an apprenticeship in Italy, and in his absence, Shizuku tirelessly works to craft her story. In a sense, his absence here magnifies that Shizuku’s motivation is self-discovery, not an obsequious desire for love and acceptance. It’s even possible to view Whisper of the Heart as a Jungian journey inwards, Seiji functioning as much as a projection of Shizuku’s inner psyche as he does as a real person.

Despite the catharsis offered by Whisper of the Heart, capturing a young woman’s blossoming into maturity and her new found love, Kondō’s film is a rather melancholic one, almost depressive at times. When Shizuku shows Seiji’s grandfather her story for the first time, he responds positively, but it doesn’t feel like enough. One senses that neither the grandfather’s admiration nor Seiji’s own affection for Shizuku will calm her own sense of inferiority and need for love. This is because the person Shizuku ultimately seeks approval from is herself: Shizuku’s desire to make Seiji proud gives her the motivation she needs, finding insufficient encouragement within herself. Seiji’s grandfather tells her that she needs to find the special part inside herself and polish it until it shines like a jewel. This is a positive message—and the grandfather offers much-needed support and encouragement—but in raising this as Shizuku’s goal, Whisper of the Heart draws attention to her lingering self-doubts, amplified when contrasted with her admiration for the seemingly confident Seiji. Although Kondō’s film is very specifically a tale of a young woman, lacking the encouragement and supports that many young men receive, it is also the story of any individual’s journey to self-respect, dredging up the pain of self-doubt along the way. The stillness of Kondō’s film invites us to listen deeply within ourselves, and as the film proceeds, Kondō strips away everything unnecessary, even pruning the potentially maudlin quality of the story, until all that’s left is searing, intimate tenderness and the rawest kind of honesty.