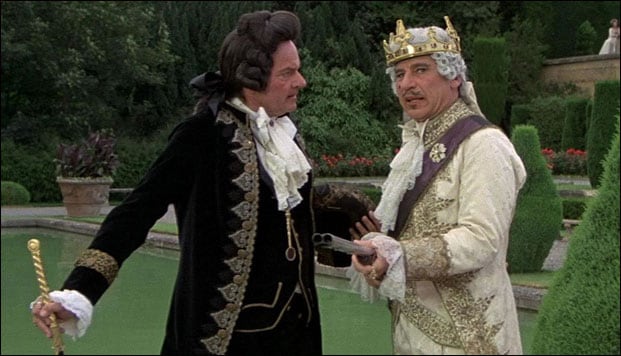 We’ve all been to concerts where it doesn’t seems as if the band could play a wrong note or read books where you just know, unequivocally, that the author labored over every sentence. And we’ve all seen movies where the director doesn’t waste a scene, where no dialogue is merely filler and where we’ve watched in awe as that note-perfect piece of filmmaking unfolds before our eyes. In 1974, Mel Brooks released two such movies, Blazing Saddles and Young Frankenstein. To argue anything other than ‘74 as the apex of Brooks’ long and storied career would be foolish as both movies from that year are comedic masterpieces of the highest order.

The thing is, though, seven years later Brooks wrote, produced and directed History of the World, Part 1, which is every bit the equal of the latter two, even though it never comes up in any discussion of Brooks’ best work. Can’t there be room in the director’s pantheon for three movies rather than two? In many ways, it gets lost in the shuffle between his early masterpieces and the films he created later in the ‘80s and early ‘90s that served as a gateway for so many people to discover his body of work (eight out of 10 people I informally polled listed Spaceballs as their first encounter with Brooks).

History of the World, Part 1 is a comedy that starts with masturbating gorillas in a spoof of 2001: A Space Odyssey and ends with a medley of Jews hurtling through space and Hitler figure skating. I’ll stop short of saying he was restrained by operating within the paradigm of a western for Blazing Saddles, and its not as if parodying Frankenstein doesn’t come with certain structural baggage. That being said, the fact that History of the World freed him from being tied down to a single unifying concept unleashes his comic maximalism in all its brilliant glory. In that vein, Brooks covers a lot of ground during the movie, from stoner humor (Roman Red!) to grand musical numbers, all with the requisite skewering of religion, class and sexuality interspersed throughout. In a career littered with highlights, this is his most original work.

Brooks’ strength as a master of parody is well documented, but his secret weapon was wrangling superlative performances from his supporting casts. It’s what makes History of the World, Part 1 a sum of parts that’s greater than its whole. Virtually every single appearance Dom DeLuise committed to celluloid outside of this movie consists of him “a cha cha cha”-ing his way through his lines, always a caricature of himself and never a character. In History of the World, he is transformed into a slovenly hot mess of an emperor, Nero to be exact. He steals the movie with every grape he spits in exasperation, every piece of gold or live chicken that he pulls out of his butt and with every half blurted/half spit line that comes out of his mouth (gold bath!). It’s a performance that’s indicative of the kind of work Brooks got out of the entire cast. Take Shecky Greene’s Roman warrior Marcus Vindictus, rolling his R’s and swooning after Empress Nympho (Madeline Kahn). Greene was essentially a Vegas lounge act veteran, but nevertheless gives a nuanced and funny turn as the inept commander. Or how about Bea Arthur’s uncredited cameo as an unemployment office clerk in Rome? Her deadpan anger as she interrogates Comicus (Brooks) is the classic distillation of the role of a stand up comedian in society. 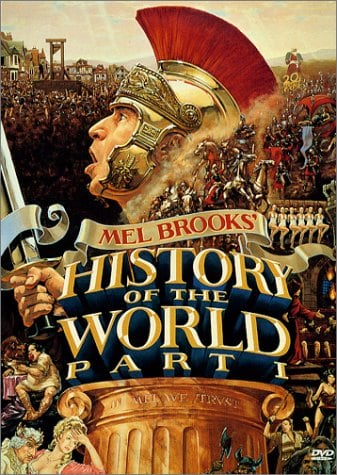 “I’m a stand up philosopher….”

“Ahhh, a bullshit artist! Have you bullshitted today?”

Keep in mind that you could make this argument using virtually every member of the cast, from the random Greek actor who played the powder faced, androgynous Bearnaise in the French Revolution scene (Andreas Voutsinas, but trust me, he’s random) to the Chief Monk of the Spanish Inquisition scene (Phil Leeds), who shifts from solemn incantations to a Borscht Belt inflection at the drop of the hat. “Let’s face it, you can’t Torquemada anything.” The point is: this was a much larger ensemble that any Brooks film before or after, and it’s to his credit that each and every actor playing in it gave it their all.

History of the World, Part 1 has also aged considerably better than most of Brooks later movies. I’m one of the aforementioned moviegoers that came to his work through Spaceballs, and while it’s still a funny movie, it feels very much to me to be stuck in an ‘80s time warp, as does Robin Hood: Men in Tights from the early ‘90s. History of the World has some dated sight gags and references, but there’s no Dave Chappelle rap scene analogue in it. That is probably its greatest accomplishment: a movie that features the likes Sid Caesar, Shecky Greene, Cloris Leachman and even Henny Youngman (small cameo) that doesn’t feel dated. Maybe it’s the rich vs. poor theme that underlies the every vignette that makes it resonate so well today. With the Roman Senate that votes to “Fuck the Poor” instead of building affordable housing, or King Louis XVI (Brooks again) skeet shooting with French commoners for targets, there are some themes that are as valid today as they were in 1981. “It’s good to be the King”

And yet, in a movie that delivers one searingly funny performance after another, it sits at a 62% approval rating on Rotten Tomatoes. How can a comedy that has a synchronized dance routine where nuns and orthodox Jews swim along side each other and Orson Welles narration (Orson Fucking Welles narrates the movie!!!) be so forgotten and, in some cases, loathed? The main criticism of it seems to center around the rougher edges of Brooks style of humor, which can only mean that none of the offended parties must have seen Blazing Saddles and its cornucopia of racially charged humor. The only advice I can offer those who doubt its place among the best of the many comedies of Brooks comes right from the closing scene, when Josephus (Gregory Hines) rescues Comicus from a mob of angry French peasants. “Don’t be square, mon frère. Movies is magic.” Give yourself over to the many charms of History of the World, Part 1, and you may find out just how right that is.