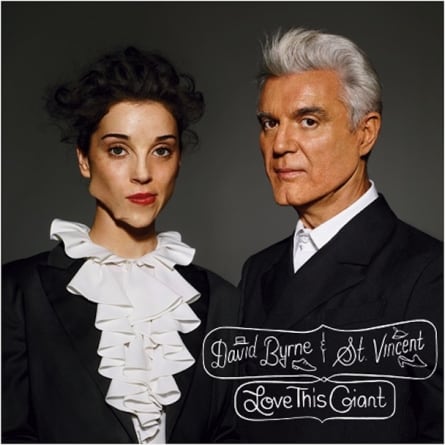 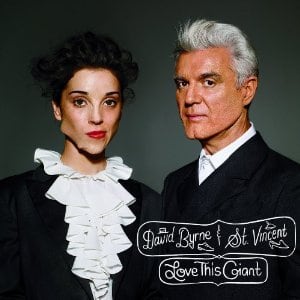 With their powers combined, you’d expect an alliance between David Byrne and St. Vincent (Annie Clark) to be a colossus. After all, what started as a one-off performance together in 2009 surged into a long correspondence-centric collaboration. But in Love This Giant Byrne and Clark are quick to show their horns (if you’re turned off by gratuitous sax then consider this album a cold shower). The end result is a mind meld between two cerebral musical savants that’s so top-heavy it’s less of a giant than it is rippling with protuberances like the Elephant Man.

Love This Giant is not a concept album, though at times it masquerades as one. Take the album’s cover, a slightly surrealist deformity of Clark’s face paired with the handsome augmentation of a square-jawed, dimple-chinned Byrne. This reversal of the typical Beauty and the Beast dynamic (especially given Clark’s actual physical resemblance to Disney’s Belle), draws attention to the dualism often expected of collaborative projects. Yet, Byrne and Clark are not yin and yang, fire and ice or beauty and beast. They are artists from different generations who nonetheless have complementary sensibilities and surprising parity. Sure, they balance each other’s excesses — Clark’s emotive presence tempers Byrne’s observational tangents — yet both artists are throbbing art brains whose penchant for abstraction makes them come off as icily detached at times.

The album aspires to be mythic, with biblical and fantastical imagery aplenty. There are mountains and rivers, animals and statues, awakenings and war. “The One Who Broke Your Heart” best illustrates how this duo mixes the folkloric with the urban. After Byrne invokes heaven and hell, he wails, “In the Garden of Eden/ On a hot summer day/ We were totally naked/ Outside that small café.” Meanwhile, in “Lazarus” Clark and Byrne alternate vocal duties while pairing allegory with industrial imagery, as Byrne croons about bringing hammers down all day long before resting “in the lap of Abraham” while Clark’s repeated, “Cool water” washes over all. “The Forest Awakes” is one of the many uses of vivid natural scenes juxtaposed with Byrne’s tendency toward retro sci-fi. In the lone exception to writing their own lyrics, Clark coos Byrne’s contrived profundity “The song is a road/ The road is a face/ The face is a time/ And a time is a place.” There’s a palpable Talking Heads feel to tracks like “I Am an Ape” and “The One Who Broke Your Heart,” though the purported insights of “I Should Watch TV” come off as Jurassic in our digital age. Meanwhile, Clark’s soothing influence permeates “Ice Age” as her silky vocals seem to almost call and respond to the skittering brass.

Though the horns are front and center throughout (at times cacophonously so), sub-bass and drum machines play a significant supporting role. “I Should Watch TV” contains the actual lyric, “Love this giant” and does so with the aid of a lumbering sub-bass line (one that returns again on “Lightning”) that may as well be bellowing “fee-fi-fo-fum.” The smattering of drum machine throughout the album, though rarely in the fore, comes off as lazy and imbalanced with the meticulously arranged brass and woodwinds. Meanwhile, Clark’s crystalline voice alone seems to quell the frenzied horns in “Optimism,” which may be the only truly gorgeous song on the album.

When all is said and done, Giant is a successfully unique collaboration. Byrne’s voice is as engaging as ever and, now at 60, has held up much better than many of his contemporaries. Such a high-profile alliance will surely raise St. Vincent’s already burgeoning stock, and Byrne has put out his first record since his joint effort with Brian Eno in 2008. The album grows on you with repeated listens but may initially cause a few winces as it slowly wriggles in its hooks. Though falling short of outright triumph, and while the brass and woodwind arrangements may prove to be more effective and theatrical on their upcoming tour than they do on the album, Love this Giant is worth the climb up the beanstalk if you don’t mind maneuvering around a few thorns.