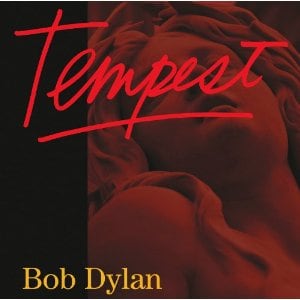 Robert Zimmerman has been placed on so high of a pedestal by critics and fans alike during his long, strange, unparalleled career that every bit of hyperbolic praise, no matter how over-the-top, seems rather mundane at this point. He has been called a poet, the voice of a generation, a prophet and a legend. Dylan has been said to possess the social consciousness of his hero Woody Guthrie, the deconstructive playfulness of Pablo Picasso, the formal bravery of Allen Ginsberg and the dark humor of Mark Twain. Yet, when one considers his 35th studio album, a comparison to another great artist comes to mind. Like William Faulkner, the Southern wordsmith and chronicler of the fictional Yoknapatawpha County, Dylan invites us into a distinctively dark, yet eerily hospitable, emotional space. Death hangs over Tempest like the ominous vultures circling above the rotting corpse of Addie Bundren in Faulkner’s masterpiece As I Lay Dying.

For an album so obsessed with mortality, Tempest begins innocuously enough. “Duquesne Whistle” is a jaunty little train song. The choppy rhythm guitar, walking acoustic bass line and shuffle drum pattern invoke the sounds of Bob Wills and the Western swing genre. By the time Dylan’s raspy 71-year old voice comes in, we feel like we should be listening through an antique, tinny radio rather than a modern speaker system. At the same time, the subtle touch of the churchy organ in the background, one of the sounds Dylan is most associated with, summons the spirit of “Like a Rolling Stone.” As the speaker reflects on lost lovers and innocent times, there’s a touch of darkness with the line, “Listen to that Duquesne whistle blowing/ Blowing like it’s gonna kill me dead.” It’s a mere preview of the carnage to come.

The next track “Soon After Midnight” continues the nostalgic tone. It sounds like a doo-wop ballad from the 1950s, the kind that might be played at a high school prom scene from a movie set in that time period. Dylan begins with the rather clichéd rhyme, “I’m searching for phrases/ To sing your praises,” but redeems himself with such emotionally resonant lines as, “When I met you, I didn’t think you’d do/ It’s soon after midnight, and I don’t want nobody but you.” The gentle manner of “Duquesne Whistle” and “Soon After Midnight” gives way to the more caustic “Narrow Way.” The chorus’ main lyric, “If I can’t work up to you, you’ll surely have to work down to me someday,” in typical Bob Dylan fashion, was lifted from an old blues song. It’s one of the record’s most cynically spirited tunes, with such badass rock ‘n’ roll lyrics as, “Even death has washed its hands of you.”

If Dylan dips his toes in a pool of dark thoughts on “Narrow Way” and the following track “Long and Wasted Years,” he dives in headfirst on the next couple songs. The ultraviolent line “I got something in my pocket make your eyeballs swim/ I got dogs could tear you limb from limb” from “Pay in Blood” leads to the dirge-like vibe of “Scarlet Town.” The peak of Tempest’s violence comes with “Tin Angel,” a recounting of a bloody triple homicide/suicide. The tune conjures up dark Faulkneresque feelings not only through its grisly subject matter but also through its minimal texture. The cymbal, acoustic bass and banjo create an empty, disturbing space that only Dylan’s gravelly voice can fill.

For all of Tempest’s violent subtleties and complex emotions, there are moments that seem painfully obvious in comparison. Take the title track, for example, a fast, traditional waltz about the sinking of the Titanic. At 14 minutes and 45 verses, one is reminded of what a critic said about Milton’s Paradise Lost: nobody ever wished it longer. The melody isn’t inventive enough and the lyrics aren’t poetic enough to sustain interest for that long. Closing track “Roll on John” is a heartfelt tribute to Dylan’s dearly departed friend John Lennon. It’s hard to deny the sincerity of the tune, but one can’t help but wince at the songwriter’s clumsy, somewhat random inclusion of direct lyrics from Lennon songs, such as “Come together right now over me” and “I heard the news today, oh boy.” Although “Roll on John” is an imperfect panegyric, it seems like a fitting conclusion to a record obsessed with the fragility of life. Whoever we are—whether the victim of a bloody murder, a doomed passenger on a sinking ship or a hero to an entire generation—the vultures will descend on us all eventually. As for Dylan, he’s standing defiantly, daring the birds to even come close.