The vast, vast, VAST majority of books on hip-hop are absolutely awful. For one thing 80% of them are about either Tupac or Eminem, and even THEN, there’s next to no discussion about their actual music. More often than not, the hip-hop selection of your local bookstore will consist of pretentious struggling cultural studies majors repackaging their thesis about how “Pac’s thug persona is responsible for rap’s othering the masculine gaze of capitalism through deconstructing the feminine mystique” or other such bullshit. That’s precisely why Brian Coleman’s Check the Technique is so excellent. It details the making-of 36 rap classics but, instead of just offering his own take on it, Coleman just offers 2-4 pages of context and then lets THE ARTISTS THEMSELVES explain how the album came to be track-by-track. Originally released with a slightly different chapter listing as Rakim Told Me, Check the Technique is the most insightful, informative and valuable book on hip-hop that’s ever been released. -Chaz Kangas 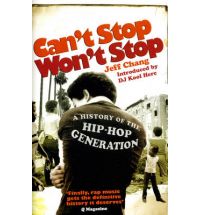 Can’t Stop Won’t Stop: A History of the Hip-Hop Generation by Jeff Chang (2005)

As its title indicates, Can’t Stop Won’t Stop: A History of the Hip-Hop Generation goes beyond examining hip hop as a mere genre. Instead, Jeff Chang’s book takes the medium seriously as what all of us hip-hop fans recognize it to be: a culture, absorbing a myriad of influences while also reaching out and touching countless aspects of contemporary American life. To understand not just the music but also the culture that serves as its connective tissue and the generation itself that gave birth to and then raised hip-hop, Chang’s absorbing, street-smart tome is required reading. With it, you will understand hip-hop’s origins, which are often unknown to even those who consider themselves “in the know” today. You will also begin to understand how it is that hip-hop has captured a generation’s attention, not only artistically but also politically. In some ways, Chang’s book isn’t just about a form of music. Instead, it is about those aspects of the last three decades of American life that can only be understood after we comprehend this music. – Trevor Link 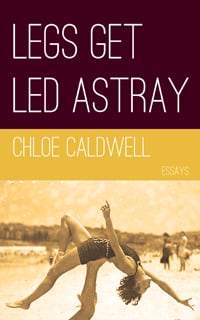 Chloe Caldwell’s memoir Legs Get Led Astray is not about music any more than it’s about any other subject. The essays wander in, out and around Caldwell’s tumultuous twenties: drugs, orgies, suicidal lovers, dilapidated New York apartments. But music punctuates the text, starting with the first memoir essay describing all the aspirations she had as a child. She wanted to sing on Broadway, on “Barney & Friends,” as Gwen Stefani in her high school talent show. We begin the book humming along the ‘90s with bright-eyed Chloe, and then descend into darker territory. In Brooklyn, Dr. Dre and Snoop Dogg rattle through tinny laptop speakers propped on a garbage can. Animal Collective, the Kinks and Bon Iver narrate doomed affairs. Paired with details like “Remember Obama election night sex?” and we’re right back with her, in the song, in that intoxication of being the rock star in our own black, ugly world for one fleeting moment. Then the track is over, the glitter gone before the download was complete—a perfect pace for this honed chronicle of mid-00’s wanderlust. – Tabitha Blankenbiller 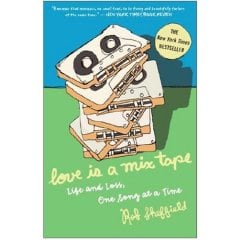 Although my shelves groan with the weight of beloved Nick Hornby novels and amazing oral histories of various scenes, when push comes to shove, my favorite book about music love story about a girl in Charlottesville in the mid-1990s. Rob Sheffield’s Love Is a Mixtape is the story of him and his first wife, Renée, told using a series of mixtapes he made for her as a framing device. Sheffield tells his story of moving to the South, hating his life and then falling head-over-heels for a local girl who opens his mind and his world with such specificity and pathos, it’s impossible not to be moved. Within pages you’ll have fallen in love with Renée too and when he’s suddenly faced with her loss (no spoiler, the book is as much about mourning her as anything else), you’ll feel it in your gut. Throughout the book, Sheffield masterfully illustrates how music is a lifetime companion amplifying the joy of good times, offering comfort during the bad times and always connecting us to people and places from our past. This is must-read for anyone with, as Jack Donaghy says, “two ears and a heart” but I warn you, don’t do it alone on a Sunday night because you WILL cry. – John Tryneski 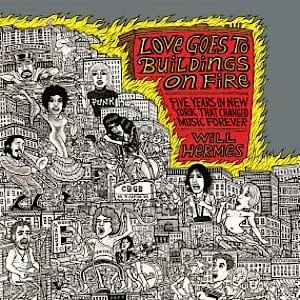 Love Goes to Buildings on Fire: Five Years in New York That Changed Music Forever by Will Hermes (2012)

Trying to tie together the loose threads that bind disco, hip-hop, punk and new wave sounds, on the surface, like an idea that belongs on the scrap heap of insane book ideas. The fact that Rolling Stone writer Will Hermes manages to pull that very thing off in his eminently readable recent book Love Goes to Buildings on Fire still feels like one part magic trick, one part skilled writing.

Set against the backdrop of New York City at its bankrupt, crime-ridden apex, Hermes walks the reader through a vivid portrait of the many underground music revolutions that burned in the various nooks and crannies of the city’s expanse. Touching on the beginnings of hip-hop in the Bronx, the quickly burning flame of the downtown CBGB scene, stadium size salsa shows and coked out disco excess, the greatest trick Hermes pulls off is weaving all of those elements together in an endlessly compelling narrative. Along the way artists as diverse as Willie Colon, Television, Phillip Glass, the Grateful Dead, Bruce Springsteen, Kool Herc and the New York Dolls make appearances. It’s enough to make you long for the wild and scary New York of the past, when it seemed more likely to burn down than turn into a glorified theme park for the rich. – Tom Volk