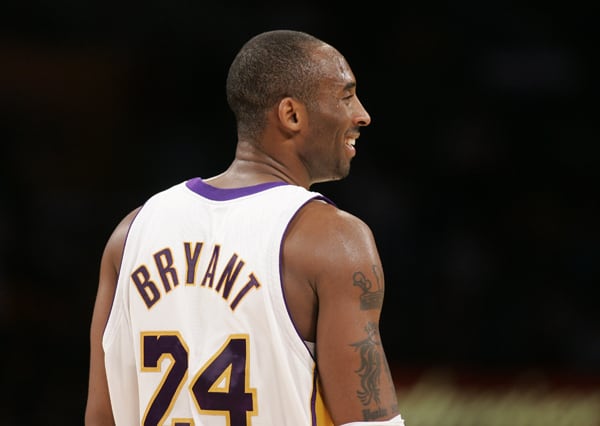 Spike Lee’s documentary Kobe Doin’ Work is essentially little more than a Kobe Bryant commentary track appended to a stylishly filmed basketball game (the film’s director of photography, Matthew Libatique, is best known for his collaborations with Darren Aronofsky). As such, those without any interest in basketball will probably stay away, but even so, it’s not too difficult to understand the appeal of the project for Lee beyond the opportunity to hang out and talk shop with arguably the greatest basketball player in the world at that time (Bryant would go on to win the league’s Most Valuable Player award at the end of the season depicted in Lee’s documentary). Lee, of course, is a passionate basketball fan—he can often be seen courtside during New York Knicks games, just as Phil Jackson has become a veritable mascot for Bryant’s own Los Angeles Lakers—but more than this, he is a craftsman, and the emphasis in the documentary’s title on “work,” a coy understatement for a player who tends to score at a dizzyingly high volume, asserts a sort of rugged, workmanlike quality to Bryant’s athleticism, perhaps the same qualities Lee would like to claim for his own work as a filmmaker, distinguished by its hospitable, unpretentious exterior. But as we hear Bryant comment on the game we are watching, facing off against the San Antonio Spurs, we realize that he sounds, perhaps more than anything else, like a film director, describing the way he scopes out the action and guides his teammates to their positions on the court.

And so Kobe Doin’ Work is often as much about Lee’s presence, and the implied relationship between himself and Bryant, as it is about the star athlete who occupies center stage. Lee modulates his tone throughout the film from that of awe in the presence of a superhuman performer, quite unlike Lee despite his work as an actor in his own films, to a kind of convivial camaraderie, the frank exchange between two intelligent, successful black men. In effect, Lee’s framing device for his film—the image is of the game, showing us Bryant the athlete, but the audio invites us to hear Bryant the exceptional thinker—partly nods to the fact that African-Americans endure a painful dichotomy, in which their physicality is accentuated while their capacity for thought and feeling is relegated to the background. The structure of Lee’s film pairs these two dimensions of humanity, restoring a holism to black identity, and although this is largely a no-frills documentary about a basketball player, this deep accentuation of unrepentant blackness, identity not thrown in the face of the audience but merely allowed to exist freely without constraints, is wholly consistent with Lee’s work as a whole.

The coupling of Bryant’s thoughts to footage of his actions also allows us to understand that he is, in fact, a remarkably intelligent man. This aspect of Lee’s documentary distantly recalls a moment from his own film Malcolm X, where Malcolm laments that the black men he saw all around him, like mathematical genius West Indian Archie, could have used their talents for more dignified, even simply more advantageous, ends had racial prejudice on a personal and institutional level not constricted the opportunities available to them. This complaint comes from Malcolm X himself, an extract from his autobiography rather than an invention of Lee, and today, it manifests itself in the idea that black men can only achieve legitimate success through “balling” or rapping (and although we’d all probably like to forget it, even Bryant has attempted the latter). Bryant’s physical capabilities and athletic aptitudes made basketball an obvious career choice, but it’s worth noting that his keen mind would have certainly served him well in any number of fields, and Lee’s film doesn’t so much highlight this as it merely gives Bryant a space in which to plainly prove this to be the case. 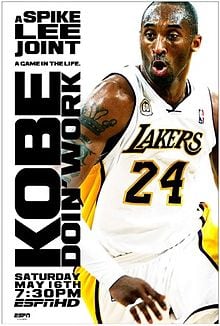 One of the aspects of Bryant’s keen mind that might surprise some is his facility with languages. Growing up in Italy, where his father Joe “Jellybean” Bryant played basketball, Bryant became fluent in Italian, which he occasionally speaks in Kobe Doin’ Work with, of all people, his Slovenian teammate Sasha Vujačić. He’s picked up other languages along the way, which he uses to communicate with his teammates: French for Ronny Turiaf, Spanish for Pau Gasol and, as we hear in Kobe Doin’ Work, Serbian for Vladimir Radmanović. For a director who has filmed so many kaleidoscopically fractured communities, Do the Right Thing being the archetype for this, Lee must find something comfortingly satisfying about the Lakers’ sense of cosmopolitan community, led by the well-traveled, culturally mindful Bryant. In Lee’s film, aided by the camerawork of Libatique, Bryant is transformed into an American culture hero: occasionally, Lee depicts sequences of the action in a rhythmic series of black-and-white still images, often accompanied by reflective, stirring music composed by Bruce Hornsby (who’s working here in an elegant, vaguely Americana vein somewhat reminiscent of the Aaron Copland music Lee used for the basketball drama He Got Game). These images, which momentarily place Bryant in the realm of the purely iconic, are an example of myth-making at its finest.

Lee’s fractured communities are built on conflict, but despite the competitive nature of basketball, Bryant’s attitude is remarkably peaceful. Even against rivals the Spurs, Bryant enjoys, more than anything else, the abstract beauty of the game, the Apollonian drive for order. This is the case even when Bryant describes playing opposite the notoriously stingy defender Bruce Bowen, a man feared throughout the league not only for his defensive prowess but also for the frequently underhanded tactics he employs to stop his opponents: describing Bowen, Bryant expresses joyful admiration, respect for an authentic player of the game who embodies old-school toughness. The word Bryant uses often throughout Kobe Doin’ Work is execution: he stresses not flair or virtuosity—he even reprimands himself at times for sloppily showing off and losing the ball—but exacting adherence to the rules of the game, which in his case has a lot to do with the Lakers’ so-called triangle offense. As a player, he has the balanced mindfulness not to sweat missed shots as long as he has percentages on his side, which suggests a mind less motivated by gripping passion than long-term vision and planning. And yet, in all of this, there is a dazzling grace to his dance-like performance: like a black Bach of basketball, Bryant finds transcendent beauty in his rigorous belief in a higher order.

These various qualities all coalesce subtly in Kobe Doin’ Work: Bryant the dominant athlete, the astute and penetrating thinker, the aesthetically pleasing virtuoso, the leader of a diverse community. In Lee’s film, Bryant comes across as both mythically heroic and mundanely down-to-earth—Lee captures Bryant not only through to the end of the game and the post-game analysis in the locker room but also as he leaves the arena with his wife and two daughters, the image of a perfectly normal family man. Lee seems less interested in what makes Bryant godlike or in what makes him universally comprehensible but rather in something midway between these poles: Bryant as a complex, thoughtful and talented black man, much like Lee himself. And there’s more than a little of the artist and creator in Bryant. His intelligence is most apparent not in his ability to describe everything he has done after the fact, much of which is admittedly quite instructive, but in the glimmers of genius he conveys in attempting to work through his thought process in any given moment, analyzing the millions of rapid-fire calculations and micro-decisions he made during the game. If Kobe Doin’ Work is rather like a commentary track, it’s one that puts Bryant in the position a filmmaker might occupy, attempting and failing to explain away the mystery and genius of what he has created. It’s difficult not to conclude that Lee sees something of himself in this portrait, but this is not in the least ostentatious on his part. In part, what’s most thrilling about Kobe Doin’ Work is the genuine, humble meeting of two great black minds, and though Lee relegates himself mostly to the background—he’s heard asking only a few question throughout the course of the film—his film and the way it depicts Bryant says as much about himself as it does about Bryant. Lee’s work commenting on Bryant, Bryant’s commentary merging with what we know of Lee’s own concerns: Kobe Doin’ Work is a casual pickup game between two men at the top of their fields trading shots, Bryant’s made with the basketball and Lee’s with the camera.