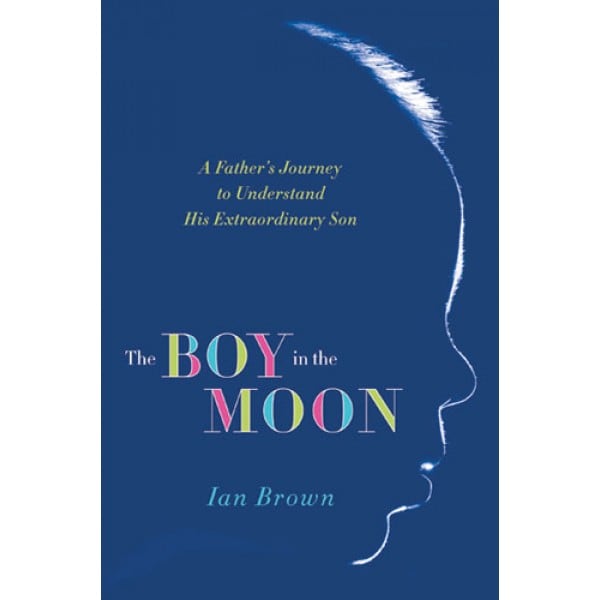 [xrr rating=3.5/5]Ian Brown’s son suffers from a rare genetic disease known as cardiofaciocutaneous syndrome (CFS), a disorder so rare that less than 100 people around the world suffer from it. Walker is severely disabled by the CFS. He is unable to speak. Since he cannot eat solid food, Walker must be fed with a feeding tube implanted directly into his stomach. He is sensitive to new sensations and cannot deal with hot and cold. Walker does not use the toilet and even at the age of 11 still wears a diaper. He is also somewhat disfigured with patchy hair with a large brow and thick lips. Walker is prone to screaming fits where he punches himself in the head. More than anything, Brown just wants to know what Walker is thinking about.

In The Boy in the Moon: A Father’s Journey to Understand His Extraordinary Son, Brown presents a warts and all examination of his life with Walker, chronicling his failures as a father, minor successes, guilt and ultimately his realization that Walker was put on this earth to teach him about his own humanity and humility. Brown writes to exorcize his fears and doubts, a confessional that appears to have sprouted into a full-bodied book.

Brown begins the book by enumerating the daily routine that comes with being Walker’s guardian. It is an exhausting list of feeding, cleaning and keeping him safe. Brown and his wife Johanna rarely get more than four hours of sleep per night. One of them is always on Walker duty. But rather than send the child to an institution, the Browns decide to persevere and take care of him. Like the best books, The Boy in the Moon makes us question our own actions in a similar situation. Many of us wouldn’t have the courage to do it.

But think of the pressures that come with having a child such as Walker and how they weigh on Brown. He must figure out a way to pay for Walker’s formula, special food that costs more than $10,000 annually. He is unable to have a private relationship with his wife since asking a sitter or family member to take Walker for an evening is just too much. Brown’s young daughter, completely healthy, is neglected. The Boy in the Moon isn’t just a story about Walker. It’s Brown trying to make sense of his life with Walker at ground zero and everything else a peripheral luxury.

The Boy in the Moon doesn’t only concern taking care of Walker. Brown, who is a feature writer for Toronto’s Globe and Mail, also does some investigative reporting about CFS, introducing us to a handful of people who also suffer from the disorder. This research opens up an even bigger question: what place do disabled people hold in our society? His investigation takes him to France where communities called L’Arche have been established for people with disabilities, a place where “normal” people are the minority.

Despite all of the suffering, Brown walks away from the book certain that Walker is nothing short of a blessing in his life. He has taught him the value of life, something that Brown has called into question numerous times since Walker’s birth. By the end of The Boy in the Moon, Walker is 13 years old. He still cannot talk and Brown has sent him to live at a facility that can better care for his needs. We feel the gaping hole in Brown’s life, the place in the house that Walker used to inhabit. The Boy in the Moon and Ian Brown do something noble, they teach us the value of life, no matter how far away it is our from our perception of normal. There’s nothing really nobler than that.