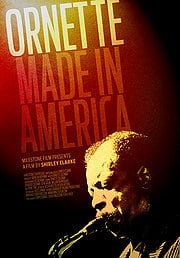 [xrr rating=3.75/5]Originally released in 1985, Ornette: Made in America has received a frame-by-frame restoration from Milestone Film in a broader effort to restore independent filmmaker Shirley Clarke’s work. In the 27 years between the film’s release and this new reissue, a time marked by Coleman’s elevation into the pantheon and even a Pulitzer Prize for his 2006 album Sound Grammar, the music has lost none of its ability to challenge, bewilder and awe. Rare is the member of the avant-garde not blunted by time, but even rarer is the outré artist whose enduring weirdness meshes without contradiction with his gradual recognition by the culture at large.

Clarke’s film opens in 1983, with Coleman returning to his native Fort Worth, Texas, to receive a key to the city and the honor of a commemorative “Ornette Coleman Day.” Preceding this ceremony is a playful recreation of an 1887 gunfight that took place on the same street, widening the cognitive dissonance of seeing a musician so extreme that he faced audience outrage as intense in the elitist circles of New York as he did in the more traditional home state he left receive his belated dues. Stranger still is the implication that Coleman could become a piece of popular local history like that duel, subject to recreations for the pleasure of families and small children. Just imagine a century from now, a hired hand in period clothes coming out for parades to suddenly brandish a saxophone and slay re-enacting critics and listeners with a blast of “Lonely Woman.”

For all the experimental techniques the director puts into the rest of the movie to visualize Coleman’s music, nothing in Ornette can match the perplexing imagery this thought conjures. Nevertheless, the film does manage the impressive feat of visually translating the form-breaking intensity of Coleman’s sax wails, squeals and unexpected tunefulness and the frantic, polyrhythmic backing of his fusion band, Prime Time. Rapid montages and incongruous image overlays capture the spontaneity and individuality of expression within Coleman’s free jazz pieces, while the lightning-fast juxtapositions and repetitions hint at an underlying structure that confirms him as a true composer and not merely a squawker extraordinaire.

More importantly, however, the flourishes dig beyond the aesthetic difficulties of the music to bring out their beauty and their connection to a broader social and artistic history. Armed with saved footage of Clarke’s failed effort to document Coleman in 1968, as well as clips assembled from various performances and areas, Clarke crafts a miniature history of Coleman’s personal sphere. She casts a boy as the young Coleman, playing on the train tracks of the poor, segregated neighborhood where the artist grew up. This adds a degree of social separation to Coleman’s status as an artistic outsider, driven out of the South by open hostility to his revolutionary sound. The suggestion of racial strife and working-class hardship also lends an insight into Coleman’s abrasive playing style—and the free jazz he pioneered—as a raw exposure of pain that cannot be put into words, cannot even be put into classically “acceptable” compositions. Viewed through such a prism, Coleman’s playing becomes not alienating but among the most beautiful sound ever wrung out of an alto saxophone.

Ornette also places its subject within a larger framework of art that stretches temporally and spatially. Footage collected in Nigeria links Coleman’s supposedly ultra-modern music to the tribal beats from which all music ultimately flowed, the multiple drums and voices of African musical communication blending well with Prime Time’s compounded rhythm section of two bassists and two drummers all tracing out their lines within a broader collective noise. Clarke later leaps into space as talk of Coleman’s music turns to focus on its advanced complexity, effectively making the artist’s saxophone the bone/space station in 2001, a link between civilization’s expression at its beginning and at the edge of its future.

When Clarke shows a bevy of middle-class, white Texans arriving in tuxedos and gowns to witness a live performance of Coleman’s Third Stream record Skies of America, she does not suggest that Coleman has been co-opted so much that his music, once corrosively divisive, now unites. The prodigal son of a segregated Fort Worth now receives kisses on the cheek and glowing adulation from middle-aged women whose mothers might not have let him into their homes when he was a boy. Various, eloquent admirers all offer their thoughts on Coleman’s genius and his lasting contributions to American culture, but Ornette’s greatest demonstration of its subject’s mastery of universal communication is in its clips of his performances, specifically the way that a gig at a club engenders as much enthusiasm from the crowd who just came to dance as the symphonic performance does from more “refined” tastes.