August 08, 2020
Home Books The Sense of an Ending: by Julian Barnes 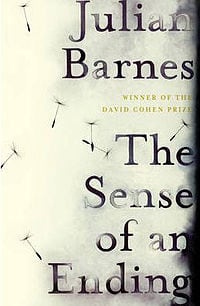 [xrr rating=4.25/5]Memory is a tricky thing and in The Sense of an Ending, Julian Barnes’ slender, yet profound 14th novel, an unreliable narrator shows just how slippery remembrance can be. Winner of the 2011 Man Booker Prize, The Sense of an Ending is a subtle mystery, one that mostly takes place within the mind of its narrator. But by its ending, it is impossible to walk away unshaken as we watch a lifetime tied up with certainty implode with the addition of new layers of truth.

We all have those missed romances of our youth, the one who got away that still niggles at the mind decades later. How far has our own recollection distorted and changed what actually happened, the fog of time and arrested perception creating a mythology that hangs over your life. It’s not only romantic. We outgrow friends, leaving the conflict and the pain behind on the dusty back roads of our lives, only to be swallowed up and chewed out by new experience and the lack of closure.

The Sense of an Ending begins when its narrator, Tony Webster, receives a mysterious inheritance from the mother of a girl he dated in college. It is 40 years later and Tony has not accomplished anything exciting with life, surviving through one failed marriage that produced a daughter. But the bequest sends Tony plunging back into the angry scar of his failed relationship with Veronica, a connection that ended abruptly and without resolution four decades prior. Back in school, Tony and his friends considered themselves intellectuals, fueled with romantic notions that tied adulthood with freedom. They were the boys who engaged their teachers in discourse yet scoffed at peers who wrote bad, overwrought poetry. Entering the fold of Tony’s social circle was Adrian Finn, an extremely intelligent boy whose genius overshadowed the hopeful intellectualism of Tony and his other friends.

Barnes spends the first section of The Sense of an Ending establishing Tony’s history with both Adrian and Veronica. Tony feels exposed by Adrian’s intelligence, a yearning that leads the new boy to ponder aloud one day, “I hate the way the English have of not being serious about being serious, I really hate it.” These words stick with Tony, who years later is living the life unremarkable he always rallied against having fallen into the deadening loss of adolescent wonder and settling into the routine that grips so many adults and shakes out the passion and poeticism.

Mirroring this devolution is Tony’s relationship with Veronica, a tragedy that Barnes’ unreliable narrator slowly reveals to be more than Tony initially wills himself to remember. At first glance, Veronica is a willful bitch, a venomous cock tease who would rather get her own way which includes chastising him for enjoying Dvořák and Tchaikovsky and leaving him in a perpetual horny state without any release. But as the book progresses, Tony reveals that perhaps he wasn’t completely victimized in the relationship and the lack of intimacy is something that he desired, unable to handle consummation, whether it be sexual, emotional or spiritual. Spurned by Tony, Veronica runs into the arms of Adrian, severing the friendship between the two boys.

Telling any more would ruin the deliciousness of Barnes’ devious mystery. However, this literary page-turner is more than a whodunit about feelings. It is a work of rare introspection that confirms the root of truth at the base of Socrates’ famous quote about the unexamined life. The bequest has reawakened Tony out of 40 years of complacency. But as he rolls up his sleeves and contacts Veronica again, he must not only deal with his own hurt but the tragic legacy his words had inflicted upon the lives of others. It is amazing that Barnes could pack a lifetime of introspection into a volume so slim you will likely want to read it all in one sitting.