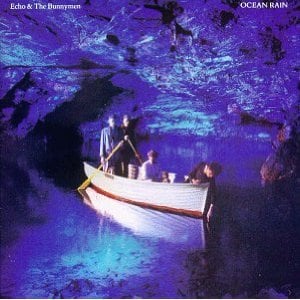 It was marketed as “the greatest album ever made.” It combined the powers of a member of the first wave of post-punk bands with the grandeur of a 35-piece orchestra, a move reminiscent of the evolution of the pioneers of 1950s rock ‘n’ roll. It mixed surreal poetry with Eastern-influenced guitar lines, symphonic majesty with abrasive pop song structures, all while remaining a cohesive, disturbing and beautiful album. It is Ocean Rain, first released by Liverpool rockers Echo & the Bunnymen in 1984, and it remains both the band’s highest peak and breaking point.

By 1984, Echo & the Bunnymen had reached a fork in the road. Their first three albums, Crocodiles (1980), Heaven Up Here (1981) and Porcupine (1983) had established the quartet as a band of note among the post-punk explosion in Northern England, one that differentiated itself from its peers by the strange wordplay of singer Ian McCulloch and the melodic, angular guitar work of Will Sergeant. Along with the rhythm section of Les Pattinson (bass) and Pete de Freitas (drums), they had swiftly become one of the weirdest of an inherently weird collection of bands that at one time included the Cure, Joy Division, the Teardrop Explodes and the Fall. But they also had a pop sensibility that eluded many of their contemporaries (save maybe the many permutations of Robert Smith’s mopiness), one that had scored increasingly high ranking albums on the UK Albums Chart. But even while the band moved slowly and steadily up the charts, they pushed further into experimental territory, with Porcupine being their darkest, most abrasive album yet.

So where to go? The answer was the lushness and precise songwriting of Ocean Rain. The album was a grand leap forward for the quartet, adding a huge, monumental sound to the wiry energy and barely repressed madness of their earlier recordings. From the opening track (and second single) “Silver,” it’s clear how much more ambitious they had become. With the jangle of an acoustic, treated guitar and the quick stab of strings drawing you in, it’s an immediate, head turning song filled with McCulloch’s characteristically bizarre lyrics like, “Swung from a chandelier/ My planet sweet on a silver salver/ Bailed out my worst fears/ ‘Cause man has to be his own savior.” The singer had always been open about how much Jim Morrison and the Romantic poets influenced him, but Ocean Rain brought a whole new level of obtuse imagery to his words. From the alternating chants “Ten a penny/ (You’re a bitter malignous person) Ten a penny (And the death is well overdue)” in the coda of “My Kingdom” to the stuttering vegetable references of “Thorn of Crowns” “C-c-c-cucumber/ C-c-c-cabbage/ C-c-c-cauliflower/ Men on Mars, April showers,” McCulloch is in his finest form.

And the rest of the band (as well as the orchestra and their arranger, Adam Peters) hold up their end just as well. For all the orchestral wave that both overwhelms and buoys each of the nine tracks, Sergeant, Pattinson and de Freitas are never drowned out by the sound. Instead, they sound like they’re riding the wave, controlling it with their musical abilities. Part of this is due simply to the strength of songwriting; every track has a unique hook, some subtler than others. “Silver” and “Seven Seas” are both distinct, guitar driven songs supported by the strings and cellos, while others, like “Nocturnal Me,” are guided by a sinister, deep orchestration and imagery of fire and ice. “The Killing Moon,” the single most famous song off the album (perhaps the band’s entire career), is perhaps most indicative of the approach of “Ocean Rain.” It’s a deceptively simple, just a few chords and a soaring, enigmatic chorus, but when accompanied by a string section and punctuated with Sergeant’s eerie guitar work, it becomes far more than the sum of its parts.

For Echo & the Bunnymen, it appears that creating a masterpiece was too much, at least for a while. After Ocean Rain, the band took three years to produce their next, self-titled album, their longest span between releases to that point, and apparently the time between was fraught with interpersonal tension and alcoholism. Although Echo & the Bunnymen managed to produce the superlative “Lips Like Sugar” (one of the band’s few successes in America), it was a noticeable sink in quality and the quartet broke up shortly thereafter. Echo & the Bunnymen have reunited in several guises since to some poor releases (like the McCulloch-less Reverberation (1990)), some mediocre (Flowers (2001), which featured a new rhythm section) and some fine (Evergreen (1997), which was minus only de Freitas who died in an automobile accident in 1989). But they’ve never approached the same grandeur and complexity of Ocean Rain. And perhaps that’s as it should be: one masterpiece can be enough.