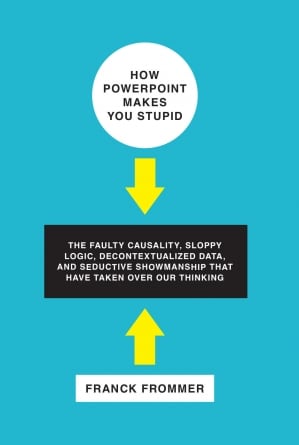 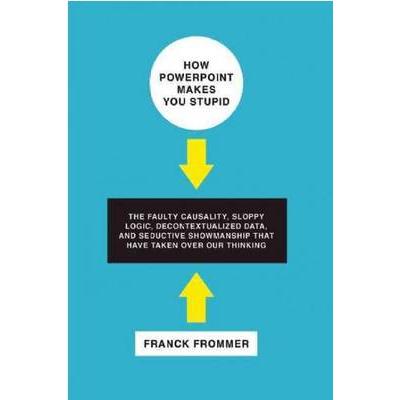 It’s only too bad that I can’t unveil my review of How PowerPoint Makes You Stupid as a PowerPoint slideshow. My intent in doing so would not (just) to be cheeky. My day job is running me over like a freight train, my father’s in the hospital with a mysterious case of anemia, I didn’t sleep well last night and I am already a day overdue on deadline. I need to put together something lickety split! I need the instant legitimacy of bullet pointing! I need you to only be paying half-attention as I click through my presentation in a darkened conference room! And to think: I could eat up whole chunks of content area with Google Image photos or animated clip art! Rats. Instead, I’m stuck having to describe thoughts and ideas and arguments in full sentences, occasionally pausing to drop in a tangential aside within the broader context of exposition. PowerPoint doesn’t make you do that. PowerPoint only asks you to pick a slide title, a handful of bullet points and if you want to go the extra mile, a showy graphic effect, like the “wipe” or the “starburst.”

This easy way out, so generously afforded by the now ubiquitous PowerPoint presentation, raises the ire of French journalist Franck Frommer. Within the book’s pages, Frommer describes a medium gone amuck, a programming design that not only redefines the presentation of rhetoric, but vastly more importantly, the conception of it in the first place. Whereas a written brief, memo or report operates on a narrative, discursive and connective level, PowerPoint takes the slash-and-burn, proximity-as-causality approach. Frommer sets up his discussion by outlining the history of task management in the modern workplace. In the hierarchical model of decades past, there was constant activity flow up and down the line: bosses made decisions, management implemented them, workers practiced them. Authority was clear; actual people made actual policies. Frommer argues that PowerPoint depersonalizes workplace communication: the slideshow has a presenter, but no recognizable author. So if no one specifically has written the material, there’s no one specifically to challenge or engage about it. The facts are, simply, the facts. Since they are presented on a screen as facts, they almost become facts, even if they aren’t facts, or aren’t quite facts yet. Presentation is legitimization.

The problem of what is presented as fact is another area in which Frommer is particularly interested. He cites specific examples both within the bureaucracy of his native France (the potency of which may be diluted to American readers unfamiliar with the agencies he references) and, perhaps more infamously, American fiascos such as Colin Powell’s PowerPoint address to the U.N. persuading its members that Iraq possessed weapons of mass destruction. Frommer’s assertion is that PowerPoint makes up for in theatrics what it lacks in rhetorical nuance. In worst cases like Powell’s speech, the program is little more than a showcase for justifying foregone conclusions. In our workaday 9-to-5s, the PowerPoint slideshow is altogether less nefarious but still intellectually insulting: it’s a snoozy information share, a nexus at which the thinking man’s crutch levels up with the dullard’s brass ring.

The discussion of how PowerPoint acts upon symbolic intuition (arrows will have you thinking causality just by virtue of their inclusion on the slide) and devalues words that evoke specificity and complexity, favoring instead vague corporate jargon (i.e. “To master development costs on a competitive basis”) is the most damning – and philosophically impactful – of Frommer’s complaints. Ironically, if the book is short on one thing, it could use more exhibits of PowerPoint slides to illustrate his deconstructive analysis. And though he does balance his criticisms by admitting that PowerPoint is problematic because of careless implementation as much as by its pro forma construction, there is little talk of how the program can be an appropriate training module when the source material befits its design, for example, in giving visual orientation to codified standard operating procedures or step-by-step instructions.

In a corporate culture where PowerPoint print-outs serve as agenda, meeting and minutes all in one, How PowerPoint Makes You Stupid asks us to look beyond simplicity for simplicity’s sake, especially because most of those packets end up summarily disposed of not in the braintrust, but in the circular file.