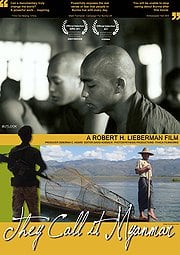 [xrr rating=3.0/5]The second most remote country in the world, Myanmar, formerly known as Burma, remains largely cloaked in silence, with scarce hints of modern poverty and ancient beauty managing to peek through. Plunged into turmoil in the years after World War II, as British colonial rule ceded to Japanese occupation, unilateral dictatorship and eventually a faceless military junta, the country has maintained a low profile, a condition ready to be remedied by Robert H. Lieberman’s documentary portrait. Clearly enraptured by this strange land, Lieberman crafts a film that, despite an effusive sense of passion, never gets a clear handle on what it wants to present.

There’s a lot to appreciate in the film’s 85 minutes, but as illuminating as it may be at times, They Call it Myanmar suffers from a lack of originality and a distinct shortage of focus. This could be the 98th in a 196 part series on nations of the world, so lockstep is it with the dour standards of by-the-numbers travelogue filmmaking. We learn a few requisite bits of background about the nation and its people, which leads into an exploration of the country’s dark side (crippling poverty, substandard education, repressive rule), which threatens darkness but inevitably ends on a note of mixed hopefulness.

The specifics here elevate the material above its form, mostly because Myanmar is such a strange and uncharted topic. Possessing a vanished imperial past evinced by a landscape of ruined cities and towering temples, it comprises 180 languages, dozens of ethnic groups and a staunchly Buddhist populace, with monks functioning as the strongest defense against the domineering government, which has ruled since 1988. The film positions the country as a pre-globalist wonderland, with a people that remain mostly untouched by international pop culture. This unspoiled nature has its obvious downsides, especially since most of that isolation results from the tight grip of its government, which keeps the borders closed and the media under its control.

The government also tampers with election results and imprisons its enemies without a trial. The film fleshes out most of this political background through interviews with Aung San Suu Kyi, who won the 1990 presidential election and was placed under house arrest for the next 20 years. But current events indicate a thaw. In 2011, Kyi was finally allowed to accept the Nobel Peace Prize she won in 1991, and news reports just this week have detailed the release of more political prisoners, indicating a further détente by President Thein Sein, a former military strongman who’s lately been described as the country’s Gorbachev.

Myanmar adroitly spills out abundant information, but it’s so ordinary in its presentation that it’s hard to say why this is a movie and not a book or magazine article. This is par for the course in the post Inconvenient Truth era, when a clearly argued documentary is the clearest conveyance for bringing attention to a pressing issue. But the lack of movie-specific focus leaves the film feeling weak, only approaching cinema in a segment on the people’s fear of being filmed, conducted through a series of interviews focusing on chests, hands or feet, a reductive scope that mirrors the country’s internal and external restriction. This shows quick thinking by Lieberman, and the result is startlingly unique, the most memorable moment in a thorough but dry collection of scenic highlights and camcorder voyeurism.