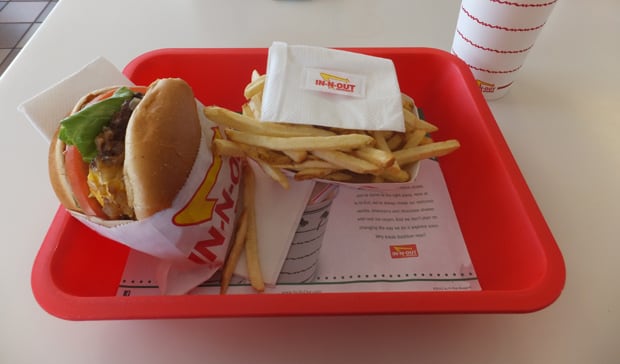 I’d been to Los Angeles once, about five years ago. Before I really gave a shit about food. I don’t remember much about what or where I ate; some garlic-centric restaurant, a small sushi spot, the ubiquitous In-N-Out, and to make it all worse and completely forgettable, a Thanksgiving dinner which my friend and I prepared that we are embarrassed to even speak of now. Not the best introduction to or memories of the L.A.-area food scene. I mean, I didn’t even get a goddamn taco. What the hell?

This time, I was prepared. I was determined that my return to the City of Angels would not be an epicurean failure. Admittedly, my standards had been set fairly low. Combine the previous culinary experiences with my aversion to L.A. and I didn’t expect much, if anything, to impress me. Maybe that’s because I’ve been living in New York too long. Or maybe I’m just a snobbish dick to begin with.

After running through the terminal at JFK at 7am and getting a “breakfast sandwich” on the plane that was the size of a hockey puck and didn’t have any breakfast-like components, I was quite ready for brunch when I landed at LAX. I was quickly whisked off to Aroma Coffee & Tea Company in Studio City. Aroma is a charming cafe situated inside of a former residence. Each room has a distinct feel to it and there is seating outside and along the sides of the house.

I ordered the New Leo’s Special; a scramble with lox, cream cheese, onion and capers. It came with rosemary red potatoes and olive toast on the side. The scramble was pretty good, nice and salty, as you would expect from capers and lox. The potatoes weren’t anything anything special, I barely even noticed any hint of flavor. The toast was great and I even got a little pretentious personal jar of jam to use. I enjoyed this all with a coffee in the sunshine while a guy next to me laughed at an article entitled “Top 10 Funniest VMA Moments.” Welcome to L.A.

Next was a trip to downtown L.A. for a quick coffee at St. Vincent Court, an alley in the Jewelry District. Downtown L.A. is an interesting place; full of shuttered old theaters with fantastic dilapidated marquees, homeless, and discount clothing stores. If given the chance, Jane Jacobs would have included the downtown area as a case study in The Death and Life of Great American Cities.

St. Vincent Court is this incredibly serene open air court set off from the hustle and bustle of the streets. There are several cafes and restaurants serving a range of cuisines from Chinese to Persian to tapas. It has a distinct European feel with a Mediterranean flair. The signage for the establishments are all very elaborate and over the top, in typical L.A. fashion. I didn’t have a chance to eat here and the espresso I had from Cafe Bonjour wasn’t good, but I would definitely dine at one of the restaurants given the chance. The atmosphere is unbeatable.

Dinner my first night was the highlight of the trip. I went to Sushi Kimagure (which means “whim” in English, the name basically implies they’re winging it) in Pasadena for some omakase style sushi. The restaurant only holds 34 people, 11 at the sushi bar. Chef Ike allows no walk-ins; everyone that eats there must have a reservation. Ike-san has a bit of a following in the area and it was easy to tell why. He was very generous and engaged personally on some level with each customer. He would serve his regular customers dishes he knew they liked without them even asking.

Ike-san served us a good amount of fish the hour and a half we were there. We were served one course at a time. Ike-san would watch us and when we were noticeably ready for the next course, he would prepare it and serve it. Everything was as fresh as could be. He treated us to a range of items, from red snapper to eel to uni, and to my utter delight, chawanmushi. He would give us gentle instructions on certain items; “a little soy sauce” or “eat right now!” The cuts of fish were delectably fresh and very generous in size. So much so that some pieces came cut in half for my female companion, something I noticed was done only for women. Ike-san also apologized to us at the end of the meal; he said his timing on our meal wasn’t good. You have to respect a chef that will apologize to you in front of nine other patrons.

There was one very awkward moment. Next to us were two older ladies; they obviously knew Ike-san from his previous restaurant and were regulars. However, they were still complete neophytes; they mixed wasabi and soy sauce into a slushy, disgusting mess. Even worse, they decided to give Ike-san a present in the middle of service. With the whole bar watching him, he had to awkwardly accept the present and set it aside. He was so obviously uncomfortable with the situation, but the women were oblivious. In the end, it was just another Maneki-neko, one of the fortune cat statues you see in most Asian restaurants.

Lunch the next day was the highly anticipated Sapp Coffee Shop in Hollywood, just on the edge of Thai Town. It’s a surprisingly spacious spot located in a strip mall next to an optician. I went for the Thai boat noodles, named so because they used to be served off the side of boats in Thailand. It’s a bit like pho, except not as light; the broth is based heavily in beef blood.

As always, I got the noodles loaded with the works; slices of beef, meatballs, tendon, liver, tripe and chicharrones. The broth was fantastic; very warming and incredibly chock full of beef flavor. I had some trouble with the liver, as I usually do. I had to make sure it was surrounded by a nice bite of the noodles to mask the taste. The chicharrones were a great addition, whether eaten fresh and crispy or soaked through with the broth. All this I washed down with a delicious Thai iced coffee.

That night I went to Tony’s Darts Away in Burbank. The place struck me as a stereotypical southern California bar. There were lots of local craft beers on tap. Every menu item had a vegetarian or vegan version, so no one was left with limited choices. The place had a certain edge to it that is unique to the L.A. area; it had a subtle biker influence in the decor and staff, down to the Brett Michaels wanna be busser.

I started with the Taj ma Tots. Sweet potato tots tossed in curry and cayenne with a mango chutney aioli for a dipping sauce. I usually avoid anything mango chutney, but the tots sounded too good to pass up. I could’ve done without. The flavoring was nice and strong and the aioli was surprisingly good, but the tots were soft and a little soggy. Then I got the Street Meat (everyone make your jokes;) a bacon-wrapped hot dog with ketchup and mayo, piled with griddled onions and peppers. The problem, as too often happens in sausage places, is that they heap on the toppings. I ordered this because I wanted to taste beef wrapped in pork, not onions and peppers with a hint of meat. After a bite or two the situation corrected itself as most of the toppings slid off, leaving me with what I wanted. And it was just as good as it sounds like it should be. 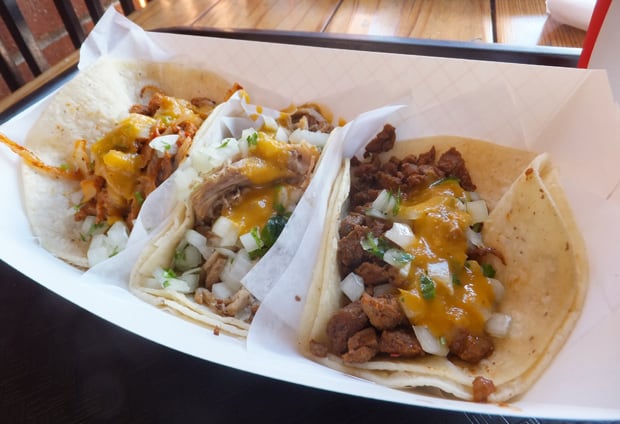 On Labor Day we had a BBQ planned, but for breakfast I insisted on some tacos. We went to Hugo’s Tacos in Studio City. It’s a little place just off the 101 with outdoor only seating. Like a lot of places in SoCal, almost every menu item can be ordered vegetarian, vegan or gluten-free. I had three soft tacos: steak, carnitas and al pastor. Each topped with cilantro and diced onions and a habanero salsa.

According to random people online, this is a middle of the road taco place. If this is a middling place, I would love to try a highly regarded joint. The tacos weren’t the best I ever had, but if this place was in Williamsburg, there would be a hipster parade every night. The meat fillings were prepared very well and I was left extremely satisfied. The salsa was nice and spicy. I had some horchata to drink, which WAS the best I’ve had. It was loaded with cinnamon and was very refreshing, especially contrasted with the spiciness of the salsa.

My last meal in Los Angeles was at the place most people identify, correctly or not, with the L.A. food scene; In-N-Out. It’s cliche, but it remains a must go. The one I went to is situated right next to LAX. It’s a great place to go to watch planes take off and land, if you can handle the constant roar of planes overhead. I had a cheeseburger animal-style with fries and a coke. It’s everything you want from a burger joint; freshly made burgers with just the right amount of fixins, crisp fries and a nice refreshing fountain drink. A perfect ending to my Southern California sojourn.

After this trip, I’m satisfied that I have a fairly good representation of what the L.A. area food scene is about. I hit almost every type of restaurant I associate with L.A. There is, of course, a lot more to see and discover. I would definitely like to get more tacos and Mexican food. I would also really enjoy delving into the wealth of Asian cuisines offered. I never thought I’d say this, but I’m looking forward to my next trip to Los Angeles.

Yotam Ottolenghi first popped into my consciousness when my vegetarian, at-the-time girlfr…