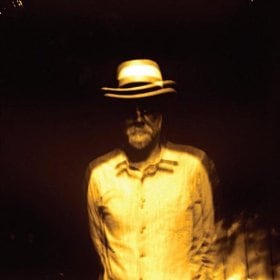 [xrr rating=3.0/5]A really solid acoustic folk album is tucked away within Mike Coykendall’s latest effort, Chasing Away the Dots, but the listener needs to wade through some filler to find it. A similar flaw plagued the musician’s 2010 record The Unbearable Being of Likeness, which too often suffered from Coykendall’s inability (or unwillingness) to narrow his focus and found him randomly jumping from psychedelia to pop to rock from song to song. Though Coykendall’s attempts to concisely assimilate these genres is commendable and shows he’s not afraid of taking chances – and sometimes failing – it adversely makes for uneven records that lack any true identity.

The strongest songs on Dots are thus the simplest ones, where the artist reigns in his eccentricities in favor of a more traditional sound. Album opener “Till the Ice Is Broken” is a deceptively shimmering track that cleverly disguises its underlying concerns about mortality; in his best nasal voice, Coykendall laments that he’s “lost in time/ It goes unspoken.” Other songs are far lighter and more idyllic: “Mr. Fly” is ostensibly set outside a Parisian café, its gentle guitar strums and near-falsetto vocals painting a portrait of carefree and entirely contented days, while the like-minded “Sunshine of the Neighborhood” revels in domestic bliss, though one wonders if it’s not at least meant to be taken as somewhat satirical. Elsewhere Coykendall’s demeanor is more somber: “Where the Wind Don’t Blow” blends acoustic guitar with subtle electronics and unfolds like a classic tale of an unapologetic lover fleeing, while an unmistakable feeling of loss creeps in on closing song “They’re Gone,” a delicate, nostalgic track that’s unarguably one of the musician’s most affecting thus far.

Some of Coykendall’s more layered compositions succeed as well, particularly the grim humor and clanging horns of “We All Gotta Go” or the quirky lyrics and cooing backing vocals on the pure-pop “The Hippie Girl.” Yet too often Coykendall overindulges himself or otherwise shows a lack of much-needed restraint. Both “Runaways & Strays” and “Strange” are pieces of dead weight, with Coykendall’s vocal delivery bearing an unfortunate resemblance to Bob Dylan circa the lean years of Empire Burlesque and Knocked Out Loaded and his writing riddled with too-cutesy wordplay like, “Don’t be a stranger/ Just be strange.” “Let It Go” is a ponderous techno song with echoed vocals; it aimlessly clunks around for a couple minutes but feels much longer. The aptly-titled “Mumbo Jumbo” is just that, a synth-heavy slog where Coykendall simply repeats that there’s a “whole lot of mumbo jumbo going around.” Indeed there is.

M. Ward, Zooey Deschanel and Ben Gibbard make guest appearances on Chasing Away the Dots, which does say something for how highly Coykendall is regarded as an artist and engineer among his peers. Dude’s definitely been around for a while and has acquired some clout, and judging from his albums he seems content to dabble in various styles, consistency be damned. Such righteous stubbornness is admirable, sure, but spending some time with Dots does plenty to suggest that the album could have greatly benefited from even the smallest amount of streamlining.