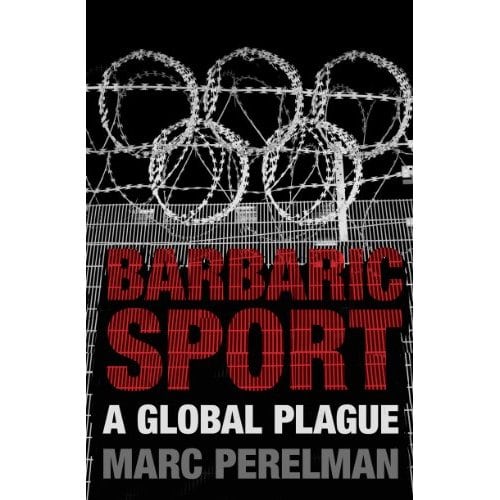 One day, I’d like to write a book about Disney and how it is the root cause of the downfall of society. I’d write bang-up chapters about how their post-war rise inculcated the youth of the United States with the misplaced values of a society based on capitalism and subjected them to subliminal sexual imagery forever perverting their fragile young minds. I’d argue that the evil Disney has stretched its corporate tentacles into every aspect of our society, inexorably changing its very fabric. And I would be dead wrong.

The central reason Barbaric Sport by Marc Perelman misses the mark so terribly, is that the argument that the spread of professional sports globally is the cause of society’s ills is simply a woefully misplaced argument. Society is the downfall of society, and to make the argument that its ills are nothing other than the strange alchemy that happens when economies, governments, media, corporations and a million other small entities interact with each other is downright foolish. Global sport is no more the cause of the world’s problems than Disney is and, in reality, it is the least of our worries.

Perelman lays out his case for the evils of sport in 19 short essays that make up Barbaric Sport. Each essay is a blend of occasionally incoherent academic prose and recycled Marxist arguments that mostly toe the line between the merely ill informed to the downright absurd with a few intelligent ones sprinkled in for good measure. It’s a shame because the good ones, cases he lays out against the corruption of the Olympics and the prevalence of doping across all sports, offer a premise that simply can’t be taken seriously when weighed against Perelman’s more outrageous diatribes.

Towards the latter third of the book is a chapter entitled “Sexuality, Homosexuality and Sport.” After suffering through Perelman’s tedious diatribes against sport as the corrupter of the world’s youth, and the modern stadium as a consolidator of proletariat group-think (those are as bad as they sound), I was hoping for a cogent piece along the lines of his Olympics and doping arguments. This would be the opportunity to rail against sports being one of the last bastions of homophobia. Instead Perelman lays out a muddled case for sports promoting homosexuality that is on the level of a “Dude, guys who wrestle in singlets are gay”-type argument dressed up in academic clothes. The fact that someone would both write this and then someone else would agree to publish it is galling. Here is an actual sentence from that essay: “…[C]ontemporary mass society, of which sport constitutes the archetype, is undergoing ‘unconscious homosexualization’ as its erotic ideal regresses towards polymorphous perversity.” Now, there are so many problems with that statement that it’s impossible to know where to start but let’s try because something so wrong-headed deserves a retort. The underlying homophobia of the entire argument is disgusting, not to mention the thought of sports promoting homosexuality is so farcical that I feel silly even trying to argue against it. Perelman tries to draw the connection between a team training together and an enclosed stadium of supporters to an atmosphere of “repressed homosexuality” which, if I’m interpreting it correctly, means that guys really can’t play team sports or watch them together without “going gay” as they say. I’ll leave it to you to do the math on that one.

It’s ugly theses like those that make Perelman’s more sensible work so difficult to take with any level of seriousness. A Professor of Aesthetics at the Université Paris by vocation, with the first hints of his regressive ideas early in the book I was ready to chalk little doses of it to some of the text being lost in translation (it was translated from Perelman’s native French) but there is just too much wrong with too many of the essays for this to be a matter of language. Still, there are a few snippets worth keeping among the dreck. Easily the best moment of the book is when he lays the birth of modern sport on France’s old rival across the channel. “Obviously, sport is not quite as ‘old as the world’. It was born in England, the classical place of origin (according to Marx).” The Greeks and Romans might have a few things to say about that, but the thought of a Frenchman blaming the English for the downfall of modern society did make me laugh out loud (this was before the homophobic rant). And to be fair, the thought that there would be no sport without doping, as he argues in the chapter “The Sporting Champion: Addiction and Drugs” is spot on. Whether it’s football, track and field, swimming or baseball, steroids and performance enhancing drugs have touched them all and none of them would be the sports we know now if it weren’t for their influence.

Perelman’s downfall is that those moments of sensible analysis are few and far between while his nonsensical ravings and ugly homophobia dominate the book. Sports is, in reality, a small part of the world that serves as a reflection for all the good, bad and ugly that the world has to offer. The crucial flaw in Barbaric Sport is that Perelman never looks past the glare of the reflection to see what’s behind it, and instead treats it as an unequivocal explanation. And that is where Barbaric Sport takes a fatal turn. Well, that and the blatant homophobia.