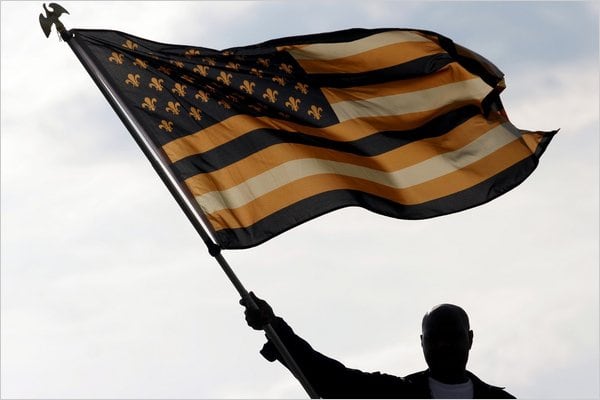 Five years after Hurricane Katrina and four years after he crystallized the rage, shock and pandemonium of the event and its aftermath in When the Levees Broke, Spike Lee returned to Louisiana on the euphoria of the New Orleans Saints’ Super Bowl victory. Watching the first minutes of If God Is Willing and da Creek Don’t Rise, it would seem as if a new dawn has risen on New Orleans. The streets that were once filled with water and festering refuse now teem with throngs of revelers celebrating both the championship and Mardi Gras. Yet just before this high threatens to give an impression of happy days having coming at last to the beleaguered state, interviewees come on-screen and deliver the blunt truth that the Super Bowl was just a game, and Louisiana’s troubles are not anywhere near over.

In a way, If God is Willing and da Creek Don’t Rise is more terrifying than Lee’s last documentary about Louisiana. When the Levees Broke focused on one subject, gargantuan in scale but honed in scope. This film, however, quickly splinters among a host of issues that have beset the state in the intervening years. Some of these problems are lingering effects of Katrina, be it long-term side effects that experts could only start to examine several years later or merely details come to light that were still buried when Lee documented the hurricane the first time. On top of this update, however, Lee must also give time to the “new New Orleans” and the attempts to restructure the city’s demographics with so many poor blacks displaced. Then, of course, there is the matter of the BP oil spill, the seemingly uncontainable disaster that lasts all throughout the shoot. 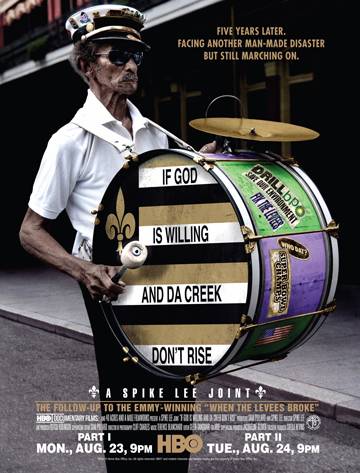 As an update on Katrina and a look at some of its rippling aftershocks, Lee’s documentary works almost as well as its predecessor. Lee focuses on the smaller details of a follow-up, checking in with many of the same interviewees to whom he spoke the last time to see how they have fared. In nearly all cases, the reports are bleak. Those who left New Orleans after losing everything—or, in the case of a woman in need of a special needs school for her autistic son, because they need facilities no longer available in the city— find themselves alienated in white, affluent communities. One woman, seen in When the Levees Broke getting a home in Utah, becomes so paranoid in her new trappings that she must return home simply for peace of mind. Peace of mind, however, does not come to her, just as it does not for many of the city’s residents, unable to cope with the trauma of the devastation. People who looked shaken but healthy in Lee’s first Katrina doc now appear harried and strung out, with a vague distance in their eyes.

Rather than do anything to address this cultural PTSD, elected officials in New Orleans collude with various private interests to expel the shivering, troubled masses who were not kept out by the hurricane itself. The city can then fill the gaps with bourgeois whites and the “free market.” Ray Nagin, who received mixed, empathetic reviews from many New Orleans residents in When the Levees Broke, now gets universally excoriated for selling out to business interests to rebuild New Orleans as some kind of retreat. In an extended segment that closes the first half, Lee delves into the case of Charity Hospital, one of the city’s most popular and civically giving medical facilities. After the hurricane, the city looked to shut down the hospital despite it suffering only minimal flooding. Instead, LSU wants to tear down blocks of historical buildings to make way for a new facility primarily designed to work through insurance companies rather than the communal duty that powered Charity.

These heinous acts of social negligence and greed give If God Is Willing a power that slowly drains from the documentary in its unfocused second half. Police brutality cases raise the blood, but they come out of left field and disorient rather than hone outrage. Likewise, the BP oil spill, horrible as it is, does not connect to Katrina in any way other than the two both stemmed from the Gulf of Mexico. In a documentary otherwise admirably dedicated to giving a second look at a major event well after it faded from the headlines, the BP coverage serves only to let people vent spleen in a way that did not even in the immediate aftermath of Katrina. When the Levees Broke overflowed with sorrow and anger, but it also offered contextualizing histories and incisive observations. People have only vitriol for BP, not unwarranted in the least but hardly revelatory the way Lee’s Katrina coverage has been.

A recurring visual tic of the interviews shows the subject in side profile, as if to redirect the speakers’ fire away from the audience and toward some off-screen, responsible party. The interviewees know who they want to accost, but the targets lie out of sight and reach. This makes the ire all the more incendiary, but it also exacerbates If God Is Willing’s key issue: the real people who shared real pain in When the Levees Broke now sound like mouthpieces, set there to make proclamations rather than to be part of a grand, complex tapestry of voices. Time benefits Lee’s project in many ways—former FEMA head Michael Brown’s willingness to speak frankly offers one of the biggest missing pieces of Lee’s first Katrina doc—yet the unfortunate irony of If God Is Willing and da Creek Don’t Rise is that despite its moments of great revelation and insight, it feels more id-driven with the gift of hindsight than Levees did in the heat of the moment.