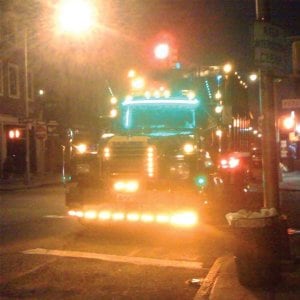 [xrr rating=3.0/5]Like any band whose nascent period prompted genre descriptors such as “noise,” accessibility has not been Deerhoof’s strong suit even as the group has churned out album after album and honed their sound into something decidedly svelter. Though their formation began at a time in which both Kurt Cobain and Jerry Garcia were still drawing breath, throughout the past 18 years Deerhoof has never risen to the level of prominence you’d expect from an act whose LPs are nearing a dozen. But without the acrimony that so often plagues musical partnerships, Deerhoof has managed to keep creating (and to have fun doing it), and they’ve been cited as influences by such acts as St. Vincent, Sleigh Bells and Of Montreal. Yet, despite somehow prompting Pitchfork to hyperbolically declare them to be “the best band in the world,” Deerhoof is still more likely to warm the stage for those bands they’ve influenced than to melt faces in their own right.

The band’s new album Breakup Song fits that same mold. Clocking in at barely 30 minutes, its 11 tracks are rife with artfully obscure sounds that are sleekly produced. As usual, it’s quirky and technically sound, but in the end it may provide more influence to other bands than achieve lasting relevance on its own. Opening track “Breakup Songs” doesn’t waste time easing the listener into the Deerhoof experience, instead plunging directly into a halting drum beat, industrial machinations and guitar fuzz. As always, this clatter is counterbalanced by Satomi Matsuzaki’s deadpan munchkin vocals repeating a handful of lyrics in a chirping mantra. The hypnotically affectless vocals make Breakup Song’s title almost a tongue-in-cheek misnomer since anyone who would turn to this album for comfort at the end of a relationship is most likely an android.

“Bad Kids to the Front” employs a digitized organ grinder effect that sounds like a game of Dr. Mario about to be lost. Meanwhile, “Zero Seconds Pause” turns the guitar fuzz up to 11, and Matsuzaki chants, “Now I am going dancing” to imbue the track with both airiness and heft to the point of making it one of the true highlights. “Flower” may be the record’s most accessible song, with a danceable bass groove and head-bouncing work on the drum kit. As Matsuzaki repeatedly coos, “Let it go, leave it all behind,” this upbeat track constitutes the closest Deerhoof gets on this album to an actual breakup song.

From there it’s more of the same. “To Fly or Not to Fly” has a harder edge, going industrially palatial throughout the sub-two minute track. “The Trouble with Candyhands” (one of the better song titles I’ve encountered recently), showcases some horns alongside Matsuzaki again repeating lines about flowers. “We Do Parties” motors forward with a funky guitar groove, and “Mario’s Flaming Whiskers III” may be the most sonically diverse song, with quick changes in tempo and a heavy dose of guitar along with catchy drums and soaring synth notes.

Breakup Song is complex enough to require headphones for full appreciation, and there are a couple tracks worthy of making it onto a mixtape. While it’s far from a somber record, some of the hyperactive fun from previous Deerhoof efforts is lacking here. After all these years and nearly a dozen records, Deerhoof appears to have grown more straight-laced. Sure, their sound still defies easy classification, but having influenced so many other indie musicians, their oddity has plenty of company in today’s musical landscape. There’s little doubt that Deerhoof will keep plugging along, creating new work and continuing to tour, but for a band who never rose to the kind of prominence that matches their critical acclaim, Breakup Song may be an indication that they’re past their prime.