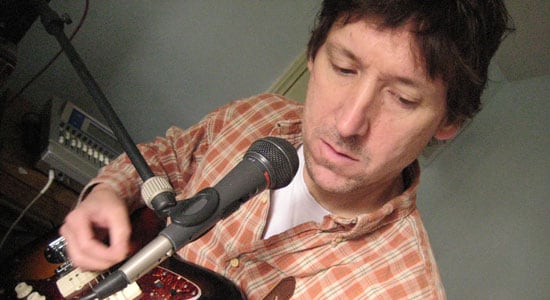 It’s been more than a year since the release of East River Pipe’s last full length album, We Live In Rented Rooms, so it came as a very pleasant surprise when F.M. Cornog agreed to an email interview. Maybe it shouldn’t have, as Cornog has never followed the usual blueprint to being a recording artist: he doesn’t tour, still records all his songs solo at his home studio and releases albums at his own pace. As a songwriter he’s been woefully undervalued for years, and his 1999 album The Gasoline Age is one of the greatest road records of any decade. I’m pleased to present the Spectrum Culture interview with F.M. Cornog.

Thanks for taking some time to talk today. What have you been up to since the last album?

Hi, Eric. Well, I work 40 hours a week at a Home Depot near me. I’m also the father of a 10 year old girl, and a husband, and I own a small house which needs constant maintenance, etc., etc. Hmmm… I also spent a lot of time down in Zuccotti Park last year at the start of the Occupy Wall Street Movement. And, of course, I’ve been pecking away, little by little, brick by brick on a new album.

A lot of what’s been written about you focuses on your past issues with drug addiction. Are there any inaccuracies or misconceptions about this period that you’d like to clear up?

Well, for one, I was NEVER a happy-go-lucky, cute, harmless, street urchin, acoustic guitar busker. I NEVER busked. That is a total myth. I was too busy trying to destroy myself. I was a one-man self-destruction factory. Wake up, drink, drug, pass out…wake up, drink, and drug, and pass out. I didn’t have time for music, because I was too busy getting fucked up.

Another thing is…writers also seem to think that I met Barbara Powers and then she waved a magic wand and all the bad stuff magically went away, and now I’m clean and I don’t have depression and everything is just fuckin’ great… happy ending. How fuckin’ American. Now wrap it up in pretty paper, and tie it up with a beautiful bow.

Do you feel that critics tend to too often view your songs as purely biographical or see everything as a product of your past?

Hmmm… for starters, whatever songs I’m writing are products of my present, not my past.

I’ve read various accounts of how you came up with the name East River Pipe. What’s the real story?

That story people have gotten right. Barbara and I lived in Queens for over a decade. We lived a block away from the East River. One day I was down by the river and I saw a sewage pipe spewing raw sewage into the East River, and for some reason something clicked. I thought, “I am the pipe, my songs are the sewage, and the river is the world. I’m spewing more sewage into an already polluted river.” So that’s the story. I’m not big on self-esteem, obviously.

Out of all your albums, The Gasoline Age seems the most focused on a very specific location, almost like a certain stretch of highway in New Jersey. In what ways did New Jersey – or maybe the popular concept of that state – influence the album?

After Barbara and I moved out of Queens, we bought a small house in New Jersey, and I went to work at The Home Depot. I had a Geo Prizm, and many nights I’d just go out driving with absolutely no destination, just to reacquaint myself with New Jersey. Eventually those nighttime rides worked their way into the lyrics of that period. I don’t know… for better or for worse, New Jersey feels like home to me. I grew up here.

I guess we shouldn’t expect a live album anytime soon. Have your views on touring changed?

No. I really don’t like being the center of attention. Never have. I run from the spotlight like a roach runs under the refrigerator when you flick on the light at 3 am. But to be completely honest, even if I did have plans to get some little band together, I wouldn’t tell people until it actually was something. I do most things quietly, with a minimum of fuss and ego and static and drama.

I’ve always been curious as to whether your Home Depot co-workers are familiar with your music and if so what type of reactions you get.

No, I’m very, very low-profile about my music at Home Depot. I don’t want people to know. What would be the point? I don’t care if people know I’m a musician. When my co-workers and I talk about music, it’s usually about popular stuff like Rihanna, or Katy Perry, or Jay-Z, or Coldplay or Nicki Minaj. Sometimes the older guys talk about classic rock. Nobody at my Home Depot even knows who Arcade Fire is. And if they don’t know who Arcade Fire is, they sure as fuck ain’t gonna know who East River Pipe is.

More and more indie artists are licensing songs for commercials, video games, etc. Have you ever been approached to do that?

Just movies and TV shows so far. No commercials or video games. I’m hoping to land an adult diaper commercial!

I read somewhere that you were possibly going to join Lambchop years ago?

Hey, if I lived in Nashville I’d lobby Kurt and the guys to be in that band in some way, shape or form. I love Lambchop. I love their restraint. They don’t pander. They are just completely singular.

What’s your writing process like? By all accounts domestic life has been good to you, but has this made writing songs more difficult?

Yeah, it’s made it more difficult. Time wise, I don’t have nearly as much time as I’d like to. Years ago I had long stretches of time with no interruptions. Nowadays, like I said before, I’m a father, a husband, there’s my dog, there’s this little house, and I work 40 hours a week at Home Depot. Finding time for music is like a guerilla war now…attack, retreat, wait…attack, retreat, wait. Little bursts whenever possible. It’s frustrating. I wish I had more time to write and record, but you have to make choices in life, right? I’d rather that my girls have time to explore things and have fun. When they’re smiling, I feel like I’m succeeding in life.

Which East River Pipe album are you the most proud of?

I’m not proud of any of them. They just are what they are. I’m almost embarrassed by them. They’re all recorded poorly on little mini-studios, with no good mics, and no real studio gear… so my albums can sound kind of anemic, like demos. As a musician and a singer, I work pretty fast, and I keep in a lot first takes with off-pitch singing or wrong notes. But hell, that’s East River Pipe.

Hi, Eric’s wife. Well, “Silhouette Town” could be any suburban town. It’s no specific place. It’s about being young and trying to escape whatever small town you were brought up in…either by physically leaving town, or by mentally leaving by obliterating your mind with whatever substances you can get your hands on.

One of my favorite lyrics of yours is “There’s beauty in hell/ But that’s no game” from “When You Were Doing Cocaine.” What inspired that song and particularly those lyrics?

For me, that song is about a love triangle and the emotional complexities a thing like that entails.

Those lyrics? …Well, I guess that means that one can only stare into the abyss so many times before the abyss consumes you. So, be careful.