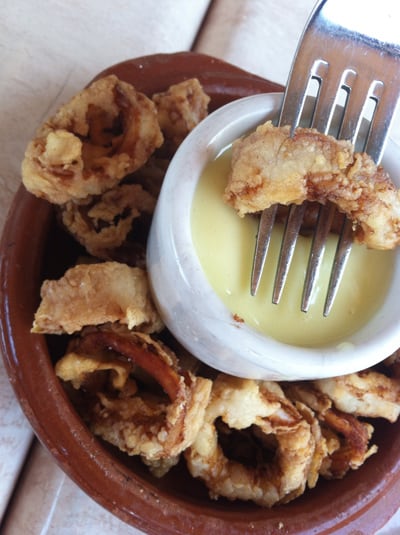 One of the greatest things about the proliferation of the Spanish approach to cuisine in the U.S. of late has been the addition of small plates to varied menus across the country. Some of those establishments have about as much to do with the famed tapas bars of Spain as the New York Giants do with Real Madrid, which is to say nothing at all. Regardless, incorporating the ethic of tapas, the sharing of many small plates communally, makes them the better for trying it, even if the cuisine isn’t necessarily “authentic.” Indeed, small plates have become so ubiquitous that there has been something of a backlash to it among various food blogs, decrying the fact that it’s easy to be lured into spending much more than one would following the rote appetizer/entrée/dessert format. It’s a jaded argument and one that is refuted by two recent bi-coastal dining experiences I had. The restaurants, Barrique in Babylon, NY and PrepKitchen in La Jolla, CA, took decidedly different approaches to the cuisine behind their small plates, but both were successful regardless.

On the east coast, Barrique, in the heart of downtown Babylon, doesn’t have the word tapas anywhere on the menu, and a Spaniard would scarcely recognize the majority of the dishes. That being said, Barrique as we know it wouldn’t exist without that tradition. The food coming out of the kitchen into the 30-seat dining room is decidedly American. Pizza, French fries, meatball sliders and mac and cheese have all made appearances on the menu since I began eating there in the early spring. A velvety smooth dish of chicken in cream sauce, termed farm house chicken on the menu evoked my Mom’s old chicken divan and lined up more with the traditions of ’80s American suburbia than any old bar outside Barcelona. Served in a tiny cast iron crock, accompanied by mushroom studded bread pudding, it was a tonic for April’s chill. Equally warming were the braised short ribs in red wine.

The menu at Barrique changes consistently and with good reason. I couldn’t imagine eating piping hot chicken at the outdoor seating area that lines the sidewalk during the humid, south shore summer. More appropriate for the weather is a simple salad of watermelon, feta and curls of torn basil, which the kitchen serves with touched with balsamic vinegar. Hot or cold, the veal meatball sliders feature one of the better meatballs on this end of Long Island and are well worth trying even if it’s hot out. Suffer through it; you’ll thank me. Same for the French fries, served crisp in a paper cone, dusted with Parmesan cheese.

This isn’t to say that Barrique is without its clunkers. The mac and cheese has all of the subtlety of someone setting an air horn off an inch from your ear. Even in the small dose it comes in, it’s too much. The pizzas are serviceable but, considering its location in the pizza capital of the world, probably not worth the money next to the small plates. And for a restaurant with obvious ambition, the tableside service of a variety of pre-made parfaits for dessert falls short. They’re tasty, but it’s an obvious white flag from the kitchen that they’ve given up on dessert to focus on the rest of the menu, which is a shame.

Still, for all of the good food being served there, the smartest thing Barrique does is to market itself as simply a restaurant that serves small plates. The team behind the restaurant lazily could have called itself American Tapas and raked it in trying to capitalize on a trend. That would have been too disingenuous though, and while it certainly owes its debt to Spain, Barrique has earned the right to stand on its own merits. After all, it’s a charming restaurant with simple, American food that just happens to be served on small plates.

On the left coast, and on the other end of the tapas spectrum, lies PrepKitchen, which has three locations in southern California. On a recent trip out west I ate at its location just off the main drag in tony La Jolla. Every day from 3:00-6:00 p.m. they offer a tapas menu, featuring the most authentic replication of the real McCoy that I’ve had the pleasure of tasting outside of Spain. Everything about every dish they served us was superlative. Calamari fritti that were impossibly light and tender, the batter packed with more flavor per square inch than I thought possible in the old fried seafood standby. Patatas bravas may include smoky tomato sauce thinner than I remember it being in Spain, but it’s no less delicious.

It’s not often you see the attention to detail when trying to recreate real Spanish dishes that the cooks at PrepKitchen exhibited. So often restaurants that try to recreate this end up being facsimiles of the real thing and fall short, unable to grasp the nuances of the cuisine. But from the fat dates stuffed with cheese and wrapped with crisp bacon to the vinegar laden farro salad, every dish we tried that night was spot on. If I lived in La Jolla, I’d be a fixture at happy hour there. I’d also eat there enough to do a full review, but we were just passing through. Maybe the best compliment I can give is that we were just stopping by for a bite to eat with no expectation of reviewing it. PrepKitchen was too good not to share.