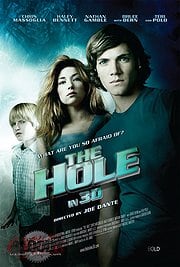 [xrr rating=3.0/5]Delayed from a proper U.S. release for years, Joe Dante’s The Hole finally limps out to no fanfare, a limited 3D release and a home video debut not a week later. An ignominious treatment, but one that marks but the final injustice for a film seemingly destined not to reach its target audience. Dante aims this horror film at children, a dead giveaway of it belonging to a bygone era. One sign of this is its PG-13 rating, given for a bit too much cursing and some terror deemed too much for the unsupervised. Were The Hole released in the 1980s, Dante’s commercial peak, he could have skirted by with a PG and a chance at reaching some of the kids it seeks to creep out and instruct.

Then again, Dante surely recognizes the unlikelihood of a PG-13 horror film becoming a hit for the family crowd, and if The Hole’s plot and scare structure serve more as tense kiddie fare, its window dressing caters to grown-up crowd of auteurist admirers and plain movie geeks who make up the director’s core constituency. This is a film that names an abandoned factory the “Gloves of Orlac” in a reference to a silent horror film from Expressionist pioneer Robert Wiene. As such, The Hole may come off as seeking cult appeal over its primary objective of spooking kids. At its best, however, The Hole’s seeming inability to read its crowd masks a willingness to approach younger viewers on respectful grounds, putting faith in their ability to confront more dangerous, challenging material and see their way through it.

Amusingly, some of the biggest concessions to children—especially the reduction of plot setup to merely a few minutes—will likely be appreciated most by older audience members happy to see a horror film get to the point. The Hole introduces its small cast with admirable speed: overworked single mom Susan (Teri Polo) moves into a home with her morose teen son Dane (Chris Massoglia) and her more vivacious, innocent youngster, Lucas (Nathan Gamble). The two boys make the acquaintance of the cute girl next door, Julie (Haley Bennett), and they run straight from this meeting to their basement, whereupon they find a door held in place with multiple locks. Naturally curious, they find keys nearby and open the door, finding only an abyss that seems to sink into the Earth forever.

In no time, Dante replaces the wryly flat warmth of small-town suburbia with an incessant sense of dread. Showing off his razor-sharp trad-horror chops, Dante typically avoids jump scares; in fact, most of the ones that can be found in the film are peevish fake-outs, sudden turns into an ally, not a monster. Rather, the director prefers to set a mood of eerie, mounting fear and stick to it, opting for a slow crescendo rather than sudden spikes of horror. As the three kids attempt to figure out what exactly is down that endless hole, the audience gets the increasing feeling that they should just lock the door how they found it and never look back. And when something finally does escape that pit, it manifests itself as each individual’s darkest fears. Smart enough to know that one’s darkest fears need not leap out at a person but merely exist in their vicinity, Dante lets sentient clown dolls, eerie girls and a giant shadow figure move deliberately into the kids’ line of sight.

Like most of the human characters in Dante’s films, the kids are thin and banal, their only interesting moments coming from surreal, satiric interludes like Phoebe Cates’ infamous Christmas story in Gremlins. Bennett, who incidentally gives one of the better young performances to grace a Dante film, plays that role here, appearing early in a shirt reading, “I’m not a fairy tale princess” and offers a hilariously desensitized reaction to the hole when its significance becomes clear: “I know what you’ve got,” she says.” You’ve got a gateway to Hell under your house. And that is really cool.” These amusing touches confirm the film as a Dante number, but otherwise the director hasn’t made such a straightforward horror film since his work with the Twilight Zone movie and resurrected TV show. More so, perhaps, as even those works, like his more recent Masters of Horror segments, contain overt displays of social commentary.

In place of that, The Hole seeks merely to instruct children on confronting their fears. But though the movie does contain one caricature of the banalities of childhood phobias in the clown doll that haunts Lucas, The Hole dares to suggest that many young people’s greatest hangups, like those of adults, are rooted in real traumas and real failures they bury within themselves. The monsters who stalk Dane and Julie are slowly revealed to be specters of their past, warped into paralyzing, grotesque shades of the real figures who dwell in the dark recesses of their shame. The Hole thus joins a recent, welcome spate of children’s horror films (Coraline, ParaNorman, etc.), in which young audiences relentlessly pandered to for years finally get the opportunity to face fears both real and imagined and emerge stronger from the ordeal. If Dante’s film does not match the aforementioned demented fantasies, or the anarchic height of his own masterpieces, it nevertheless makes for delightfully dark family entertainment. We could always use a bit more of that.