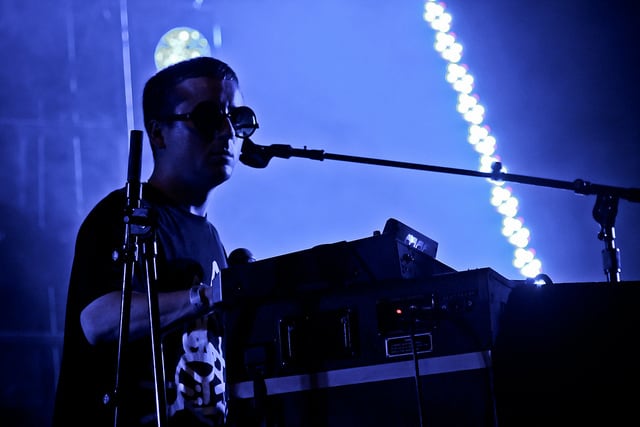 I’ve only seen it happen once or twice before in the two decades I’ve been attending concerts. Hot Chip had just finished a radical re-working of hit “I Feel Better,” capping a strong encore following a triumphant show at Portland’s Crystal Ballroom. The band bowed and left the stage. The crowd pounded and shouted for more. The lights came up. The incidental music started. We all headed to the rear of the auditorium. Suddenly, the music stopped, the lights dimmed and the band returned to the stage. A good 50 percent of the audience had already escaped out into the night. Someone in the band wondered aloud if this was the first time Hot Chip themselves had ever done a second encore. Then they played new song “Let Me Be Him,” a bittersweet treat for those of us who had stayed behind.

Rewind 100 minutes and Hot Chip took the stage amid the dazzle of strobe lights and smoke, launching right into Made in the Dark’s “Shake a Fist.” The Crystal Ballroom installed a new sound system (I’ve been complaining about the old one for years) and the separation was instantly noticeable. The bass and drums no longer canceled out the high end, allowing the synths and guitar to ring through on “And I Was a Boy from School,” much to the audience’s delight. The dancing began almost immediately and it barely let up.

It’s a rare thing to look at your watch at show and see that, especially one that is standing room only, the first hour had flown by. Hot Chip kept things upbeat and we kept on dancing as they tore into new album In Our Heads, tossing in hits and chestnuts from past ventures along the way, kicking off the new selections off with “Don’t Deny Your Heart.” One of the best received songs of the evening was “One Life Stand,” from the album of the same name, an archetype of what Hot Chip does best live. Like many songs, “One Life” begins with a driving beat, one that becomes more frantic until the band stops, breaks it down and then bursts into life again. It is an old trick, but it drove the crowd mad time and time again. New song “Night and Day” followed with the same, successful ploy.

While the band rocked hard and the light show was all Matrix razzle dazzle, the only sore spot of the evening was singer Alexis Taylor’s voice. Breathy and expressive on record, Taylor came off as less seductive and more bleating in a live setting. On the other hand, during the few moments Joe Goddard had the opportunity to sing, he perfectly captured the shining soul of what makes Hot Chip tick.

Following the dance attack of “Over and Over” (and just cresting the hour mark), the band slowed things down for new song “Look at Where We Are.” The ballad broke the spell. The confused dancers aimlessly wandered to the bathroom, chatted and headed to the bar, waiting for the tempo to increase. It didn’t take long as the disco sounds of “These Chains” picked things back up again and off we went!

The rest of the set coasted by, including hit “Ready for the Floor,” a cover of Fleetwood Mac’s “Everywhere” and finishing up with Made in the Dark’s “Hold On.” When the band returned they reached way back to 2005, pulling out “Crap Kraft Dinner” from Coming on Strong before ratcheting it up with “I Feel Better,” newly born without the Madonna faux strings. But by that point, a lot of people were already out the door, unwittingly missing a chance to see Hot Chip history coalesce.