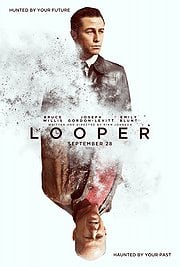 [xrr rating=2.5/5]Despite the seemingly endless freedom afforded by breaking into the fourth dimension, cinematic time travel is no easy undertaking; invoking it has a nasty habit of raising more questions than a film is possibly capable of handling. It’s a siren call drawing one film after another to failure, or at least onto the shoals of severe narrative confusion. The latest is Looper, a well-meaning, generally thoughtful thriller that gets tripped up by its elaborate internal mechanics.

Director Rian Johnson starts things off on the right track, introducing a semi-post-apocalyptic Kansas City, circa 2042, a world mired in a slowly circling downward spiral. Living amid the vagrants and the marginally updated technology is Joe (Joseph Gordon Levitt) is an assassin charged with handling detritus from a time-travel possessing 2072, executing gangland victims who are deposited, bound and blindfolded, through some temporal slip. It’s easy work, until Joe gets tasked with disposing of his own future self: he freezes up, and Old Joe (Bruce Willis) gets away, determined to fix some things that lead to the distant future being seriously screwed up.

This is where things get messy. The film tries to extricate itself from the surfeit of questions that erupts through a bit of typically gruff Bruce Willis pique. He bristles when asked to explain how this time travel works, shouting, to paraphrase, that ‘if we start getting into this stuff we’ll be talking for hours.” This is played for knowing laughs, but it’s a significant moment, the first sign that the film can’t handle the burden of its chosen genre and will henceforth be operating according to its own internal logic. This would be fine, if Looper were a simple action romp. But the film is fundamentally concerned with ideas, dialogue and narrative structure, concepts that it’s eventually forced to tend to at the expense of pacing and action.

This is why, instead of opening up new avenues, the time travel angle forms a vacuum that sucks in the entire story. There’s so much to explain that the cat-and-mouse game between the two Joes is halted in its tracks, with the film’s last hour settling into an extended farmhouse scenario, resulting in a bisected structure redolent of Nicholas Ray’s On Dangerous Ground. This shift has organic antecedents in the first half of the film, but still feels jagged, with entire characters, storylines, visual motifs and dynamics getting scrapped in favor of simmering barnyard tension and a schlocky redemption story angle.

There’s also a super-cute child with superpowers, a drably exploding body and the most obligatory, lifeless score-settling scene in recent memory. Pitted with shortcomings and holes, Looper represents a director growing aesthetically but not internally. While it sheds much of the irritating affectation that made The Brothers Bloom a nigh-unbearable exercise in Wes Anderson aping drollery, the film still has the rickety, overly complex construction of something whipped up in a Red Bull haze for a creative writing workshop. So many hacky shortcuts are taken to nudge the plot along, and so many potential questions are brushed aside, that Looper ends up as a frustrating exercise in excess, an overly complicated movie that ignores the strengths of the firm, basic concept at its core.

From the Vaults of Streaming Hell: Alexandria…Why?

Elucidates why some nations might imagine invasion as a form of liberation, freeing them f…