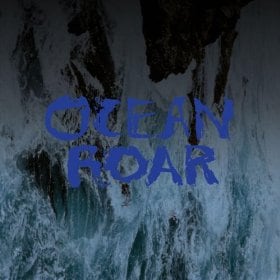 [xrr rating=3.0/5]What Mount Eerie’s rocky Ocean Roar doesn’t lay direct claim to, its predecessor and ostensible twin Clear Moon mostly covered in May, couched in the latter’s gentle starkness. (Same goes for descriptors – storms and winds, waves and washes, blasts and torrents – that crop up in both.) And indeed Ocean Roar is largely a full-throated restatement of Clear Moon’s values, building on the dark San Juan Islands/Puget Sound tableau first sketched out there. And while it doesn’t feature the sighing, drawn out cycles of its most immediate predecessor, Ocean Roar readily substitutes the forest silences that are transgressed – and transcended – there for an inverse homeostasis: heavy sound and clawing noise broken up by brief reprieves, expansive lulls and intrusions of guitarist-vocalist Phil Elverum’s hushed vocals.

In ringing declensions and slamming rhythms that pass overhead and fade into the distance like roiling clouds as Elverum’s subdued voice makes its first such intrusion, “Pale Lights” sets Ocean Roar’s conflicted tone early. Constructing a dusk scene, organ billowing in organic patterns as cascading percussion hammers a pervasive wall of guitar noise, Elverum notes, “Pale lights from other islands,” at the outset, then, tellingly, “a small yelp on the wind” and “more roaring.” Against this miasmatic swirl, Elverum affords only a meek “‘Who is there?’/ I call.” But if the short rests in “Pale Lights” were only eyes left in that track’s storminess, the softly lolling title track is the only substantive respite Ocean Roar gets. Hopscotching percussion rides ethereal threads of starry instrumentation and backing harmonies, hovering over Elverum’s hushed vocal stylings and carried out with the exuberant cries of children and applause placed in the mix. Then “Ancient Times” leads in with more sounds from children at play, languid piano and Elverum’s whisper, but fades in a little over a minute to give the album over to the ponderous piano dirge “Instrumental,” on which guitar buzz lays itself flat along the spines denoted by twirling wind instruments.

The follow-up to “Instrumental,” the appropriately titled “Waves,” sees Elverum and company dissolved almost completely into the track’s glittering soundscape. Skittering cymbal, explosive and heavily distorted tremolo and pounding rhythms launch themselves relentlessly against Elverum’s dozing form, “sleeping on the sand” at first but gradually “woken up by a strange lull in the roaring.” Elverum now seemingly bent on annihilating the record entirely with noise, an unsteady dissipation grips Ocean Roar’s back half. “Engel Der Luft” matches the tumult of “Waves,” drawing choppy waters close to the track’s shores, no better a counterpoint to the relative peace of Clear Moon’s doldrums. But “I Walked Home Beholding” inverts the formula again, unfolding in gently aspirating keys and patient hi-hat. The closing “instrumental” sets Ocean Roar on its chosen path again, Elverum’s guitar scraping a hollow out of the album’s bedrock and washing the resulting sediment out to sea and certain assimilation.

Paired with Clear Moon, the two albums make a powerful combination. On its own, Ocean Roar’s merits are less secured. It’s not quite apparent why the release required splitting in the first place, as a Clear Moon/Ocean Roar double LP would have made a more forceful artistic argument than dividing them up. By curbing the momentum of each this way, leaving them like half-told narratives, both records lack the dynamism resulting from their being played side by side (particularly Ocean Roar), an effect only otherwise achieved by Mount Eerie in concert. With “Through The Trees pt. 2,” “The Place Lives” and “House Shape” played as lead-in to the massive “Waves,” the inescapable “Pale Lights” and thrashing “Engel Der Luft,” it makes Ocean Roar feel less like the fraying, noisome stray ending it is, and the two album arc a more complete work.