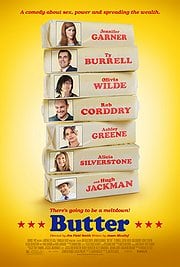 [xrr rating=1.5/5]Butter swings so wildly between its broad satirical sketches that figuring out what, exactly, it wishes to parody is a crapshoot. It presents a world populated by precocious black orphans, vegan yuppies, thick-headed salesmen, crazy strippers and an ambitious housewife who speaks in folksy chirps and whines. The latter offers the closest thing to focus in this loosely connected ensemble piece: in fighting to preserve her family’s local legacy, Laura Pickler (Jennifer Garner) finds herself taking out her own weaknesses as a human being on a charismatic, skilled, young black person. So, maybe, Butter is some kind of analogy for Sarah Palin’s role in the 2008 presidential campaign?

This, dear reader, is what is known as a “reach,” because damned if the film reveals a point without one. With so many caricatures all gathered around the goofball subject of butter carving, nothing exists to ground the movie, to give its humor a target. The wan comparison of the film’s subject to politics is not so far-fetched when one considers the back-room deals and aggressive campaigning seen during the film, with the powers that be forcing a dominant talent, Laura’s husband Bob (Ty Burrell) to retire and a throat-ripping battle for supremacy ensuing in the void. But the film never establishes this as a working allegory for the absurdity of political machinations. Instead, Butter is just arrogant, so snotty in its attitudes toward everyone that it makes even its tacked-on happy ending repugnant in its condescension.

Maybe the casting of so many naturally delightful actors in this nastiness is intentional, but even they look uncomfortable portraying such thin strawmen. Garner and Burrell only fleetingly play up the vicious loathing of their power marriage, and at time they betray a sense of basic human decencies that reveals not depth of writing but an empathy on behalf of the actors that cannot be obliterated. The actors themselves are real, physical beings, which only further tarnishes the incorporeal construct in which they are placed.

But the real display of the film’s bullshit can be found in the plot’s other half, concerning a young, black orphan named Destiny (Yara Shahidi). Destiny’s story is meant to expose both the overt racism and condescending view of race as “exotic” at play in small-town society. But when she winds up in the foster care of Rob Corddry and Alicia Silverstone, their cartoonish upper-middle-class white liberalism should be the crowning absurdity in Destiny’s short life. Instead, the two actors are so pleasant and understanding that any discomfort Destiny might have around them instantly dissipates, even as the script continues to call on her to feel some throughout the movie. And what of Shahidi herself? In her voiceovers, the poor girl must go on about “crackers,” a word she uses so flatly that it is clear even this child cannot believe she has to read such nonsense. Around the other actors, though, she has such a natural presence that she manages to steal the movie from a host of talented professionals.

At times, the film manages to be funny almost in spite of itself. Non-sequiturs such as, “There’s Advil in the kitchen for your penis” work well, and Kristen Schaal actually manages to play to her oddball stereotype where the others so often clash with theirs. The hushed, vaguely concerned way with which she says, “I haven’t heard that word since my dad died” when someone drops a c-bomb is the funniest moment of the entire movie. But these isolated laughs provide highlights for the wrong reasons, exposing the weakness of the comedy relevant to the characters or their broader situation. But if Butter roots its perceived satire in the “you betcha” populist ignorance of Sarah Palin, it ultimately validates her characterization of Hollywood and its backers as a coastal elite with no regard for the flyover states. One part of America certainly comes out of this looking stupid and laughable, and it’s not the Midwest.