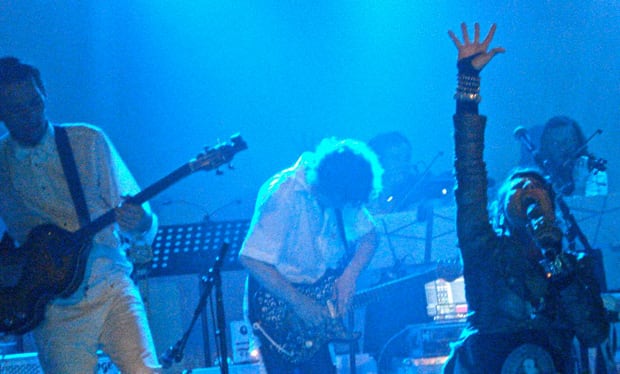 This summer Amanda Palmer (formerly of duo the Dresden Dolls) found herself at the center of a stir surrounding paying guest musicians for their time. Citing financial constraints, the transgressive artist reached out to her substantive social media following to find musicians in cities she’d be stopping in on her upcoming tour who’d be willing to round out a backing orchestra for free – or near to it. Given the high profile $1.2 million she had raised on Kickstarter earlier in the year and the incessant acrimony surrounding any discussion of the struggling music industry’s future, a clamor emerged – with all attendant ad hominems and non sequiturs.

Thankfully, this unintended irony, of efforts to recruit volunteer musicians to fill out a backing band – dubbed the Grand Theft Orchestra – leading to accusations of ripping off musicians, Palmer settled in favor of compensating helping hands more than just in beer, merch and hugs. Nevertheless, it was with an already robustly promotional spirit that Palmer appeared at Portland’s Wonder Ballroom with her orchestra and openers Ronald Reagan, the Simple Pleasure and, most notably, Jherek Bischoff (all, it should be noted, whose pay was never in question).

Appearing in a too brief slot, Bischoff led his band with a more subdued version of the grace of fellow Parenthetical Girls member Zac Pennington. It was a rapid fire set that still remained relaxed and found its breathing room between the broad measures and chords of Bischoff’s compositions – yawning strings, temperate percussion and heavy dramatic sweeps. Given the narrow window allotted him, and his turn as Palmer’s bandleader later in the evening, the set’s purposeful brevity was practical as well as a boost to the overall energy onstage.

For roughly 30 minutes, Bischoff and band brought most of the highlights of this year’s pastiche-classical Composed to bear. They closed with a natural choice from the record – the David Byrne-led “Eyes,” with Bischoff standing in for the former Talking Heads frontman. Cascades of strings and swarthy, tamped-down rhythms buoyed Bischoff idly skipping down the scales of his mandolin’s frets mouthing the tune’s very Byrne half-sensical anatomical musings. His broad toothy grin and cool demeanor reappeared later to guide his band, Palmer’s local conscripts and openers Simple Pleasure and Ronald Reagan in a fuller, orchestral style. 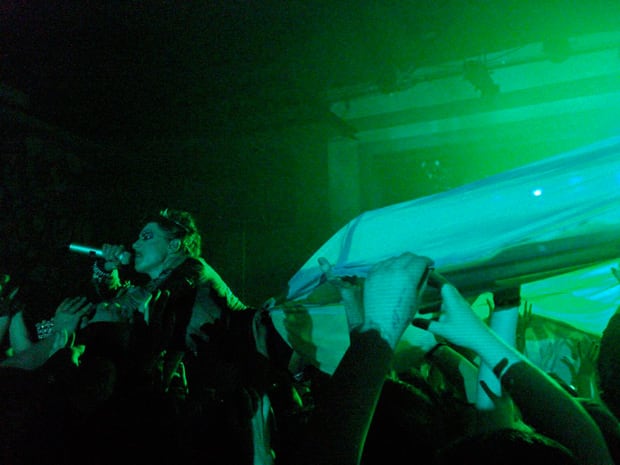 While the show’s culmination, in nearly everyone who played beforehand playing again as Palmer’s backing band, inadvertently limited the opening acts to short sets, it had an unintended advantage during the orchestra’s near two hours onstage. While there was enormous breadth to the sets that preceded the orchestral stretch, with Bischoff eliciting the highbrow and Ronald Reagan diving into ‘80s covers kitsch via saxophone, backing Palmer the players lent a jittery freshness to her music that was at once expert and accidental, spontaneously ad hoc (having rehearsed in that particular incarnation only once on the day of the show) and – thanks to Bischoff – tastefully arranged.

For about half the set, solo artist Palmer’s presence was inflated to a nine-piece ensemble, with the rest split between some combo of strings, horns and percussion backing her along with Bischoff and guitarist Chad Raines. From the start the set followed the track progression of newly minted September release Theatre is Evil. “Smile (Pictures Or It Didn’t Happen)” was synched to a montage made up of photos submitted by fans ahead of the concert, followed by a stripped-down version of “The Killing Type.” A gawky Bischoff grinning off to the side, Palmer and band blazed through “Want It Back,” the revolving music box tones of “The Bed Song” and an audience participation interlude involving anthropomorphized fruit. With supporting vocals from Bischoff, openers the Simple Pleasure’s disco-glam infusions and the force of the horn section in back, Palmer was lent a strength she did not possess on her own, each melodramatic dip in the music given the heft of full arrangements.

Love Palmer, loathe her, think she’s obnoxious – that’s legitimate material for debate. It’s in any case clear she has mastered the art of marketing herself and her art in a way that allows her to accomplish what most musicians only dream about – a highly functional creative life and total artistic control over those efforts. The detailed merits and methods to this music career set to one (highly critical) side, and the trollish din of anonymous gripes and creaky anachronisms to another (I’m looking at you, Steve Albini), Palmer might be on to something. We could do worse than listen – we may hear the future of the industry rattling around inside there, somewhere.