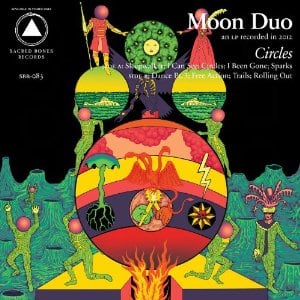 [xrr rating=2.0/5]As a head music aficionado, I was ready to embrace Moon Duo’s trance oriented grooves before I heard a note. They come with San Francisco credibility and a reputation for spaced out, buzzing jams. The PR blurb quoted Ralph Waldo Emerson as an inspiration, “The eye is the first circle, the horizon which it forms is the second, and throughout nature, this primary figure is repeated without end.” The suggestion of interlocking scales and patterns happily set off the hippy detection center in my brain.

I am primed from a lifetime focused on psychedelia, listening to spacey Pink Floyd, the psychedelic pop of Strawberry Alarm Clock and Krautrock like Can. More than any drug thing; it’s more about head space exploration. From rougher garage psych that suggests the ringing echo of close basement walls or trippy jam band wanderings that flow with the winds at an outdoor festival, I am ready to receive the message. But the message on Circles proved hard to find. Listening to the album is more like a Craiglist missed connection. Guitarist Ripley Johnson (Wooden Shjips) and organist Sanae Yamada never quite find my sweet spot. Like Thee Oh Sees, Moon Duo is rooted in a warm, low-fi garage sound. But instead of a lively mix of varied tempos, experimental trippiness and engagement, Moon Duo sets up droning jams delivered with diffidence. The Emerson quote suggests the more modern concept of fractals and that’s another way to consider Moon Duo’s music. Several tracks demonstrate the inverse power of fractal music where the smallest sample (like the first ten seconds) reveals all of the details contained within the whole.

On “I Can See,” the track starts abruptly, waking up in the middle of an endlessly repetitive three chord mantra. The motorik drum beat is softened by a hint of Bauhaus synth wave crossed with the garage rock grind. The vocals don’t add any interesting details because they’ve been compressed into a muddy susurration. Where electronic trance music presents a kind of static surface with details modulating in the depths, “I Can See” is content to remain shallow and hide nothing. The meandering lead is the only relief.

If many of the tunes are thin on ideas, Moon Duo compounds the crime by re-purposing riffs to fill nine tracks with around seven songs worth of material. The closing track, “Rolling Out” takes its groove from the opening song “Sleepwalker.” They slowed down the melodic line and tweaked the ornamentation, but they could have titled it “Sleepwalker (Reprise).” I prefer the slower song, because the lazy pace transforms the droning buzz into a hypnotic loop. In a similar case of reuse, “Sparks” is followed by “Dance Pt. 3.” that both grind their way through a line lifted from the 13th Floor Elevators. “Dance Pt. 3” wipes off some of the dust and shifts the core frequency but stays locked on the same fundamental riff.

The most interesting tune is the title track, “Circles,” which shows off a brighter psych pop feel. Even with the persistent low-fi buzz, there’s more going on here: imagine Blue Cheer covering the Monkees. The vocals stand out in the mix, making it easier to pull some meaning. The guitar solo is almost crystalline compared to the rest of the album. Circles wouldn’t need to make the whole album like this, but if it offered more variation, there would have been more to like.